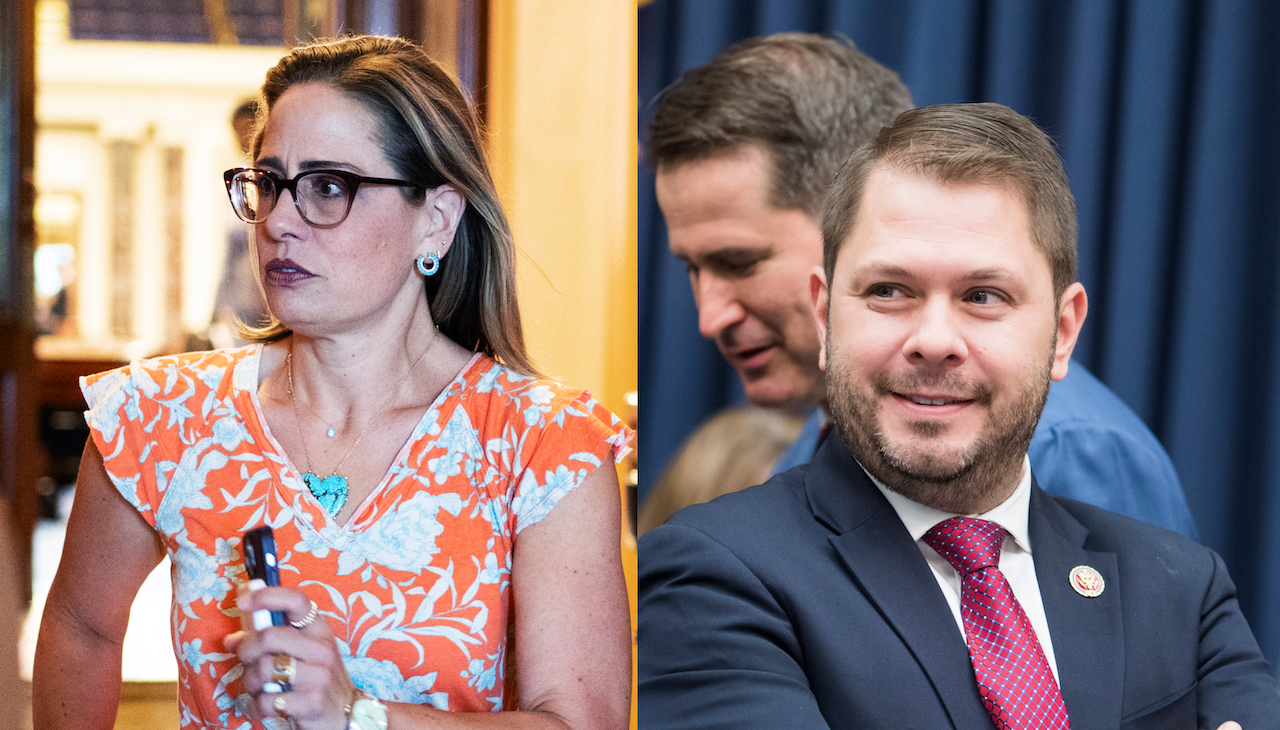 The Latino rep and former marine was one of the few Dems to cruise to victory in Arizona's 3rd Congressional District on Election Night, Nov. 8. Photos: Getty Images

With Ruben Gallego’s win in the midterms, will he challenge Kyrsten Sinema in 2024?

The Latino rep and former marine was one of the few Dems to cruise to victory in Arizona's 3rd Congressional District on Election Night, Nov. 8.

There are currently 77 veterans in the U.S. House of Representatives, with only three being Latino — and one is Rep. Ruben Gallego.

In that time, he’s built quite the legislative record and hasn’t been afraid to share a piece of his mind regarding his colleagues in Congress, the direction of the country and a number of other social issues.

He was elected chairman of the Subcommittee for Indigenous Peoples in the 116th Congress, and also voted for the American Rescue Plan Act of 2021, the Equality Act, the COVID-19 Hate Crimes Act, and for the impeachment of former President Donald Trump.

But it is where he directs his critiques on social media and elsewhere, that Gallego is at his most potent.

A recent figure that has drawn his ire — ever since being first elected in 2019 — is fellow Democrat and Arizonan Kyrsten Sinema, who will be the state’s second U.S. senator for another two years. She’s been part of the one-two moderate Democrat punch in the Senate alongside West Virginia’s Joe Manchin that has stymied a lot of President Joe Biden’s agenda. In the process, Sinema has drawn the ire of not just Gallego, but the Democrats across the country.

Before the 2022 elections, Gallego was speculated as someone who would challenge Sinema in the 2024 election. His answer whenever pressed was that his focus was on the 2022 midterms. However, Gallego’s reelection campaign did release a fundraising ad that addressed the rumors, but was to raise money for his 2022 reelection campaign.

"And anything he doesn’t spend in 2022, he can use in 2024 … whatever he decides," reported The Arizona Republic back in July.

But with the 2022 midterms ending with a resounding win for Gallego, one has to wonder how much of that donation money is left.

“Well, I think the decision is going to be made by Arizonans,” Gallego told POLITICO when pressed on the Sinema issue in April. “Politicians don’t decide this on their own vanity.”

Beyond the vague answer, the Latino vet said he worried about bringing down the entirety of the Arizona Democratic Party in a race with Sinema. But he also said a lot can change, especially in two years.

Get to know: Ruben Gallego

Gallego is a first-generation American as the son of a Colombian mother and a Mexican father. Born and raised in Chicago by his single mother alongside with his three sisters, Gallego was always a worker and spent much of his young adult life working different types of jobs to earn money such as at a hot dog place and a meat packing plant during Summers.

Following graduation from high school, Gallego became one of few Latinos to attend Harvard University, where he earned a Bachelors in International Relations. During college, he kept up his strong work ethic and did various jobs, such as cleaning other students' bathrooms, and became a reservist to pay his way through college.

Despite the work, he still had accumulated more than $15,000 in debt by the end of college.

In 2005, Gallego joined the U.S. Marine Corp. and was deployed to Iraq as an Infantryman. There, he witnessed some of the worst fighting that resulted in a large number of casualties. His company lost 22 Marines and a Navy Corpsman in eight months.

Once Gallego had left the armed forces, he wrote a book about his experiences in the Marines titled They Called Us “Lucky.” It also covered some of his fellow Marines who came from blue-collar towns, immigrant households and the Navajo Nation. He also wrote about how he has dealt with his personal PTSD as a result of fighting.

Ultimately, his experiences as a veteran is what inspired him to run for public office and get involved in local politics. He started out by working on ballot initiatives in Phoenix, where he resides to this day. From there, Gallego served as the Chief of Staff for Phoenix Councilmember Michael Nowakowski and Vice Chair of the Arizona Democratic Party.

Gallego was first elected to the Arizona House of Representatives in 2010. He was the Minority Leader for four years until 2014. In this role, Gallego fought for Medicaid expansion in the state and was able to get in-state tuition for veterans to have education as a plan for when they got out of the services.

He additionally played a big role against fighting the far-right Republicans and their subsequent legislation introduced to curb voting rights in the state, where a lot of voter intimidation has been reported in these midterm elections. Gallego resigned from the State House to run for Congress. His most recent re-election victory gives him three consecutive terms.

In his 3rd consecutive term, Gallego has big plans for some of the country’s most pressing issues such as abortion, inflation and the economy, and immigration and border security in a state that borders Mexico.

Immigration and border issues: Over the course of the campaign, Gallego said he wants to create legislation to allow DACA recipients to serve in the military, broader education expansion and access for veterans, creating permanent pathways to citizenship, and protecting the border.

Economy and Inflation: Gallego hopes to get congress on board with lowering costs all around and supporting families who are struggling to put gas in their tanks, and food on the table. He is hoping to push for a permanent child tax credit, and wants employees to have over 12 weeks of paid family leave, in addition lowering the cost of child care that at the moment, is too far out of reach for many families.

Abortion: Gallego has called the overturn of Roe v. Wade by the Supreme Court an “outrageous” decision. He wants the Senate to pass the Women’s Health Protection Act, a piece of legislation that he has already supported in the House. He looks to codify reproductive care, and expand abortion access, not eliminate it.

Beyond all that, Sinema might face some stiff competition in two years.