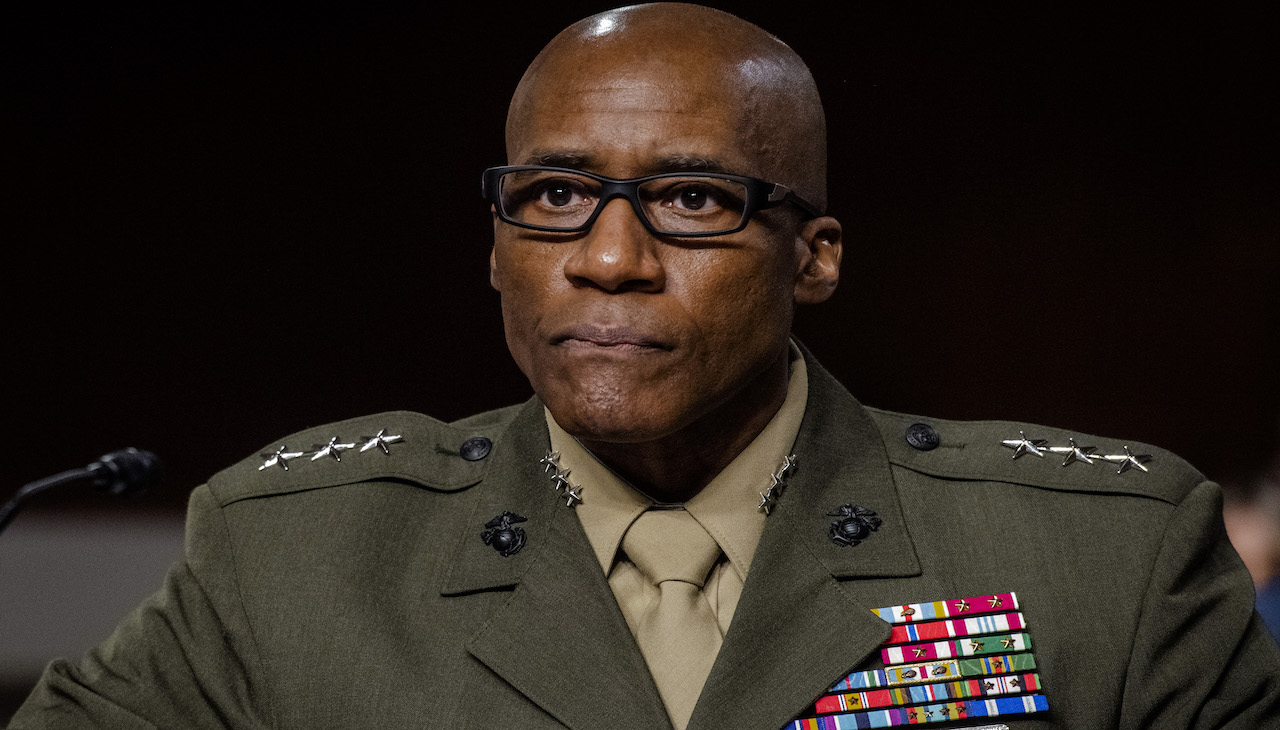 The Marines’ first Black four-star general expected to be confirmed by U.S. Senate

U.S. Marine Corps., Lt. Gen. Michael Langley would be the first Black general to achieve the high branch ranking after more than 35 years of service.

On Thursday, July 21, the Senate Armed Services Committee held a confirmation hearing for Lt. Gen. Michael Langley, who is nominated to be the Commander of U.S. Africa Command, which oversees America’s military presence in Africa. This comes after a career of over 35 service years in the Marines.

A Shreveport, Louisiana native, Langley is the son of a former officer in the Air Force, and a graduate of the University of Texas at Arlington. He holds multiple advanced degrees in National Security and Strategic Studies. Having been a part of the Marine Corp. since 1985, Langley has commanded at every level of holding posts in Afghanistan during the war, Asia, and Europe over the course of his three-decade career.

Black service members have been involved in every American war going back to the American Revolution, as have the racial disparities. In a profile with Stars and Stripes last year, Langley said his experience was largely positive.

"Ninety-nine percent of my experiences coming up through the ranks have been positive ones that can be characterized as opportunities to excel, to gain success… As far as adversity, it came in moments. They were always learning experiences to me. But they were few and far between," he said.

"It is a great honor to be the President's nominee to lead U.S. AFRICOM… I'm grateful to the President for his trust and confidence extended by him… I am enthusiastic to engage across the whole government to faithfully execute the policies and orders of the President and the Secretary of Defense," said Langley at his confirmation hearing.

TAGS
lofanef236
I’m making over $17k a month working part time. I kept hearing other people tell me how much money they can make online so I decided to look into it. Well, it was all true.
This is where i started… 𝐰𝐰𝐰.𝐑𝐢𝐜𝐡𝐣𝐨𝐛𝐳.𝐜𝐨𝐦
jameh77420
Making money online more than $15k just by doing simple work from home. I have received $18376 last month. Its an easy and simple job to do and its earnings are much better than regular office job and even a little child can do this and earns money. Everybody must try this job by just use the i nfo on this page.

Open The Link———–>>> 𝘄𝘄𝘄.𝗡𝗲𝘁𝗖𝗮𝘀𝗵𝟭.𝗖𝗼𝗺
jojadef872
I make 120-200 dollars each hour for working an online job at home. dso I never thought I can do it but my best friend makes 30,000 bucks every month working this job and she recommended me to learn more about it.
The potential with this is endless......>>>>> 𝐖𝐰𝐰.𝐉𝐨𝐛𝐬𝐑𝐞𝐯𝐞𝐧𝐮𝐞.𝐜𝐨𝐦
vekedo2709
𝐆𝐨𝐨𝐠𝐥𝐞 𝐢𝐬 𝐩𝐫𝐞𝐬𝐞𝐧𝐭𝐥𝐲 𝐩𝐚𝐲𝐢𝐧𝐠 $𝟏𝟎𝟒𝟒𝟕 𝐭𝐨 $𝟏𝟑𝟎𝟐𝟓 𝐞𝐯𝐞𝐫𝐲 𝐦𝐨𝐧𝐭𝐡 𝐟𝐨𝐫 𝐰𝐨𝐫𝐤𝐢𝐧𝐠 𝐨𝐧 𝐭𝐡𝐞 𝐰𝐞𝐛 𝐟𝐫𝐨𝐦 𝐡𝐨𝐦𝐞. 𝐈 𝐡𝐚𝐯𝐞 𝐣𝐨𝐢𝐧𝐞𝐝 𝐭𝐡𝐢𝐬 𝐚𝐜𝐭𝐢𝐯𝐢𝐭𝐲 𝟐 𝐦𝐨𝐧𝐭𝐡𝐬 𝐛𝐚𝐜𝐤 𝐚𝐧𝐝 𝐈 𝐡𝐚𝐯𝐞 𝐞𝐚𝐫𝐧𝐞𝐝 $𝟏𝟓𝟐𝟒𝟖 𝐢𝐧 𝐦𝐲 𝐟𝐢𝐫𝐬𝐭 𝐦𝐨𝐧𝐭𝐡 𝐟𝐫𝐨𝐦 𝐭𝐡𝐢𝐬 𝐚𝐜𝐭𝐢𝐯𝐢𝐭𝐲. 𝐈 𝐜𝐚𝐧 𝐬𝐚𝐲 𝐦𝐲 𝐥𝐢𝐟𝐞 𝐢𝐬 𝐢𝐦𝐩𝐫𝐨𝐯𝐞𝐝 𝐭𝐨𝐭𝐚𝐥𝐥𝐲!
𝐋𝐨𝐨𝐤 𝐚𝐭 𝐢𝐭 𝐰𝐡𝐚𝐭 𝐈 𝐝𝐨---------->>>𝐖𝐰𝐰.𝐏𝐚𝐲𝐬𝟏𝟏.𝐂𝐨𝐦
rosalin0goo
Google is presently paying $10447 to $13025 every month for working on the web from home. I have joined this activity 2 months back and I have earned $15248 in my first month from this activity. I can say my life is improved totally!