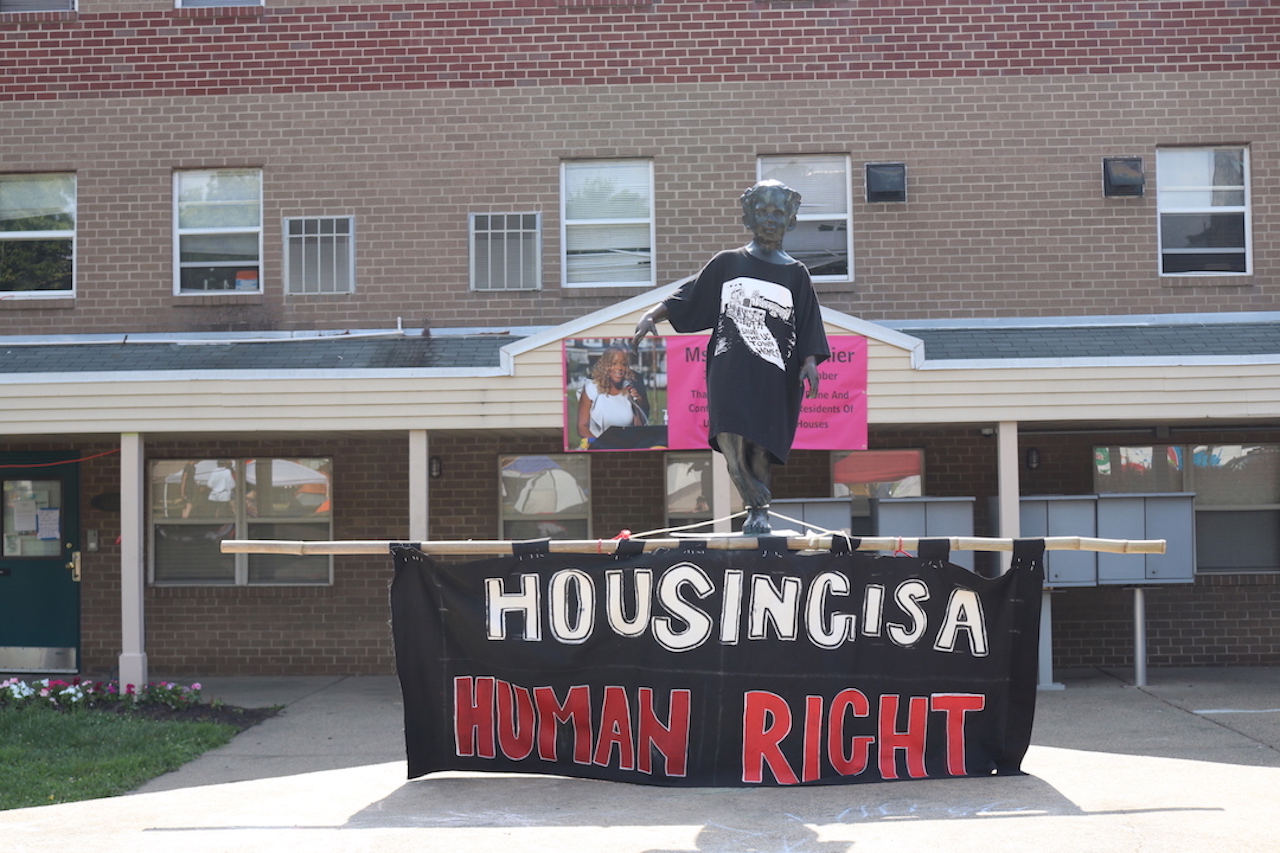 In the wake of the sale of a series of low-income units, UC Townhome residents protest, and demand alternatives.

In July of 2021, Rhonda Moore received a letter from her apartment’s administrative offices alerting her of management’s decision to opt out of renewal with the Department of Housing and Urban Development (HUD). This event would profoundly impact her living circumstances.

A resident of University City Townhomes (UC Townhomes, for short) for over 20 years, Rhonda was suddenly faced with one choice: to leave.

“It was just like a paper, saying that either HUD or [Altman Management Company] is not renewing the contract for [low-income housing]. Something along those lines,” Rhonda recalled.

All Townhome residents received a letter informing them of the building’s next steps and giving them notice to vacate the building and find alternative housing within a year. IBID Associates Limited Partnership had ended its contract with HUD.

The original deadline was July of 2022, but due to ongoing litigation between IBID and the city, the deadline was extended until Sept. 7.

Following the news, residents requested meetings with management, but were met with radio silence. The building’s parent administration, Altman Management Company, did not try to meet tenants to discuss or listen to their concerns.

“We’ve been trying to meet with [Bret Altman] since this whole thing started,” Rhonda said.

After nine months of no communication from the building’s current owner, Bret Altman, residents joined the Save UC Townhomes coalition to protest the sale by way of a peaceful march on July 9, coined ‘Protect the Block Party,’ after which they set up an encampment at one of the townhome’s courtyards.

“This is why we’re out here,” Rhonda said.

Darlene, a tenant of 28 years, raised her family in the Townhomes.

“I raised my children here. They’re all grown up and moved out and doing well. But we have other residents here that are raising children. We have elderly and disabled residents here. What happens to them?” Darlene pointed out.

In a statement to AL DÍA, IBID spokesperson Kevin Feeley said they offered “Tenant Protection Vouchers that can be used to pay for alternative housing anywhere in the city (or anywhere in the U.S. if a resident so chooses); identifying and securing alternative affordable housing options; and covering all costs in connection with relocation.”

Through interventions at the federal level, tenants obtained Enhanced Protection Vouchers, allowing residents to afford rent at the Townhomes past the September 7th deadline.

Another issue that arises through the complex web that is the voucher system is finding housing that accepts them as a form of payment. Sources say that one tenant was in touch with a property owned by the Philadelphia Housing Authority (PHA), but property management told them they did not accept vouchers.

“Find housing for us because the housing that we’re finding is none,” Darlene said, referencing the properties she had seen.

“The waiting list [is] over two years; the properties they have shown us… I wouldn’t let my dog live in them. Have a heart. You can do what you want to do, but you can look out for these residents,” she added.

Management said residents would receive their vouchers by February, but many are just starting to obtain theirs.

“I waited 10 years before I got in here,” said Barbara Martin, a Townhome resident of almost 20 years.

“Once I got in, I thought this would be for a lifetime, and it wasn’t,” she added.

As she navigates through the chaos surrounding the building sale, Barbara is trying to figure out what her next move is, and keep up with maintenance in her apartment complex.

“And again, our representatives are on the site every day to assist residents and to address their concerns or answer their questions,” they continued.

Some have noted otherwise.

“They used to do inspections twice a year. They were coming to the unit and checked the units. They stopped. I think as far as maintenance, it’s up to us to keep them up because we live in them,” Barbara noted.

Additionally, the advocacy group Save UC Townhomes reported, via an Instagram post, that management locked both the leasing office and laundry room. They alleged this was a form of retaliation following the establishment of the camping site on the Townhome grounds.

A post shared by Save UC Townhomes Coalition (@saveuctownhomes)

“The main reason behind all of this is because he refused to meet with residents to come to common ground with the residents,” said Rasheda, another resident faced with being displaced from her unit.

“They haven't fulfilled their promises. We wanted the relocation specialist to work diligently with the senior citizens of the [UC Townhomes] because we have many of them that live here on their own,” she continued.

Rasheda went on to say that “they don’t have anyone really advocating for them, and they’re sickly, so they don’t have the same advantage that someone my age may have for getting around,” she noted.

It is also unclear whether the relocation services are providing special accommodations to the elderly population at the Townhomes.

Affordable housing in the future?

Ongoing litigation has halted the matter of the sale from moving forward after the city passed a measure to place a demolition moratorium. The bill also requires developers to build affordable housing on the complex site.

Councilmember Jamie Gauthier has been on the frontlines in protecting the residents. In a request for comment, Councilmember Gauthier issued the following statement:

“I am committed to obtaining an equitable housing outcome. I have been negotiating/working with IBID/Altman Brothers to obtain this. Through the litigation, we are committed to reaching a resolution that is beneficial for the residents and Philadelphia. We will approach the residents with further details as soon as we are able.”

“We have no comment at all about the specifics of any settlement discussions.”

Though uncertain, residents and coalition supporters told AL DÍA that they will continue to fight for tenants’ rights to afford housing, even after the Sept. 7 deadline, which IBID has no intentions of extending further.

“The encampment will more than likely continue,” said Rasheda.