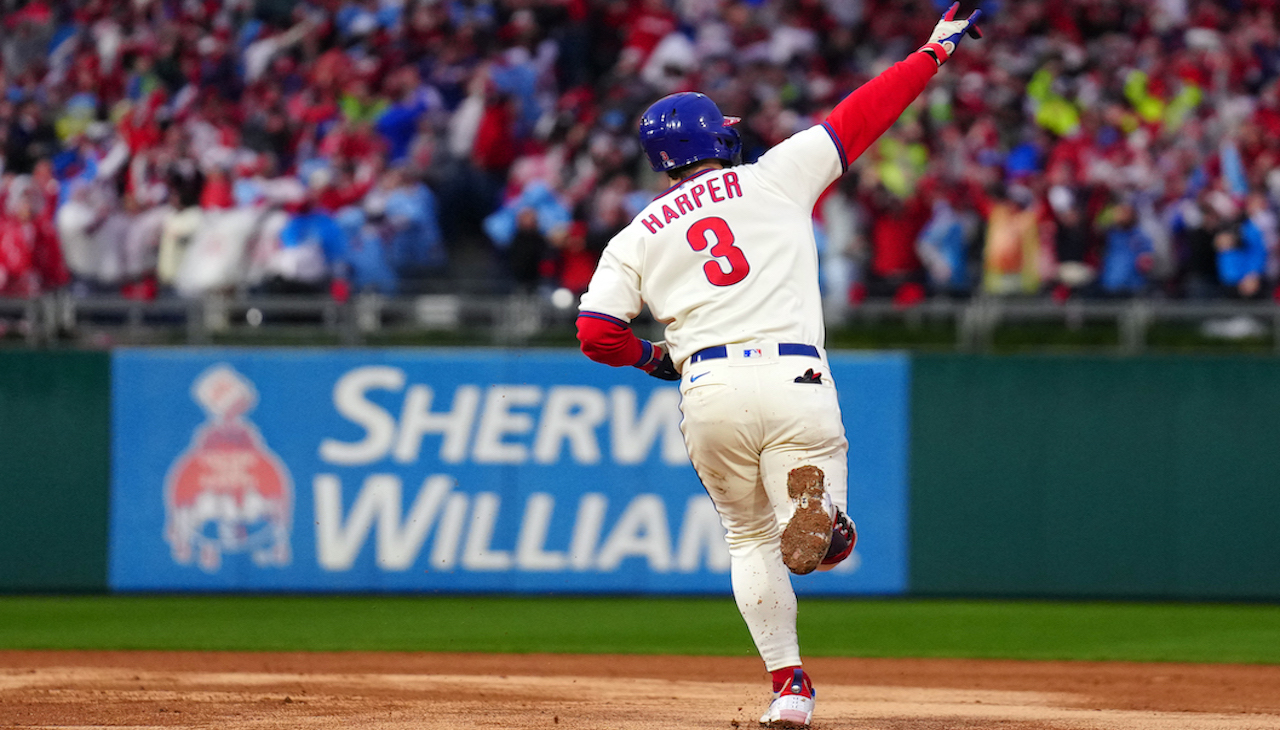 Bryce Harper rounds the bases after hitting his go-ahead homerun in the eighth inning of Game 5. Photo: Daniel Shirey/MLB Photos via Getty Images

It was a sloppy game at Citizens Bank Park on Sunday, but the Fightins did just enough to get back to the Fall Classic for the first time in 12 years.

Bryce Harper hit what will likely go down as one of the biggest homeruns in Phillies playoff history in the bottom of the eighth inning, as the Phillies overcame both the Padres and the elements 4-3 at Citizens Bank Park in Game 5 of the National League Championship series.

The win also clinched the National League Pennant for the Phils and sends the team back to the World Series for the first time since 2009.

With J.T. Realmuto on base after singling to lead off the bottom of the eighth, Harper fouled two pitches off down 1-2 in the count and watched another ball before launching a sinker from the Padres’ Robert Sanchez into the left field seats to give the team its 4-3 lead.

Citizens Bank Park then erupted as realization set in that the team was three outs away from a World Series.

Before that, the Phillies struck first in the bottom of the third with a Rhys Hoskins two-run homerun — his third of the series. Juan Soto responded for the Padres in the top of the fourth with a moonshot as he caught up with a Zack Wheeler four-seam fastball and made it 2-1.

After that flurry, Padres starter Yu Darvish and Wheeler settled down until the seventh inning as the rain poured and muddied the playing field. When Wheeler was pulled after letting up a single to start the seventh, the Padres pounced on three wild pitches from reliever Seranthony Dominguez to take a 3-2 lead.

Following Harper’s blast to reclaim the lead in the bottom of the eighth, Phillies manager Rob Thomson brought in David Robertson for the close, but he was only able to retire the first batter before walking the next two in the top of the ninth.

With one out and runners on first and second, regular starter Ranger Suarez came in to seal the deal, and he did it in just two pitches. The first was a sacrifice bunt by the Padres’ Trent Grisham to move the runners to second and third, and the second was a flyout to right field on the first pitch to Padres catcher, Austin Nola.

What followed were scenes of jubilation at Citizens Bank Park not seen in more than a decade. Celebrations will go well into the night in Philadelphia and the surrounding areas, as the team is one series win away from its first championship since 2008.

The Phils go on to the World Series, and will face either the Houston Astros or New York Yankees from the American League. The Astros could clinch their second-straight World Series trip tonight by completing a four-game sweep of the Yankees.

Regardless of who it is, the World Series will begin next Friday, Oct. 29 with the Phillies on the road for Games 1 and 2. Games 3 and 4 will be at Citizens Bank Park.

As the sixth and final seed in the National League, the Phillies had on paper the toughest route to the World Series of any team. They had to go on the road in the Wild Card Round and beat the St. Louis Cardinals — which they did in a two-game sweep — before going to Atlanta and beating the 101-win Braves in a five-game series. The team closed that out last weekend in Philadelphia, setting up the seven-game series with the Padres.

They only needed five games against San Diego to book their ticket to the Fall Classic.