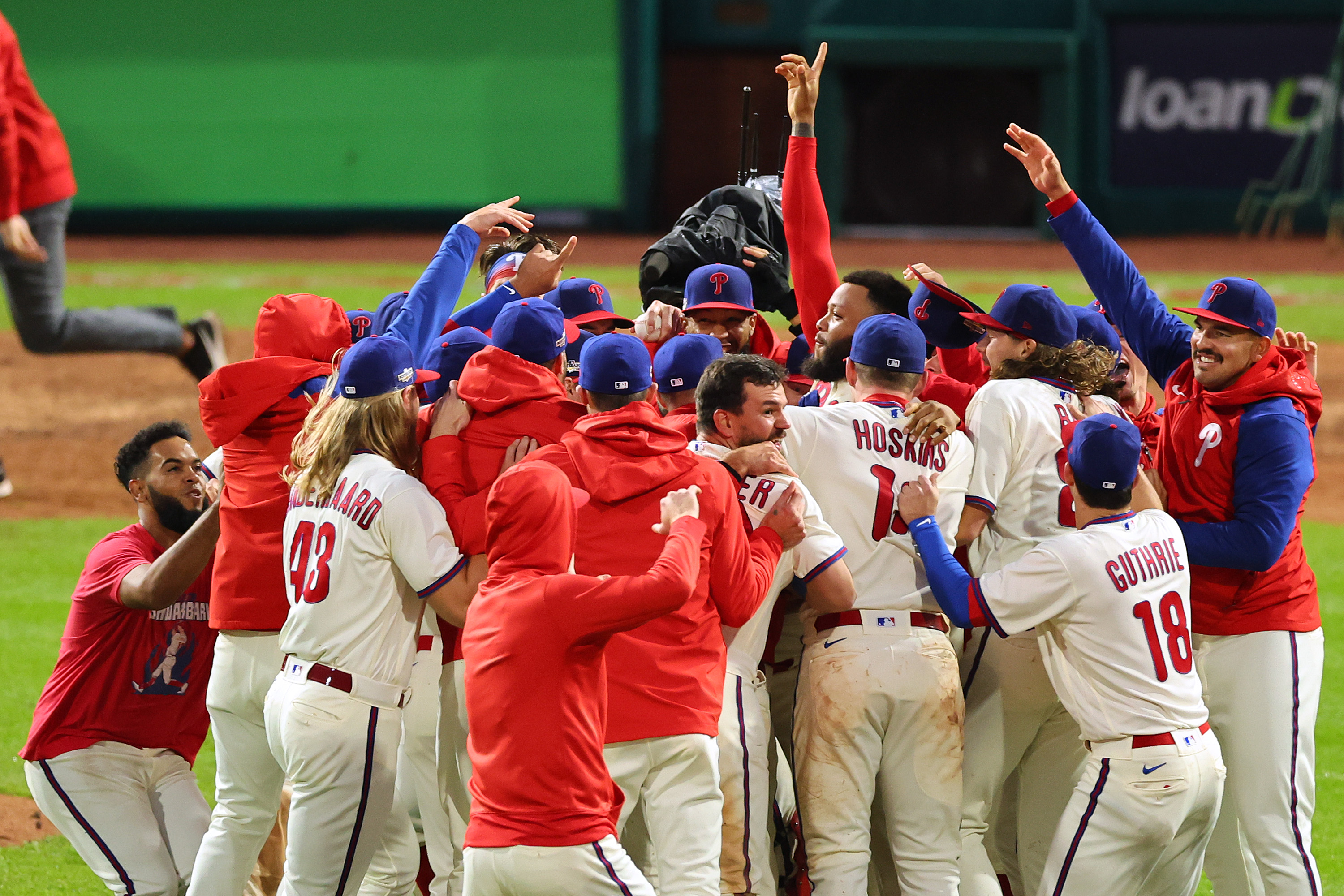 Members of the Philadelphia Phillies celebrate after defeating the San Diego Padres in Game 5 to win the National League Championship Series at Citizens Bank Park on Oct. 23, 2022 in Philadelphia. Photo: Michael Reaves/Getty Images.

After more than a decade without making the playoffs, the Phillies are taking full advantage of this opportunity, and now need 4 more wins for a World Series.

The last time the Philadelphia Phillies were in the MLB Playoffs, Barack Obama was barely halfway through his first term as president.

Since then, three presidential elections have taken place, there have been two new presidents and the sports landscape — MLB, included — has changed drastically.

The Phillies began their 2022 playoff run with the odds stacked against them.

It wasn’t until the final day of the MLB regular season that the Phillies officially clinched their spot as a wild card team.

From there, they went to St. Louis, and swept the Cardinals in the wild card round to advance to the NLDS.

Facing the 101-win and defending World Series champion Atlanta Braves was a tall order — a challenge in which the Phillies were more than prepared for.

After splitting the first two games in Atlanta, the Phillies came to Philadelphia for their first playoff game in over a decade. In front of their home fans at Citizens Bank Park, the Phillies scored a total of 17 runs in Games 3 and 4 of the NLDS to win the series 3-1 and set up the NLCS series against the San Diego Padres.

The 2022 NLCS marked the first time in MLB history that two teams that with fewer than 90 wins met in the National League Championship series.

Again starting the series on the road, the Phillies went into San Diego and split the first two games. With the series tied 1-1, the Phillies entered Game 3 in the first of three straight games at Citizens Bank Park, with the chance to clinch the series in front of their home fans.

The Phillies did just that, eliminating the Padres 4-1 to punch their ticket to the 2022 World Series.

While their 9-2 playoff record — including 5-0 at home — is nothing to sneeze at, their improbable run to the Fall Classic was not without its challenges.

The Phillies started the season with a 22-29 record, leading the team to fire its former manager Joe Girardi on June 3, 2022, replacing him with Rob Thomson in an interim role.

While he had been part of the Phillies’ coaching staff since 2018, Thomson had no prior experience in a managerial role.

The Phillies responded to the managerial change by winning their first eight games with Thomson at the helm, and finished the regular season with a 65-46 record with Thomson to punch their ticket to the postseason. After winning the wild card series, the Phillies removed the “interim” tag from Thomson role, and rewarded him with a two-year contract.

The path to the postseason wasn’t without further challenges, however, beyond the midseason managerial change.

While it is a total team effort, the Phillies’ trip to the World Series can be traced back to a key free agent signing.

In 2019, star slugger Bryce Harper signed with the Phillies on a 13-year, $330 million contract, which at the time was the richest contract in MLB history.

After what was then an eight-year playoff drought, the Phillies’ signing of Harper from the Washington Nationals marked the first of a series of roster moves that would lead to an eventual postseason run.

After winning his second NL MVP in 2021, Harper entered this season with high expectations. Shortly after the managerial change, Harper suffered two separate injuries that impeded his ability to play for several weeks each.

With key contributions from the likes of Rhys Hoskins and Jean Segura, major free agent signings in Kyle Schwarber and Nick Castellanos, and the steady pitching hands of the likes of Aaron Nola and Zack Wheeler, among several others, the Phillies managed to put the puzzle pieces together.

But Harper became the man of the hour, as it was his heroics — a go-ahead homer in the 8th inning of Game 5 — that helped clutch the National League Pennant and catapulted the Phillies to this year’s Fall Classic series.

While Harper was named the 2022 NLCS MVP for his troubles, he made sure to maintain his stance that the job isn’t yet finished.

“This is great, to be able to be the last National League team standing right now,” he said. “The Philadelphia Phillies, we're here. We're ready to go in that next round. We've got four more. We're going to enjoy this as a team, as a group, but we've got four more.”

The 2022 World Series will begin Friday, October 28 at Minute Maid Park against the Houston Astros.

As the Phillies have had to do all postseason long, they will have to start the series on the road. With a 4-2 road record during this postseason, they’ve shown an ability to win in front of opposing crowds.

They’ll need to do it at least one more time to bring home the World Series trophy and close the deal.