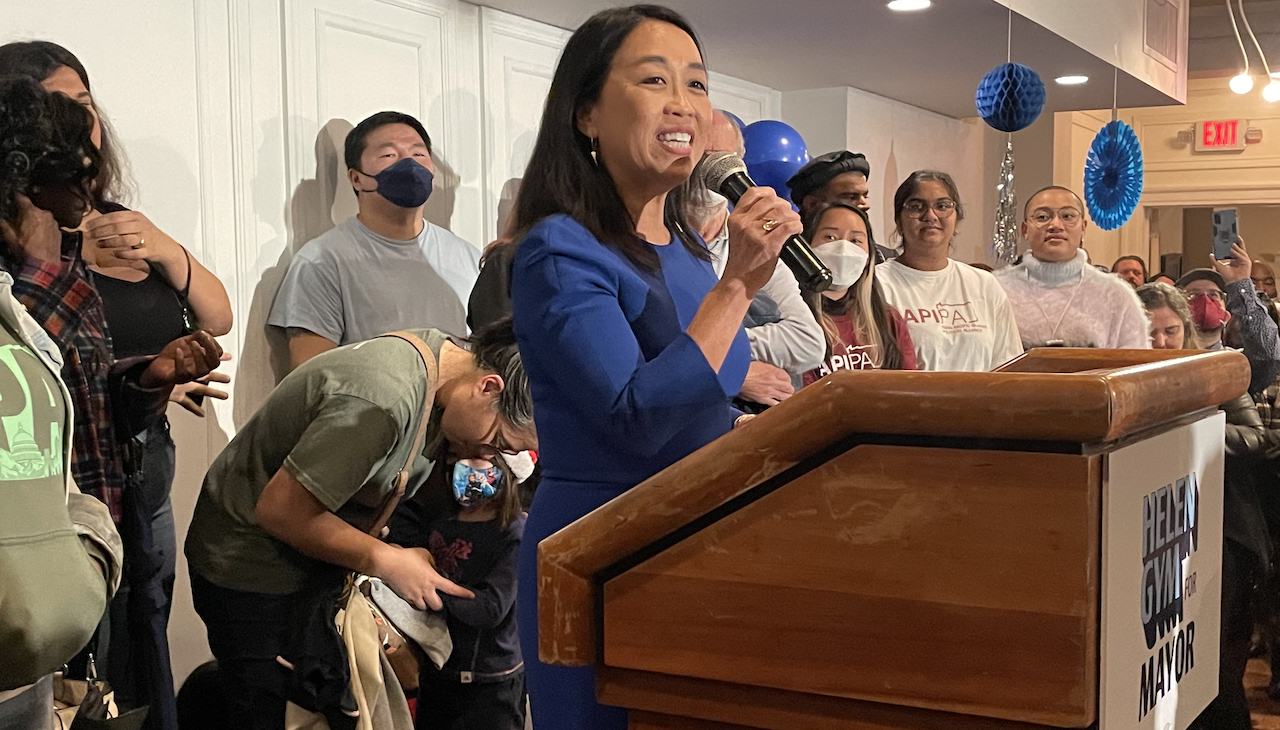 Helen Gym is the latest member of Philadelphia City Council to announce a run for Mayor. It came a day after she resigned. Photo: Carlos Nogueras/AL DÍA News.

Helen Gym will run for mayor of Philadelphia

Gym, a former at-Large councilwoman, announced her mayoral bid one day after her resignation from Philly City Council.

Editor's note: A previous version of this article mentioned Ms. Gym's proposal for community safety is pending. In her announcement, she outlined a preliminary proposal to address gun violence, and this article has been updated to reflect it.

The crowd roared on the second floor of William Way LGBT Community Center's ballroom, where Helen Gym unveiled her campaign for mayor just a day after she tendered her resignation from city council in a video announcement.

Lively music, a press riser, a complementary food table, and staffers sporting shirts that read “Helen Gym: Fighting for you” was the environment the rising nominee created for her official bid.

“I'm standing here today for the same reason I became a teacher: to build a better Philadelphia,” Gym said during her remarks.

Gym is the latest Democrat in a crowded field of seven to throw her hat into the ring and the fifth member of city council. The Philadelphia Home Charter directs councilmembers to resign before pursuing other elected offices.

Although Gym, a former public school teacher, is newer in the political fray in comparison to some of her former colleagues in council, that didn’t deter her from spearheading successful legislation that others deemed undoable.

“When I listened to so many people with the power, titles, and money to make a difference, a lot of times, you didn't hear any answers from them,” Gym said in an interview with AL DÍA News.

“But I never felt that when I was in communities. I only saw purpose and hope and action."

Her local lawmaking legacy includes an eviction diversion program that requires landlords to mediate with trained housing counselors and apply for rent assistance before resorting to vacating a unit.

Its success in Philly drew praise from the White House, and it was held as a model for addressing lasting eviction prevention reform by the federal government. In October, the pandemic-inspired program secured an 18-month extension.

But her progressive spirit was felt in City Hall in other ways.

In the Summer, Gym was one of few dissenting voices in a city proposal to cut taxes for businesses and corporations led by a group of centrists, according to reporting by the Philadelphia Inquirer.

We were, “just teachers. Just moms,” Gym, who spoke directly to her progressive colleague, councilwoman Kendra Brooks, recalled of the disagreeable nature toward progressive officials in council.

And years before she became a city official, she was part of a demonstration against the proposal to build a stadium near Chinatown, a project that never materialized.

In the wake of a new stadium proposal in the summer of 2022, she told the Inquirer that Philadelphians have “seen this before” and said she would not support development that didn’t benefit the communities it would inevitably impact.

Another platform where Gym’s policy view may be tested is gun reform, and similar to Quiñones Sánchez, she has echoed the presence of poverty as one of the chief drivers for gun violence.

"While many people will talk about public safety in this race, let me be clear. Decades of systemic racism and disinvestment have brought us to this place. When I deliver a real anti-violence agenda, I will deliver a real anti-poverty agenda and a promise for economic opportunity and livability for all Philadelphians," Gym underlined in her delivery.

In an interview with AL DÍA, she remarked on the “calvary of public services” to strengthen community safety, in repurposing the government to work for the people and curb the “scourge of gun violence,” and outlined a preliminary strategy in her mayoral reveal, starting with 57 of the most affected blocks in Philly where she plans to intervene by convening "the District Attorney, the heads of the School District, SEPTA, PHA, and state and federal law enforcement as well."

"This is an all hands on deck moment where every good idea is turned into action and where we ensure coordination across all agencies."

On day one, Gym said, she'll declare a state of emergency - one of few candidates who explicitly expressed they would do so - and would "prioritize improving the clearance rate on homicides because every death in the city is someone who matters. I will reduce 911 response times. When our people call for help, they must know help is on the way," her speech read.

Responding to the kind of plan she would bring to Harrisburg to propose public safety solutions, Gym said she’s never “believed the solutions start in Harrisburg or Washington,” and that she wants to bring that fight from Philadelphia.