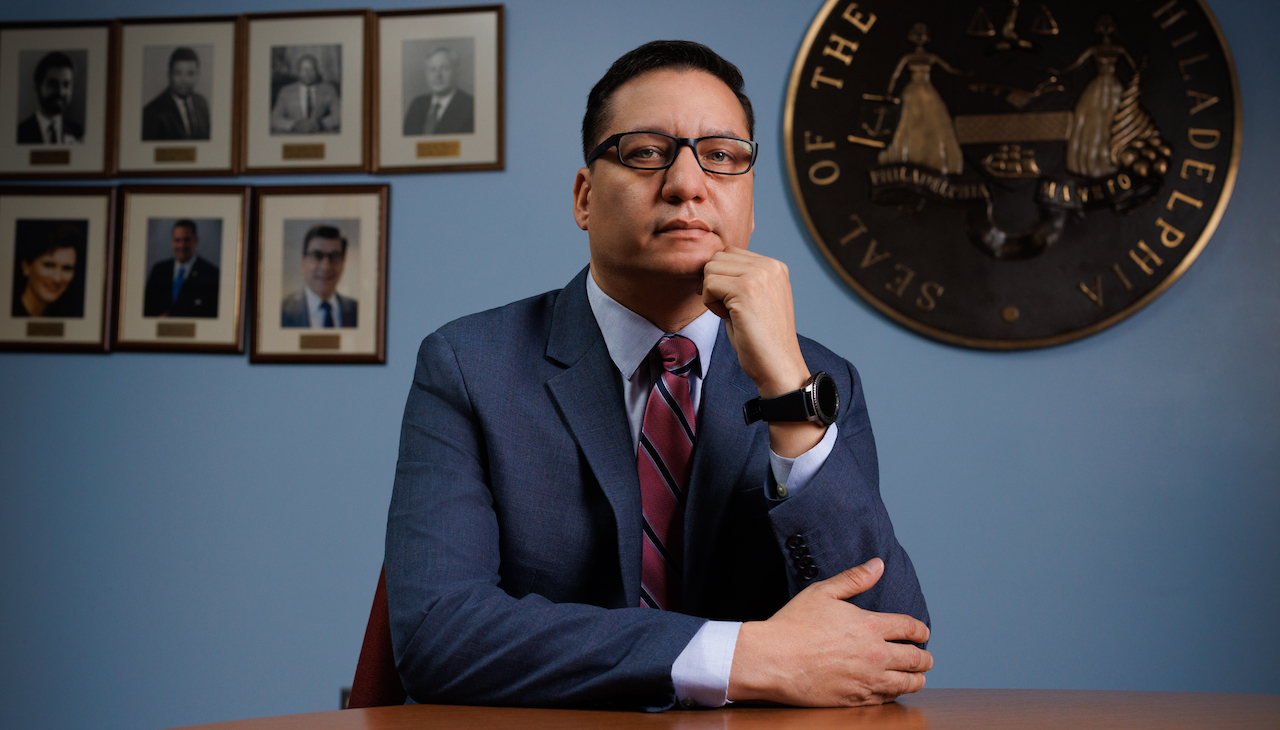 The newest addition to the Managing Director's office has spent his life serving his Philly community.

Never in a million years did Orlando Rendon think he would work in city government.

“I would have sworn I would have died as a nonprofit head and just being grassroots at that level, extremely small scale,” said Rendon in a recent interview with AL DÍA News.

At the time, he was chief operating officer of ASPIRA, a longtime Latino-centered education nonprofit based in North Philadelphia. In his 26 years there, from student to leader, Rendon saw the organization empowering Latino students grow from an entity with a little over $1 million in funding explode into a $65 or $70 million operation.

It wasn’t small, but the nonprofit, like any business in the whole of Philadelphia, was still beholden to the decisions made in city government.

When Rendon was offered his first city government post as Deputy Commissioner of Programs in Philadelphia’s Parks and Recreation Department, he turned it down. That is, until he was posed a question that would change his life.

“Do you want to be a thermostat or thermometer?” he was asked by an older gentleman during the recruitment process.

It confused Rendon at first, but as it was explained, the message of differing impacts became clear.

“If you're a thermometer, you're just taking the temperature of the room. You're making things real, but whatever is happening it's already controlled, you're just working with it,” he said. “You have an opportunity to be a thermostat. You can change, engage in terms of what's happening around you — make it cooler, make it hotter.”

Making an impact has always been at the forefront of Rendon’s mind, even as a kid growing up in North Philadelphia.

He was Brooklyn born, but moved to 5th and Dauphin with his family when he was five years-old.

Growing up, Rendon said he and his siblings couldn’t enjoy the neighborhood they grew up in because of the crime and drugs. Through to when he hit high school in the early 90s was the height of the drug wars in Philadelphia, and crack cocaine was the number one seller on the city’s corners.

“It was extremely difficult,” said Rendon.

In the face of that difficulty, his family was resilient. Rendon’s parents were extremely civically engaged — his father was a police officer, and his mother pitched into the community as a part-time educator. They also volunteered at a number of organizations fighting the crime wave in the community.

As part of one, United Neighbors Against Drugs, Rendon’s mother would sit on a corner in the neighborhood with a hard hat at night and drive away the dealers.

“Give till it hurts,” was one of the many philosophies he said he took away from his parents’ civic engagement.

They also emphasized the importance of getting an education as a way out of their situation.

Rendon attended Central High School before going on to Temple University and graduating. It was at the former, where he first encountered ASPIRA.

Then, a small organization in North Philly focused on bringing some Latino cultural programming to neighborhood schools, ASPIRA’s mission struck a chord with Rendon. At Central, he was one of the few Latino students in the entire school.

“We want to make sure that your voices are heard, that you don't get lost, that it is important in terms of what you want and what you believe in,” said Rendon of their message.

He joined up shortly after meeting the group, and was appointed a delegate to the organization’s Union of Students to start. Rendon stayed in touch following his graduation from high school and would go on to help run community improvement programs called Next Up centers. When he graduated college, Rendon grew within ASPIRA teach life skills to kids after hours at local high schools, and went on to do a whole lot more over the next 26 years.

In that time, he also saw the organization hit a major growth spurt, going beyond the individual classroom education strategy, and wanting to create education spaces that were all their own.

“Let's be the educators and make that difference and the impact ourselves,” said Rendon of the changing mission.

Funding-wise, the organization’s pool went from $1.8 million to $70 million in less than five years as its staff also grew from 12 to around 700.

“It was baptism by Inferno, not even fire. But the passion that our folks had to make this work, it was just 24 hours-a-day nonstop to ensure what we were doing,” said Rendon. “We knew it was for the right reason, but we had to be sure we had it right.”

It is off the back of that experience of growing with an organization like ASPIRA, when Rendon was asked to make the transition to Parks and Rec at the city level.

When he finally joined after some initial resistance, Rendon was Deputy Commissioner of Programs. The position had him oversee more than 150 recreation centers, swimming pools, older adult centers, ice-skating rinks, and environmental centers throughout Philadelphia.

Rendon said the early days at the city were difficult, given his unfamiliarity with processes and at an agency he didn’t know, but credits his team with understanding and allowing him to grow into his role.

He also gave credit to the many people he met running rec centers across the city. In Rendon’s mind, they were community centers, and the leaders in charge of them he called community CEOs. Very much like his experience at ASPIRA, these leaders operated far outside their job descriptions on limited budgets, and still got the job done.

“It wasn't about the struggle, it was like: 'How are we going to overcome it?'” said Rendon.

That struggle waned no more than amid the early days of the COVID-19 pandemic in the city. As the city shut down, community centers became places of hope, where food and other basic need drives were held.

Even before COVID, Rendon managed the largest out-of-school time food service program in the city, delivering meals to more than 2 million kids. He also oversaw the city’s Summer Work Ready program, which has provided work opportunities to upwards of 1,300 youth between 14 and 18.

After six years in his role, Rendon was offered his current new position of Deputy Managing Director for Community Services to replace the outgoing Joanna Otero-Cruz.

In reflecting on Otero-Cruz’s departure, Rendon cited their good relationship, and her constant support of his efforts at Parks and Rec.

“She was such a great individual, and a great partner,” he said.

When first hearing his name was in the running to be her replacement, Rendon admitted he was shocked because he had only been at the city for six years. On the flipside, he was also grateful because it meant people were noticing the work he put in.

A recognition of work

He was officially given his promotion on Feb. 7, 2022. With it, Rendon inherited a portfolio that includes city agencies that include the Office of Immigrant Affairs, 311, the Community Life Improvement Program (CLIP), Mural Arts Philadelphia, PHLCity ID, Philly Counts, and the Animal Care and Control Team of Philadelphia (ACCT Philly).

Goal number one beyond getting acclimated with the workflow, Rendon said it’s important for all his programs to get back to as close to operating at full capacity as possible.

“They were not exempt that every city department had to go through during cuts,” he said. “Our folks are stretched, they're doing the work, but we don't want people to burn out.”

Beyond that, Rendon emphasized the need to continue marketing and spreading the word about the services that are available to residents in the city.

Under his purview are also some of the most scrutinized programs in the city, like 311. Regarding the much-maligned city hotline, Rendon offered his support to the team running the effort, and cited its rising success rate as a sign of progress for the still relatively young effort.

When confronting the criticism, Rendon said the important thing to be is transparent.

“You let people know exactly where you are, and where you stand, and what obstacles and challenges that you face as a city,” he said.

Of the team carrying out the work, Rendon said they very much come from the same cut of cloth as himself.

“I see, in terms of what I was instilled with, our folks really give till it hurts, they don't stop,” said Rendon.