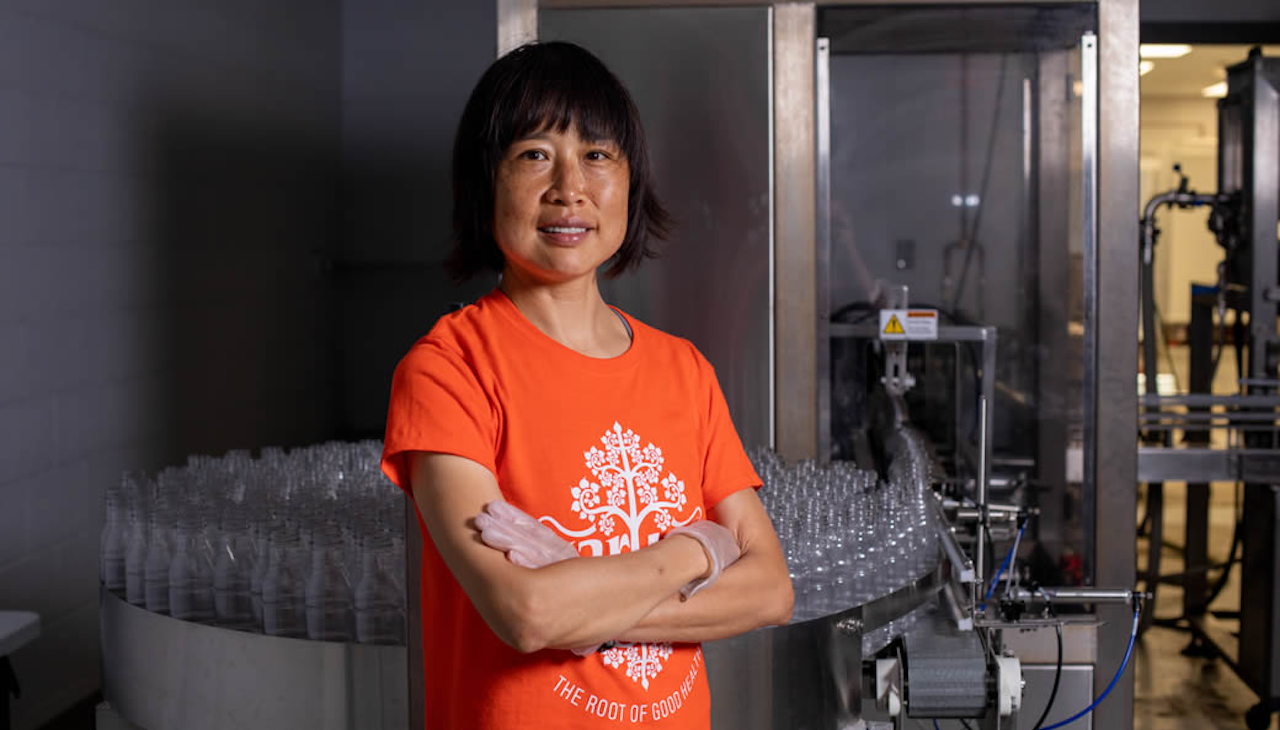 The St. Louis-based healthy drink company influenced by Ancient Chinese medicine has been a boom in the Midwest.

In the Western world, consuming “junk food” throughout the day and skipping out on fruits and vegetables has become very common. While the negative health effects that come from these habits may not be immediately apparent, the long-term impacts can be serious.

Dr. Angela Zeng, originally from Shenzhen, China, wanted to change that, so she used her knowledge of Eastern medicine to create the healthy beverage company Karuna.

In an interview with AL DÍA, Zeng shared a little about her background in medicine. While in China, she studied biochemistry, and when she came to the states in the late 90s, she received a doctorate degree in pathology.

But Zeng had fallen in love with traditional herbal Chinese medicine at an early age, and through Karuna, she was able to share that love with the world.

Zeng didn’t always know that she would end up becoming a CEO of a wellness brand, especially since she is older than most individuals who launch a company.

Congrats to Angela Z., parent and mastermind behind superfood Karuna drinks for her ingenuity and hard workhttps://t.co/Fr6ltUr1wm pic.twitter.com/ojLMizvciq

“It is super risky, especially for someone at my age. I’m not a young person who just graduated from college. When I decided to start this business, I was already in my 40s and now I’m heading to 50. People at this age don’t really think about starting a business, but for me it is really in the core of my family,” Zeng said.

Zeng’s dad started his own consulting business prior to retirement, and he was very successful. When Zeng was studying biochemistry in Shanghai, she ran a small campus flower shop on the side.

So although Zeng never imagined this exact future for herself, running some kind of business has always been in the back of her mind. For Zeng, the motivating factors are two-fold: the medical research she’s done over the years, and the need for a healthy drink alternative in the U.S.

In the states, the medical industry typically doesn’t focus on prevention, instead tackling symptoms of an illness or disease that developed over time. In many Eastern countries however, health and wellness is viewed more holistically, with an emphasis on prevention.

Panama approves marijuana for medicinal and therapeutic use
September 1st, 2022
Thoughts and feelings behind the 2022 AL DÍA 40 Under Forty event
August 30th, 2022
Jorge Plasencia, a new member of PBS Board of Directors
July 15th, 2022

Was great to meet with Karuna Founder & @BuyMissouri member, Angela Zeng today. As one of our #WomensHistoryMonth  features, she is making a big impact by educating & resetting expectations regarding health & wellness, one person, one beverage, at a time. https://t.co/dYxfJZQUcD pic.twitter.com/5Uui14At5k

“Obviously, we could treat people better. We could diagnose people earlier. What we’re putting in our body has an impact on us beyond what people think about, like ‘oh it’s going to make me gain weight, or feel tired,’ it’s beyond that. Many consequences can happen at such a low level that we don’t realize at first, but we discover it a little too late and we have to rely on many medical products to reverse it, which is not ideal,” Zeng said.

Zeng knew that with her background in biochemistry, pathology and ancient wisdom, she could come up with very unique formulas that would help people lead healthier lives.

When she first started discussing her idea with health food industry leaders, she was told that St. Louis, Missouri was the wrong place to launch a healthy drink, and that the “Midwest doesn’t care about health.”

But Zeng refused to believe that people in the region only cared about “eating ribs and drinking beer.” So she created the formulas and launched Karuna in 2016.

In just one year, Zeng developed eight different drinks to make up the core of Karuna’s product line. She combined ingredients such as turmeric, which is famous for reducing inflammation, flaxseed, which assists in digestion, quinoa, and mung bean sprouts.

Four years later, Karuna is a top seller on Amazon and in St. Louis supermarkets like Dierbergs and Whole Foods. Karuna is also working on developing a product line that will be sold in China.

The word Karuna means compassion in Sanskrit, and it comes from one of the four foundations of Buddhism. So Karuna’s mission is all about compassion for life.

“Our mission is to empower people to reconnect with Mother Nature so they can make better choices about what they put in their body, which can have a dramatic impact on their physical and mental wellbeing. When we move away from our connection with nature and we start synthesizing food, the body doesn’t like that,” Zeng said.