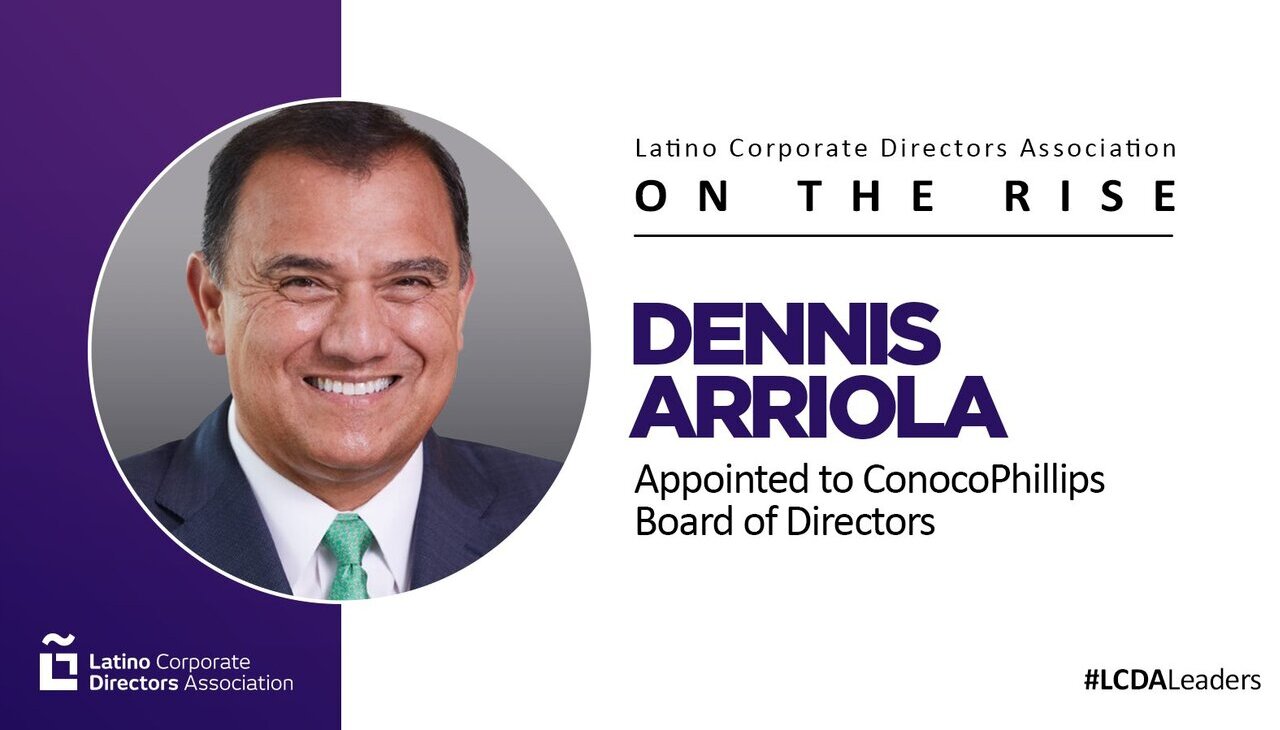 Arriola is a member of the Latino Corporate Directors Association (LCDA). Photo: @LatinoDirectors.

The Latino executive has extensive experience in the energy sector.

One of the world's leading exploration and production companies, based on both production and reserves, recently announced the appointment of this renowned CEO as a new member of its board of directors.

We are pleased to add Dennis to the ConocoPhillips Board of Directors.

Arriola, who will serve on the Human Resources and Compensation Committee and the Audit and Finance Committee of the ConocoPhillips board, has more than 28 years of experience in the energy sector, where he has been particularly noted for his approach to renewable energies.

His most recent roles include CEO of Avangrid, Inc., and Executive Vice President, Group President and Chief Sustainability Officer at Sempra Energy.

“Dennis brings valuable perspective and expertise in the energy sector, particularly in renewables and low carbon energy. We look forward to his contributions as we deliver on our Triple Mandate of meeting energy transition pathway demand, generating competitive returns on and of capital, and achieving our net-zero emissions ambition,” added Lance.

Arriola has also been named to the boards of Avangrid, Inc., the California Latino Economic Institute, the U.S. Chamber of Commerce, the California Business Roundtable, the Edison Electrical Institute, and the boards of several Sempra operating companies, including Infraestructura Energética Nova, a publicly traded company in Mexico, Luz del Sur SAA, a publicly traded company in Peru, and Chilquinta Energía in Chile.

With the appointment of Arriola, who has a BA in Arts and Economics from Stanford University, and an MBA from Harvard University, the number of directors at ConocoPhillips increases to 14, out of which 12 are independent.

“I’m honored and excited to join the #ConocoPhillips Board of Directors. As a Fortune 100 company, ConocoPhillips is a global energy leader working to address the needs of our transitioning world. Under the leadership of Chairman and CEO Ryan Lance and the stewardship of the Board, ConocoPhillips is focused on achieving its operational net-zero emissions ambition while meeting transition pathway demand. I look forward to staying engaged in the energy transition and providing my support to ConocoPhillips,” underscore Arriola through his LinkedIn profile.

Headquartered in Houston, Texas, ConocoPhillips has operations and activities in 13 countries, as well as $94 billion of total assets and approximately 9,400 employees as of June 30, 2022.