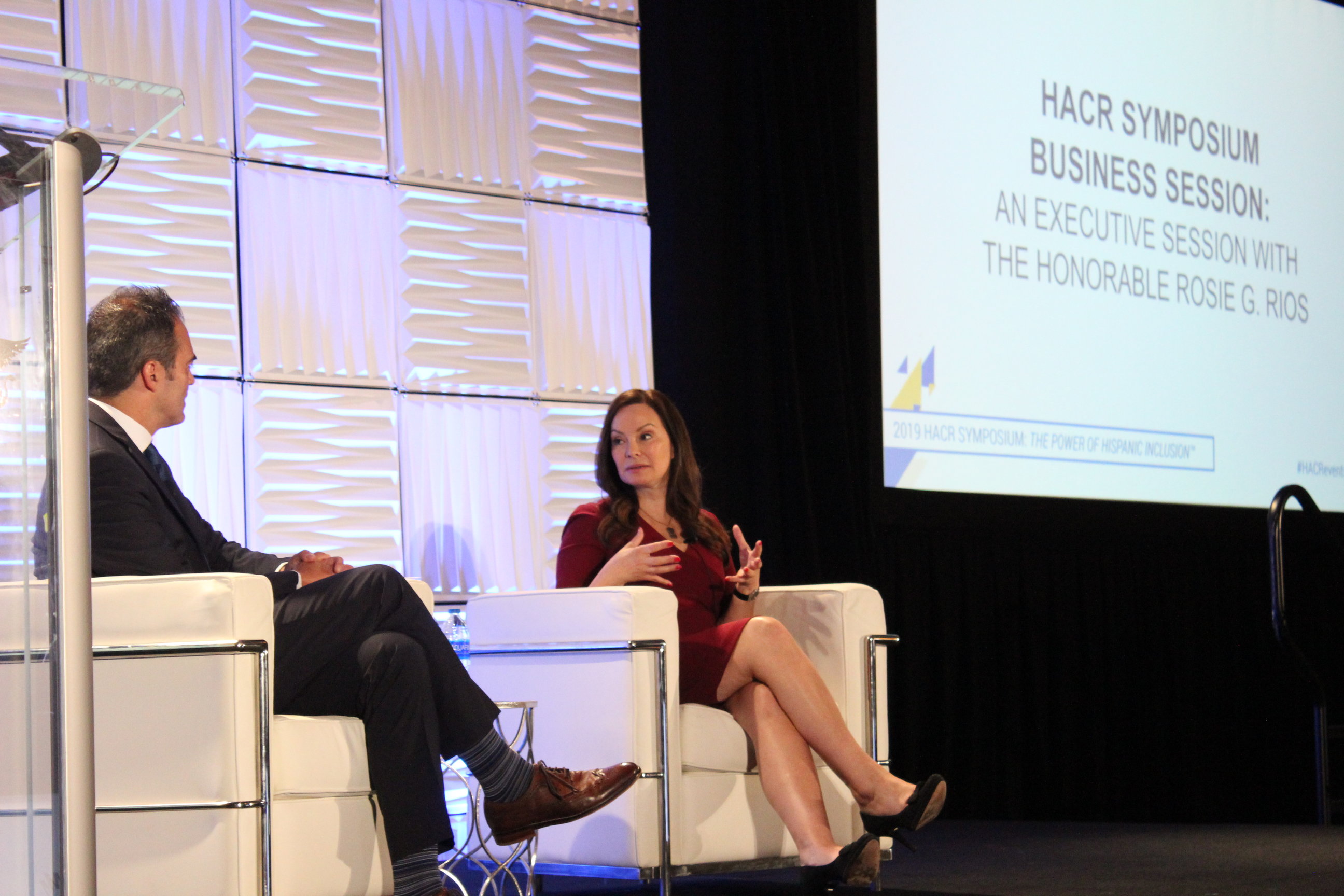 The Honorable Rosie G. Rios discussed efforts to further the successes of women as one of the speakers at the HACR Symposium.

The 43rd Treasurer of the United States is best known for her efforts to redesign U.S. paper currency to add the first woman. Among the finalists: Harriet Tubman.

“You know when I was in the Treasury department I realized something. The reason why women have never appeared on currency is seemingly because no one had ever brought it up,” Rios said.

In April 2016, it was announced that historic women, including Tubman, would be placed on the $5, $10 and $20 bills. The new design was scheduled to be unveiled in 2020, celebrating the 100th anniversary of the 14th amendment, which granted women the right to vote.

Under President Donald Trump, however, the project has been put on hold.

Rios, who was appointed by President Barack Obama in 2009, spoke at the Hispanic Association on Corporate Responsibility Symposium about her career in the White House and how to increase Latinx representation within the political world.

“For me, when you get that call you can’t really say no,” said Rios, who is currently a Visiting Scholar at the Radcliffe Institute for Advanced Study at Harvard University.

Rios spent almost seven years as the Treasurer of the United States, longer than many before her. In addition to spearheading currency redesign, Rios implemented a nursing room in the Treasury department for mothers and chances are that if you pull out a bill, her signature will be on it.

In her talk at HACR held this week at the J.W. Marriott Marquis in downtown Miami, Rios noted that her signature is on $1.69 trillion of the $1.7 trillion of U.S. currency in circulation.

Rios also took pride in being a Latina woman in government. She was the sixth Latina to hold the post, before stepping down in July 2016.

Rios told the audience that she grew up around a diverse group of individuals in California but didn’t see that diversity at Harvard University, her alma mater, and the White House. That is why her efforts, she said, continues to be advancing the status of women and specifically Latina women.

Rios launched EMPOWERMENT 2020, a movement that focuses on the physical recognition of historic American women and provides a collective voice advocating for women in senior leadership positions and investment programs for both women and girls, at Harvard. Its first project, Teachers Righting History, www.teachersrightinghistory.org, began as a pilot program last August 26, Equality Day, to recognize historic American women in classrooms across the country.

Rosa reiterated the importance of using leadership for good.

“The question I always ask myself is how can we make a difference as Latinas. I don’t do this for a living but I live to do this.”