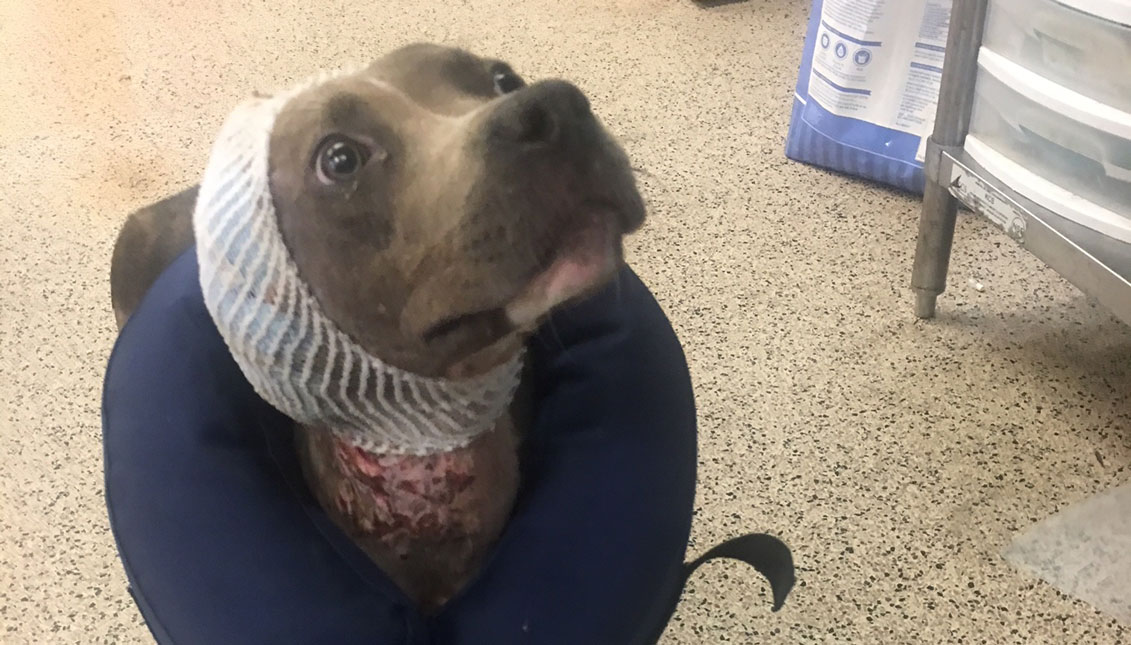 A female dog, nicknamed "Brownie," was found with open wounds and covered in maggots. (PSPCA)

The Pennsylvania SPCA is asking for the public’s help in gathering any information about an injured dog, who was found on June 20.

A brown, female pitbull-type dog was found with open wounds, seemingly left to die in North Philadelphia on June 20, and the Pennsylvania Society for the Prevention of Cruelty to Animals (PSPCA) is seeking the public’s help in collecting any information about the dog, the owner or her abandonment.

Animal Care and Control picked up the dog, nicknamed “Brownie,” who had been discarded with open wounds and found covered in maggots in a fitted sheet in the north part of the city. She was transferred to PSPCA Shelter Hospital to receive immediate medical treatment as the multiple wounds had become infected and areas of Brownie’s skin were dying. The organization suspects that she suffered animal cruelty.

PSPCA Shelter Hospital Veterinarian Dr. JoEllen Bruinooge said that Brownie required a blood transfusion, antibiotics, pain control, an IV for fluids and surgery to remove an ear and a large portion of dead skin on her head in order to survive. Dr. Bruinooge said Brownie has a “sweet demeanor” and was resilient, fighting to survive as her body shut down from the infected wounds.

The PSPCA is now asking anyone who recognizes Brownie to contact the organization.

“While there are many things we don’t yet know about Brownie’s story and how she ended up abandoned and left to die on the streets of Philadelphia, we do know there is someone out there who recognizes Brownie,” PSPCA Director of Humane Law Enforcement Nicole Wilson said in a statement. “We are asking those individuals to do the right thing and come forward to uncover what happened, who did this and bring them to justice.”

Those with any information on the case are encouraged to contact the PSPCA by calling its hotline, 866-601-SPCA, where tips can be made anonymously. The public can also donate to support Brownie’s care here.