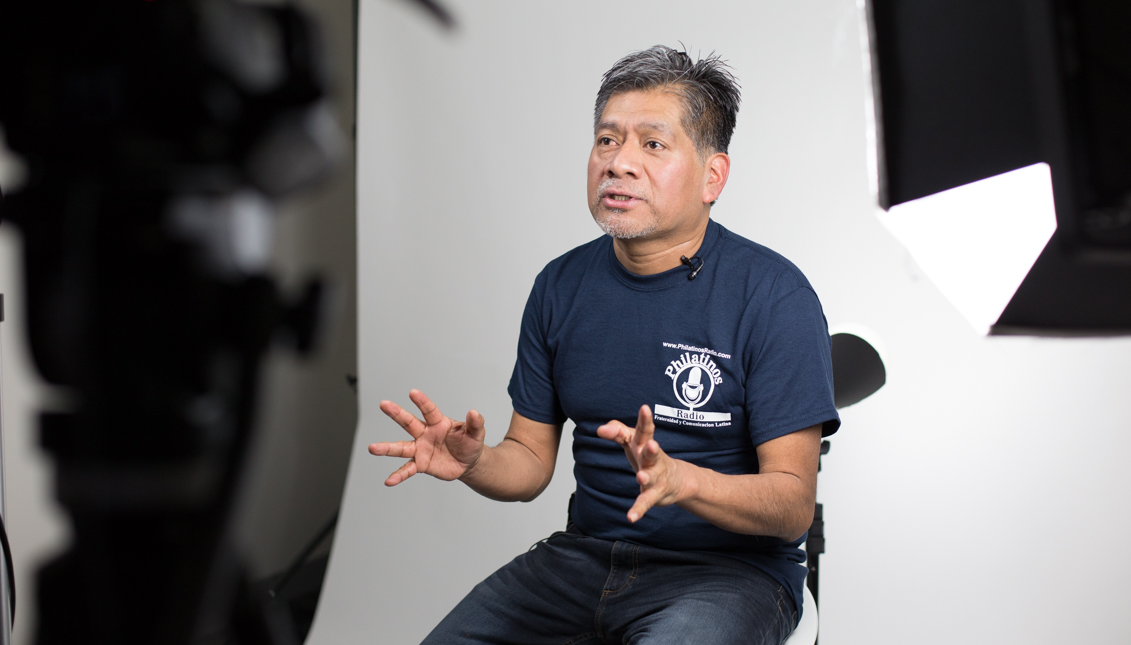 Édgar Ramírez is one of the founders and hosts of the Mexican community radio station based in South Philadelphia. Photo: Samantha Laub / AL DÍA News.

Édgar Ramírez: The voice of Philatinos Radio in South Philly

Édgar is one of the founders and host of the Mexican community radio station based in South Philadelphia.

The first time I talked to Édgar Ramírez was exactly a year ago. I had just arrived in Philadelphia and the first thing I did was look for a neighborhood or a community that spoke my language: Spanish, “the motherland” that reaches over 20 countries and turned a thousand years old not long ago, as Colombian writer Fernando Vallejo once said.

Somebody passed me Édgar’s phone number; they had suggested I talk to him. I was looking for stories to tell and once I stepped in that local on 9th and Washington (the heart of the Italian Market), I found an authentic storyteller.

Édgar was hosting his show on Philatinos Radio, the digital radio station he founded five years ago. By the end of the day, we were engaged in a long conversation.

Listen to "Philatinos Radio" on Spreaker.

In a matter of minutes, I figured out that I was speaking with one of those colorful characters that every community has: the non-official historian, the chronicler that hasn’t written his first piece, the smartass, the guy who knows the most curious things, the source of knowledge about the Mexican community in South Philly.

He was there and ready to help me find what I was looking for.

Édgar came to Philadelphia in 2006 after spending two years in New York City. Here, he worked in a restaurant until he got fed up with wasting his time doing things he didn’t enjoy. Since then, in his own words, he does “whatever to not work.”

And not working, Édgar does a lot.

Originally from Santa Catalina Chinango, in the state of Oaxaca, Mexico, Édgar won his spot on the Carnaval of Puebla’s committee, one more on the board of Puentes de Salud, he collaborated during the foundation of Casa Monarca and Juntos, and then he founded Philatinos Radio, the community and digital radio station that has amplified the voices of hundreds in South Philly during the last five years.

Édgar is committed to his community and everybody knows him. Because of his work as a radio entrepreneur and the the non-official historian of the Mexican community, he is one of the twelve I Am An American Immigrant campaign finalists.

I think it was during the second year, after I fulfilled some commitments.

I quit everything that was stressing me out in order to relax and then I started to find out that I could do other things. I started to have new ideas, I took some classes about how to create businesses, I stopped encountering resistance from myself and other people.

I’m happy because I have made all my dreams come true, no matter if they’re big or little. What matters is that they have come true.

I am from the mixteca culture. Even though we have a geographic location, we’ve always been migrants; we have moved from town to town, on to the next city in order to get ahead.

When I came to the United States, I didn’t feel out of place because I have always worked for everything that I have; I don’t take or ask anything from anyone.

I love being an immigrant because, as I said, we come fresh, we bring energy to do different things.

What are the contributions immigrants make to this country?

Mexicans’ contribution is that, as newcomers, we want to work a lot. We contribute in basically every aspect: economy, workforce, entrepreneurship.

Sometimes, U.S. society thinks that we make a lot of money and that we send it all to Mexico. But let’s be realistic: we pay rent, we eat, we dress, we use public transportation… Our money also stays here, as well as our lives, our efforts, our contributions, our knowledge, our education…

We give everything of ourselves without thinking too much.

What would you say to Donald Trump if you had him in front of you?

Since I don’t speak English, I don’t know what I would say to him.

But, If I had an interpreter, I’d say that he has to read a lot about U.S. history. I thought that as a grown man he would be a wise man, but I think he’s not.

I’d tell him that he should leave the office of the presidency because he’s not meant to be there.

Obviously, he won’t leave it. The interpreter would probably end up saying: “He said you’re doing a good job!” But I’d say definitely not.