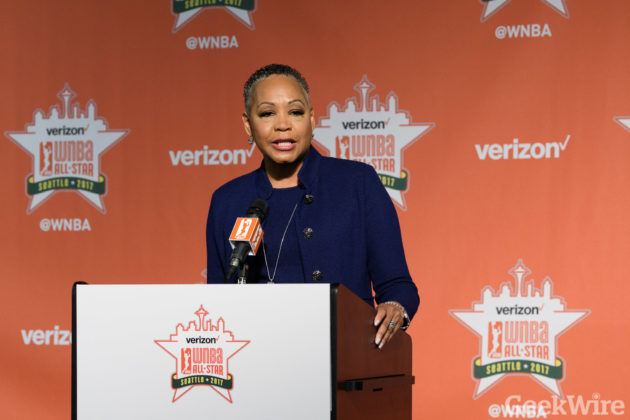 Lisa Borders is leaving her role as WNBA President to become the first-ever President & CEO of Time's Up. GeekWire photo/Kevin Lisota

Lisa Borders: A perfect choice to lead Time’s Up

During the three years Lisa Borders spent as President of the WNBA, the league saw tremendous growth and improvement. She can use that experience to create…

Time’s Up has made an excellent choice with their decision to name Lisa Borders as the organization's first President and CEO.

Since January, Time’s Up has advocated for safe, fair and dignified work for women, especially in light of the countless instances of sexual harassment that have occurred in the workplace over the years.

As the movement moves forward and grows from its initial start as an initiative without a distinguished leader to a full non-profit organization, few more qualified names than Borders could have been considered.

Borders has served as the President of the Women’s National Basketball Association (WNBA) over the past three seasons. Since taking over in 2016, the WNBA has expanded, increased exposure and made league improvements. For instance:

However, more importantly, this past season the WNBA saw its highest TV viewership ratings in four years. That means people are taking notice.

In an age when women are constantly fighting to gain equality and more respect in the workplace, Borders is well equipped to help lead Time’s Up considering the fact that her leadership raised the WNBA to new heights. She has a professional background in all three sectors—private, public, and non-profit—so we can expect the transition from the WNBA to Time’s Up will be smooth for Borders.

In addition to harassment, Time’s Up also addresses issues such as inequality and injustice in the workplace, as well as underrepresentation. While these are concerns women face in the workplace in general, they also apply to the WNBA. While the players' NBA counterparts play an 82-game, six-month-long regular season in a league that includes 30 teams, WNBA athletes play a shorter 34-game, four-month-long regular season with only 12 teams. NBA players receive about 50 percent of the league’s revenue, whereas WNBA players receive only about 20 percent of theirs.

While Borders wasn’t able to make improvements in those areas, she still did a ton of good throughout her time running the WNBA. As Time’s Up continues to grow and aims to improve the workplace environments that women are often exposed to, it's crucial for the organization to have a leader with a track record of making positive change. Lisa Borders has that record. The next President of the WNBA will be left with big shoes to fill, but will likely also be left with a league that is better now than it was three years ago before Borders took over.

Having Borders as the leader of Time’s Up is a win for both the movement and the organization. She’s advocated for women at the helm of a prominent women’s sports league and has the potential to help create real change for women everywhere. That’s what it’s all about.