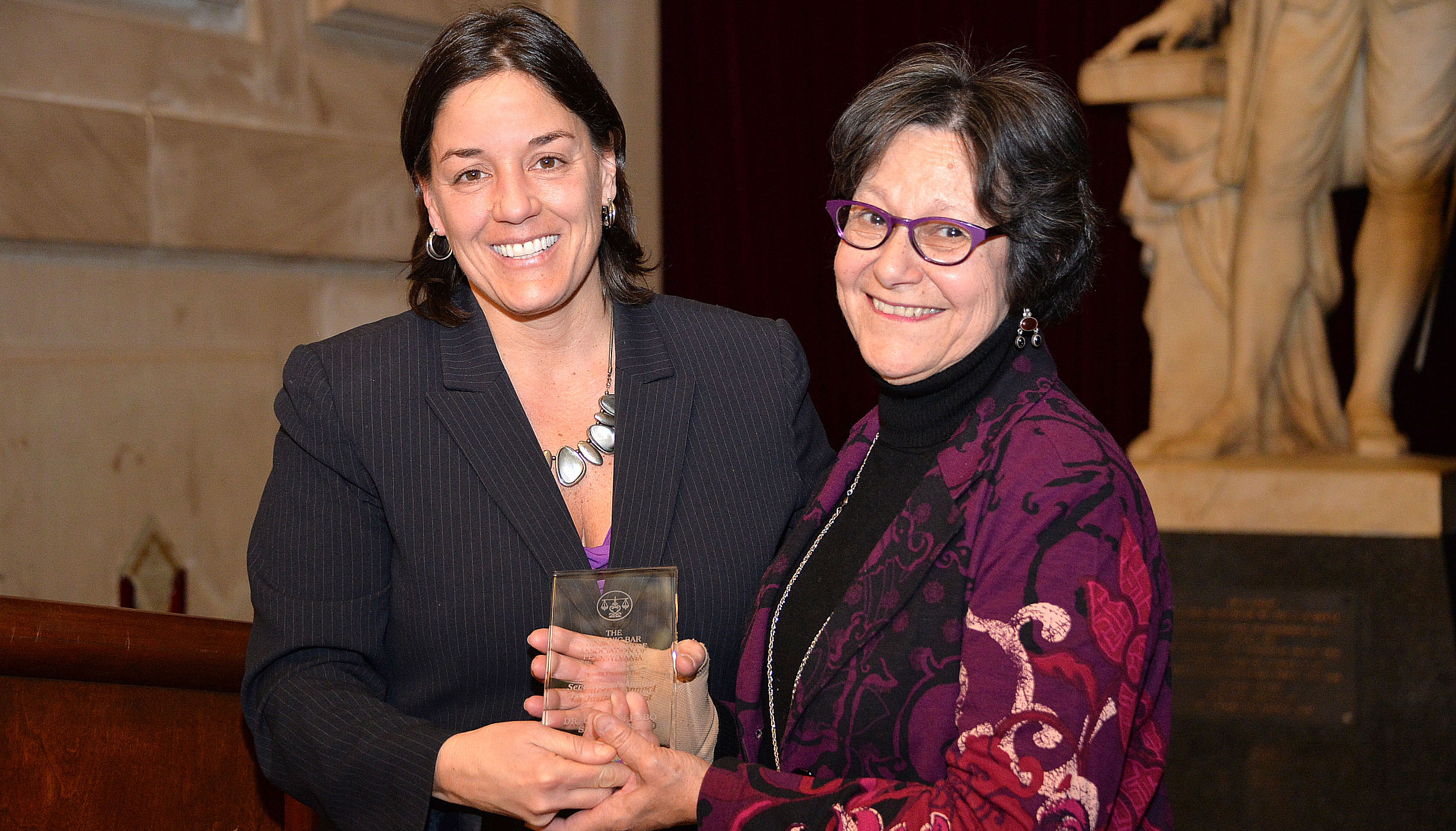 On January 30th, 2018, Dr. Carmen Febo-San Miguel was honored with the La Justicia Award, preceded by opening remarks by Mayor Jim Kenney and presented by the…

It's always a good day in The City of Brotherly Love when a woman is recognized for her outstanding work, especially when it is long overdue.
Dr. Carmen Febo-San Miguel has devoted nearly forty-five years of her life to helping and healing Philadelphia and Puerto Rico, and she is showing no signs of slowing down or backing away from the battle of defending her two homes.
Using activism, aid, alleviation, and the arts as her choice weapons of love, Febo-San Miguel has made a significant impact in both places.
As a family physician, as the Executive Director of Taller Puertorriqueño, and, most recently, as the named plaintiff in a recent Pennsylvania Supreme Court case that threw out Pennsylvania's maps due to gerrymandering, and as a two-time breast cancer survivor, she is indeed a force to be reckoned with.
Febo-San Miguel was presented with the La Justicia Award this past Tuesday, at a reception hosted by The Hispanic Bar Association of Pennsylvania and catered by Ted Torres. Conversation Hall was interspersed with members of bar associations, organizers from Taller Puertorriqueño and Unidos PA'PR, and friends of Febo-San Miguel.
Attendees were asked to contribute a suggested donation of $20 to Unidos PA'PR's hurricane relief fund. A silent auction would open following the speeches, complete with attractive prizes like 76ers tickets and STARR Restaurants gift cards.
At the beginning of the ceremony, $2,000 had already been raised for Puerto Ricans in need.
Mayor Kenney, who was scheduled to make the opening remarks, had much to say about Puerto Rico and the federal government's disastrous disaster response.
Kenney gave a rousing speech, stirring the crowd with his blunt, straight shooter talk on the issues and his effusive gratitude for Philadelphia's role in aiding Puerto Ricans on the Island and those who have chosen the City to relocate.
Kenney began by not only acknowledging Unidos PA'PR's work but also acknowledging PECO's decision to send 16 employees to Puerto Rico to restore electricity.

"And let me remind you, particularly those in the current administration in Washington D.C., that Puerto Ricans are Americans. They are Americans. Not a foreign country... And, to think of how poorly we treated these fellow Americans, is just disgraceful," he continued.

He joked about the "bad rep" of lawyers and politicians, but strongly affirmed that elected officials and the courts are "the only salvation we can have from this madman."
This sparked many whoop-whoops from the crowd.
Excited chatter quieted down once Kenney sombered the mood, and mentioned how he hadn't felt "this unsteady about the state of the country" since he was ten years old in 1968.
A time when the country was, metaphorically, in flames, Kenney listed The Vietnam war, civil rights marches, anti-war marches, Dr. King and Bob Kennedy's assassinations, and Nixon, as some of the occurrences which gave way to so much instability in the U.S.
Kenney later compared the anti-immigration stance of the current Administration to the attitude of those who shunned the Irish-Catholics escaping famine, immigrants with whom Kenney is descended from.

"And the thing that they just don't get... Is that the more diverse we are, the stronger we are. Their agenda is pretty clear. You would hope that... In the beginning, like it wasn't really that overt, until Virginia, until the Norway comments, until the s-hole comments... You know? What is in their- Robert Mueller's, Stephen Bannon's, Trump's head -is that they're losing the foothold in America because they're White... Their whole goal is to pit one group against the other so that they can have perceived power, this perceived prestige that they have, which they don't have. They lost it when they lost their souls."

Kenney concluded by calling on Philadelphians to stick together, treat one another with respect, love, and decency, and for the lawyers and courts to continue defending our rights.
The La Justicia Award was presented by the current President of The Hispanic Bar Association of Pennsylvania, Jacqueline Romero.
Romero went through the repertoire of accomplishments in Febo-San Miguel's career as doctor and advocate, highlighting milestones such as moving back to Puerto Rico in 1979 to serve a rural population at Naranjito Health Center and raising $11.5 million to purchase the "state-of-the-art" facility for Taller Puertorriqueño's base in North Philadelphia. Romero, on behalf of all of the HBAPA, applauded Febo-San Miguel's bravery on being the face of the previously mentioned gerrymandering complaint.
By the time Febo-San Miguel made it to the podium to accept the award with a speech, she admitted that she could barely hold back her tears.

"I am deeply, deeply touched by the recognition, and to giving time to such a powerful name and concept... Justicia," she commenced.

Born in Ciales, Puerto Rico in the midst of a struggling family of seven (Febo-San Miguel is one of five siblings), she emphasized how remarkable her two parents were. The lessons they taught her as a child would later imbue her with the tenacity and generosity needed to embark a life committed to public service and community engagement:

"They were loving, vigilant, liked to celebrate, were generous to others, and inspired in us respect and appreciation of our heritage. For me, they set an example that has been a constant guiding light."

When Febo-San Miguel came to The United States in 1974 to complete her medical residency at Hahnemann Hospital and Medical Center, she was provided the opportunity to connect with people who shared her intensity of giving back.
Nevertheless, there were some initial adjustment pains and culture shocks:

"I found myself in an environment that was devoid of the representation of the essence of who I was as a person."

Her turning point was discovering Taller Puertorriqueño, where she has held an administrative and leadership position in for the past 33 years. In Taller, she found a space to express, celebrate, and share her Puerto Rican roots with Philadelphia's Latino community and in general.

"This work is an expression of another one of those lessons I learned at home: that arts and culture are integral to our development and in our lives. Every day I see this confirmed as I see how Taller's programs inspire children, encourage youth to develop their potential, strengthen family ties, contribute to the community's economic development, and serve as a venue for culture and education."

Other than working as Executive Director of Taller Puertorriqueño (she stopped privately practicing medicine after her second run with breast cancer), Febo-San Miguel has been involved with efforts in repealing the Jones Act, which she affirms has significantly contributed to Puerto Rico's current economic crisis.
Febo-San Miguel closed her acceptance speech by thanking The Hispanic Bar Association of Pennsylvania, Unidos PA'PR, elected officials such as Councilwoman Maria Quiñonez-Sánchez and State Representatives Angel Cruz and Emilio Vazquez.
Her final sentences reverberated in the room, as she relayed resolute, adamant words on why she and other Philadelphians must work to seek out unfairness in the country and act accordingly:

"What has happened to Puerto Rico is a natural disaster superimposed on a politically-made disaster... Many of you have contributed to relief efforts, and I thank you, but I urge you to be more generous and not let this crisis be placed on the backburner. We will need to work on this recovery with a lot of help and for a very long time!"

If you would like to make a donation to Unidos PA'PR's hurricane relief fund, please click here.