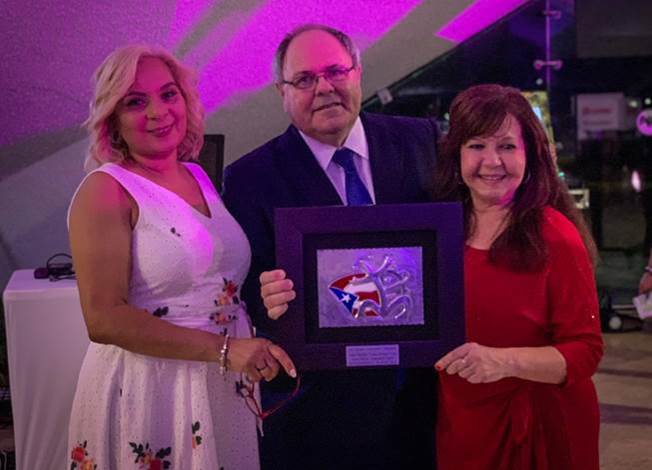 During the SOMOS Conference, Consul General Dani Dayan highlighted the importance and power of partnership.

Israel’s consul general in New York Dani Dayan received the Humanitarian Leadership Award on behalf of Israel at the SOMOS Conference in Puerto Rico on November 12.

The State of Israel was honored for demonstrating leadership in its humanitarian efforts in Puerto Rico in the aftermath of Hurricane Maria in 2017.

Hurricane Maria destroyed 80% of Puerto Rico’s agriculture and 95% of its electricity. With winds coming at 150 miles per hour, the hurricane destroyed 230,000 homes. Almost 3,000 people were killed during the storm. Survivors had no electricity and no clean water.

A few days after the hurricane, Israelis were on the island distributing food and water filters. Members of IsraAID, an Israeli humanitarian non-governmental organization that responds to emergency crises and engages in international development around the world, teamed up with the Jewish community of Puerto Rico to help in any way they could. They brought mobile health clinics, and provided resilience training to the shell-shocked population. Some of these Israeli humanitarian workers have remained in Puerto Rico to help with mosquito control and posttraumatic stress. They will return to Israel when they feel that the Puerto Rican people can carry on without them.

Many Puerto Ricans left for New York as soon as they could travel after Hurricane Maria. They received assistance from Somos to integrate into their new lives. At this year’s conference in Puerto Rico, SOMOS is working on finding a solution for Puerto Rico’s destroyed electric power grid.

Consul General Dani Dayan, born in Argentina, said during the conference, "As a native of Latin America myself, I am especially moved by this tribute. This award for Israel’s efforts in Puerto Rico is a testament to the power of true partnership. Israel prides itself on consistently being one of the first countries to arrive at the site of a humanitarian crisis, and we will always follow through with our efforts long after the disaster has struck. We look forward to continued work alongside the resilient people of Puerto Rico.”

SOMOS is a New York-based charitable organization whose mission is to unite the Latino community to work towards improving their socioeconomic and civic status. This organization collects money to fund college scholarships, apprenticeships, and internships. Ultimately, the goal is for young Hispanics to succeed professionally, to grow, and to develop.