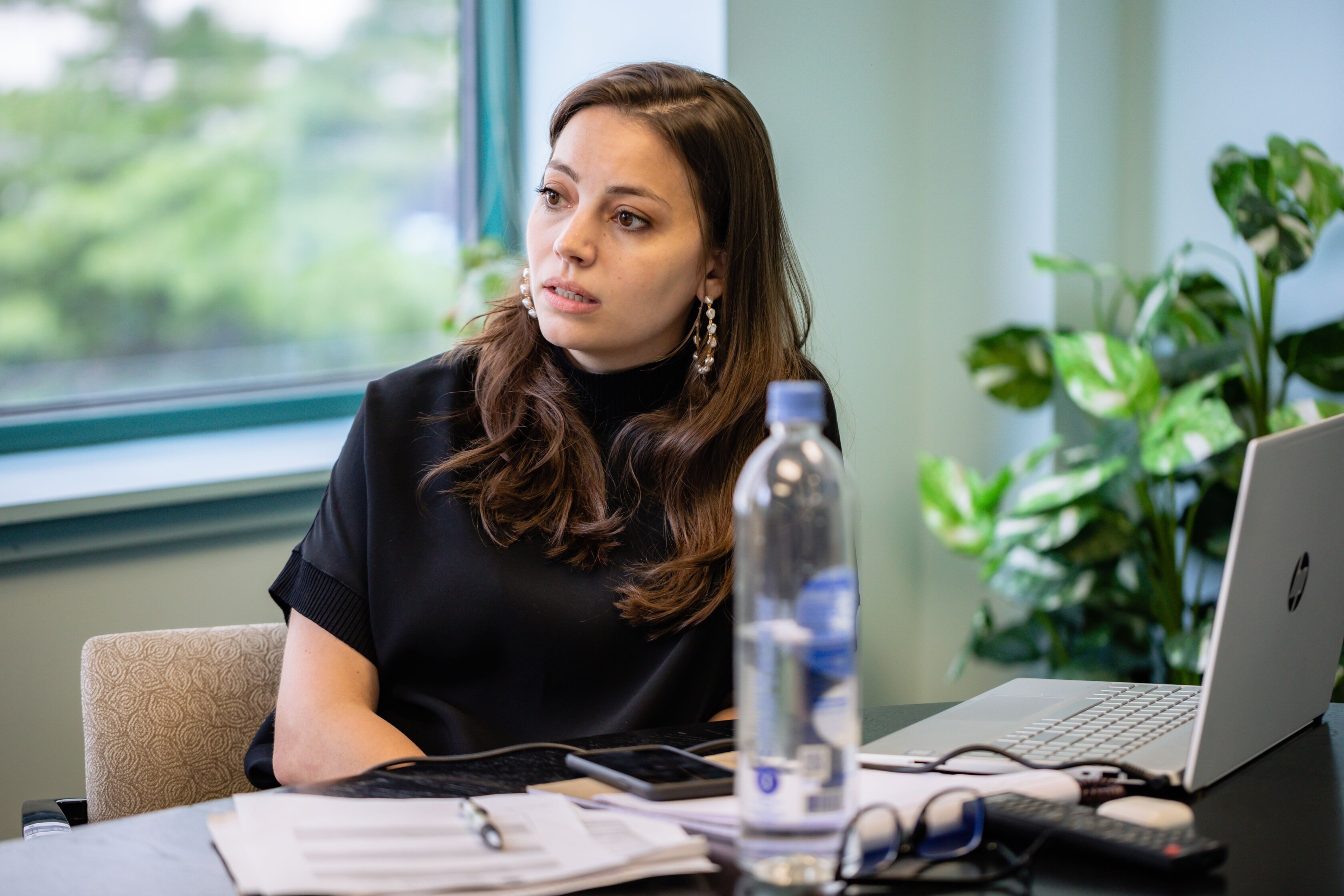 In her new role, she hopes to bring a much needed voice to those most impacted by the city’s surge of gun violence and homicides with the goal of driving…

As we look back at the past 18 months, Philadelphia and the U.S. have faced a very critical moment in their collective histories.

From the myriad effects of the ongoing COVID-19 pandemic, to an increased surge of gun violence and homicides, and organizations taking the long overdue steps to increase diversity, equity and inclusion in reflection of its populations.

All of it has led to a movement that will have ramifications for years to come.

As Philadelphia continues to see its share of gun violence and homicides — numbers not seen in decades — the need for support and counseling services has been heightened.

With the increased level of violence disproportionately impacting communities of color, it’s important to have strong, diverse leaders and voices who can bring about positive change.

In June 2021, the Anti-Violence Partnership of Philadelphia (AVP) officially appointed Natasha Danielá de Lima McGlynn as its new executive director. She is the first Latina to hold the top leadership position in the organization’s 38-year history.

Due to the aforementioned challenges over the past 18 months, de Lima McGlynn begins her role during a very crucial time in our city’s history, placing her as one of the diverse leaders the city truly needs.

Adopted by a Brazilian mother and Irish-Italian father, de Lima McGlynn was brought to Brooklyn, New York ⁠— where her father is from — as a baby.

Her full name is a reflection of her full identity.

Growing up in the Bay Ridge neighborhood of Brooklyn, de Lima McGlynn faced numerous challenges when it came to embracing that very identity.

As a child, she took that advice in an attempt to assimilate better with her peers, and it still led to her being bullied for being different. However, she became an American citizen at the age of 13.

“It wasn’t until I was in tenth grade [that] I went to a very diverse private school,” said de Lima McGlynn. “I had an incredible mentor who really helped me really lean into my identity and learn to really embrace who I am.”

Despite growing up speaking Portuguese at home, during high school when her maternal grandmother fell ill, de Lima McGlynn started thinking about the importance of maintaining her connection to her native country and language.

It is what prompted de Lima McGlynn to attend Smith College, one of the few colleges in the nation to offer Portuguese and Brazilian Studies as a major.

“That’s what really drove me to Smith,” she said. “I needed to build that bridge. I couldn’t rely on anyone [building] that bridge for me.”

Coupled with the times she’d often visit Brazil as a child, and despite being raised in the United States, it still felt like home.

“It feels like when I go back to Brazil, I kind of become a different person,” she said. “I feel more relaxed and in my element.”

Coming into her own

The journey from high school to college really helped de Lima McGlynn learn more about who she is as an individual.

“That’s where I felt that if we can talk about who we are and be our authentic selves and not have to lie; that’s a big deal,” she said.

Prior to that, she often felt the need to hide her identity.

Part of that reality was brought on by the racism and discrimination that both she and her mother have endured in their lives.

As she continued her education and got older, she found the path that allowed her to focus, be more free and authentic, and embrace who she really is.

“It’s kind of like removing barriers,” de Lima McGlynn noted. “When you have that ability to just be yourself.”

At the same time, as she got older she understood more that the words of advice her mother gave was about protecting her.

“I am Latina, that’s who I am. I am Brazilian,” de Lima McGlynn detailed. “There is this gross misconception about Latinos in this country, [and] that is [why it is] so important to increase visibility.”

Upon earning her bachelor’s degree, de Lima McGlynn became the first woman in her immediate family to do so.

“It means a lot to me because of my personal experience,” said de Lima McGlynn. “I’ve seen intimately what it means to struggle as a woman.”

“I feel very blessed. And I feel a responsibility to just keep doing as much as I can,” she added.

Finding a niche (and a new home)

After graduating from Smith College in the midst of the Recession, de Lima McGlynn began her professional career working at law firms in Washington, D.C. — inspired by her father, who is a corporate counsel.

However, she soon came to the realization that a career in the legal field didn’t really resonate with her.

Living in Washington D.C. at the time, de Lima McGlynn began taking policy classes at Johns Hopkins University, and shortly thereafter, entered the federal workforce by joining the Board of Governors of the Federal Reserve System.

She felt that working in the federal government resonated more with the type of work she wanted to pursue: helping people. However, after a decade living in D.C., she began to wonder about how government works outside of “the belly of the beast,” as she called it, in D.C.

That curiosity drew her to the University of Pennsylvania’s Fels Institute of Government to pursue a master’s degree in Public Administration — a decade after earning her bachelor’s.

Shortly after starting her master’s program at Penn, however, her best friend, Wendy Martinez, was tragically murdered in D.C.

“That changed everything for me,” said de Lima McGlynn.

However, amid her grief, she had Penn and a new city she called home in Philadelphia.

She refers to her new home city, Philly, as “my safe place” that “felt like a sanctuary.”

“Philly has been a healing place for me,” added de Lima McGlynn.

She decided to model her entire graduate research on violence against women in public spaces, to both honor her best friend and also help her understand ways to address violence from a public administration lens.

The project earned her the 2020 Fels Public Service Award.

During her final semester at Penn, de Lima McGlynn decided to join the board of directors for the Anti-Violence Partnership of Philadelphia in March 2020.

She couldn’t have predicted going the non-profit route.

“I started grad school with one intention,” said de Lima McGlynn, “to go back [and] rise up in government.”

“But my journey just kind of took me in a totally different way. And I gave into the journey,” she added. “I leaned into it, I trusted God and I said, ‘He has a plan for me and I just need to lean into that... This is where He wants me to be.’”

Her appointment made de Lima McGlynn the first Latina to lead the agency as its executive director. In addition, for the first time in its nearly 40-year history, its board of directors is 100% Black, Indigenous, and People of Color (BIPOC).

“We are in a pivotal moment in the organization's history. Communities grow and evolve over time, and as a nonprofit, we should be growing and evolving with the communities that we serve,” said de Lima McGlynn.

With a city as diverse as Philadelphia is, the leaders in the city should be reflective of that.

As a leader, de Lima McGlynn wants to increase engagement, and ensure that each program and activity aligns with the needs of the community.

“I think that’s why it’s important that we have leaders who are diverse, because they have an understanding of certain dynamics and relations,” she continued. In addition, she hopes to foster a culture of belonging at AVP, which is very important to her, given her personal experiences of often being ‘othered.’

“We need to be actively addressing the notion of ‘belonging’ when we discuss diversity, equity and inclusion,” she said.

While creating equitable access to jobs, promotions and seats at the table, in the name of a more diverse workforce, is crucial, de Lima McGlynn believes another layer must be added to ensure employees also feel a sense of belonging.

“It is a feeling that transcends merely feeling seen, heard and recognized. To belong means you are valued — individually and authentically,” she added.

This moment in time is going to be pivotal as the agency embarks on a new chapter.

Addressing a growing violence surge and its effects

While de Lima McGlynn is grateful and celebratory to be taking on this new role, she does it during a very urgent, serious and challenging time in our city.

In 2020, Philadelphia reported a total of 499 homicide victims, numbers that haven’t been touched in the city in decades.

“The pandemic has exacerbated preexisting, unjust, unfair conditions, and as a result of that increase in violence, more and more folks are being affected,” said de Lima McGlynn.

“Violence has ripple effects,” she added.

The increased violence has also resulted in a shortage of counselors and increased wait times for those who need the various services for social and counseling service providers in the city.

For AVP, de Lima McGlynn noted a 600% increase in its waitlist for counseling services since this time last year.

“That speaks to the humanity of the situation,” she said. “These are people who are hurt and they are in need of assistance to help them navigate their grief and loss and trauma.”

This adds another layer of gravity to the effects of gun violence in our city; it magnifies its level of urgency in addressing the matter.

While there is no one end-all, be-all cause or solution to the violence-related crisis taking place in the city, part of the problem can be linked to an absence of support.

That could go a long way towards preventing the high level of violence taking place in the city.

In addition, de Lima McGlynn pointed to a stigma around mental health as another factor in the toll of violence in Philly.

“As a Latina, I can speak to this experience,” she said. “In my culture, there is a stigma against mental health... if you're feeling down, go pray. And that's not always the solution.”

“It’s very important that we take efforts to become more open about mental health,” she added.

All in all, under her stewardship, de Lima McGlynn would like for AVP to take new, innovative approaches to the way the organization considers and delivers its services. With over 270 shooting victims this year being of the ages 19 and under, 42 of whom were fatal shooting victims, she’d like to see youth have a more amplified voice in the violence discussion.

To this end, AVP is launching a Youth Advisory Council this fall to provide a new avenue to engage and empower its youth clients.

This is in addition to AVP’s partnership with over 30 Philly schools through its Youth Violence Outreach initiative, to provide individual and group counseling to students, which has proven to produce positive outcomes.

“I feel that’s the step forward that we need [in order] to be more responsive and proactive,” said de Lima McGlynn. “We need to be engaging our youth and cultivating positive peer relations, teaching them how to address conflict nonviolently.”

To learn more about AVP, or how to help support its mission to reduce the cycle of violence in our city, click here.