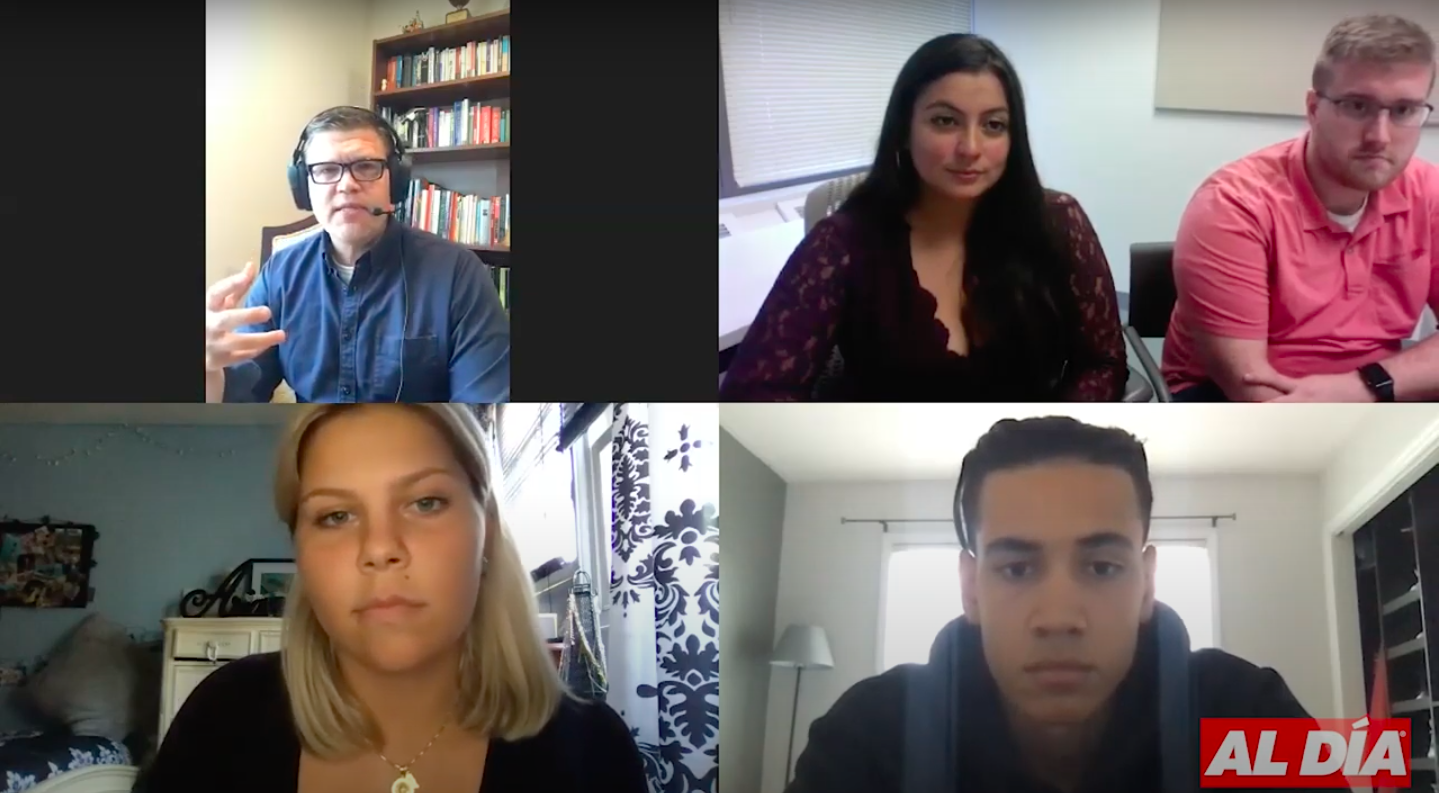 The Class of COVID-19: Turning the pandemic into a remarkable story

High School seniors from Cliffside Park, New Jersey created a book about their life-changing experiences during COVID-19 led by their English teacher..

“The power of the whole project is about hearing their voices,” opens Shawn Adler, English Honors teacher at Cliffside Park High School.

Two students, Arianna Khelil and Jesus Pena, who wrote about their experiences amid the COVID-19 pandemic for Adler’s English class, joined AL DÍA virtually on July 2 for a RoundTable Talk about the stories they told.

High school students don’t often open up so quickly and as descriptively as the ones interviewed. Arianna and Jesus were enlightening and spoke about their stories passionately.

When Jesus first heard of writing a book from Adler, he said it was surprising. Quickly though, he saw that it was easy. He felt he lost so many things: his baseball season, his coach, and the last part of his senior year.

For Arianna, she added that it was relieving to write about her father, who battled COVID-19.

“Writing about my dad and my experience made me feel better. I’m happy we got to use our voices and speak up, and I’m happy to know that we were not alone,” she said.

Jesus said he was hesitant at first about sharing his story because of the death of Coach Ben, his baseball coach..

Still preparing for the upcoming baseball season he did not pay mind to the virus at first. Then tragedy struck.

“Being that I was, the time period that everything took place — coach came down with it. When he died I held myself accountable for his death in a way, because my teammates and I were being dismissive of it,” said Jesus.

One question crossed his mind.

“What if I gave him the virus? So I was hesitant [sharing] because I would be putting my guilt out there,” he said.

Though it cannot be traced how Coach Ben caught the virus, Peña still felt at blame because he said he caught COVID-19 himself on March 18.

When asked about Coach Ben, Jesus said he was the funniest person he had ever met. He motivated, educated, and pushed him to be better.

“A genuine guy. Just wanted the best for his students and players,” said Jesus.

When discussing how how their school experience shifted, Arianna and Jesus said they were focused on just getting through their classes.

However, they said the book was a motivator to get by throughout the year.

“Mr. Adler always talks about choice and change in a story. That’s what makes a story. So in the beginning I didn’t take this seriously now I am, and it is how I’m learning to forgive myself. I may have made a mistake then but now i’m taking care of myself and the people around me,” said Jesus when asked about the significance of sharing his story.

Arianna, explained that for her, the pandemic was not only about the virus, but the chaos and uncertainty it made of her life. With her dad unable to take on his role of doing everything around the house, she had to grow up along with her brother.

“I took my dad and all the stuff he did for us for granted,” she said.

The second-to-last sentence of Arianna’s reads: “By the time you read this, we will know how his surgery played out. We will know whether he lived or died,” referring to her father’s bout with the virus.

She caught us up on what happened, and her father is doing well.

Arianna Khelil is attending Marist College in the fall and studying to be a PT. Jesus Pena will be attending Ramapo College and will be pursuing a nursing degree.

Mr. Adler added that the experience rewarded him with being able to hear about his students’ experiences with the project.

“I don’t think they realize or they know how truly special they are. It is especially tough for kids to be as vulnerable, raw, and truthful as they are. I think listening to them talk about their experiences has been amazing,” said Mr. Adler.

Once again, congratulations on graduating to Arianna, Jesus and the rest of the Class of 2019!

The Class of Covid-19 book is available online, and the link is below: