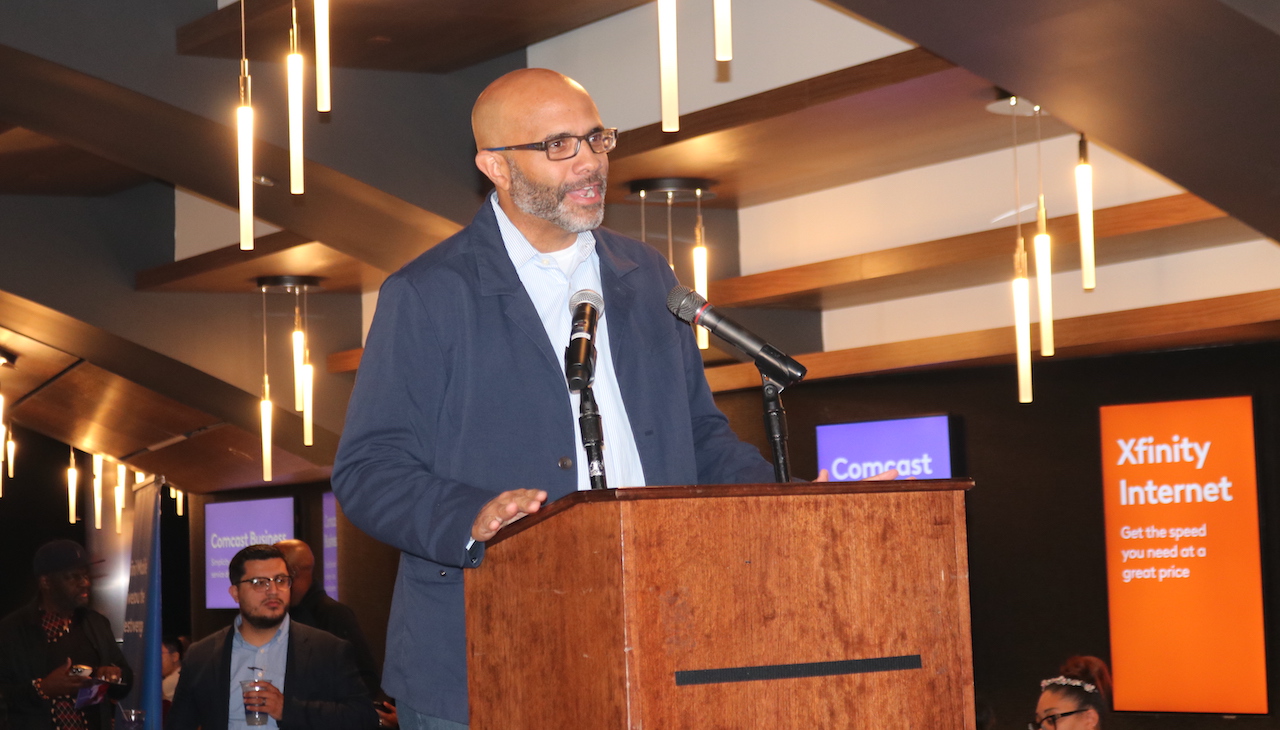 Hundreds of POC small-biz owners gathered in South Philly to honor the program’s impact and see what the future holds.

Amid the COVID-19 pandemic, Carmencita Ramos saw a lot of small businesses like her own close down under the pressure of such drastic societal and economic changes.

But for Global Gheins, Ramos’ tax and business consulting firm, the pandemic business cycle ended on a high note largely due to support she got from Comcast’s RISE program.

“When I say that that year has been the revenue year for me so far, it has,” she said of her business, which has had a storefront on 5th Street between Chew and Grange Avenues since 2018.

Ramos was nominated for the RISE program by a neighbor, the North 5th Street Revitalization Project, which saw her business grow from day one.

“They saw me open up, they saw me just starting, they saw me with one employee, and they just loved how I was trying to build my business,” said Ramos

RISE, standing for ‘Representation, Investment, Strength, and Empowerment,’ was launched by Comcast during the first year of the COVID-19 pandemic, and targeted Black-, Latinx-, LGBTQ+-, Women- and AAPI-owned businesses with an array of support from monetary grants and TV advertising spots to technological advancement and consulting services.

On the night of Tuesday, Oct. 18, a number of RISE recipients from the Philadelphia region were in attendance at the Wells Fargo Center to not only look towards the future of the program as it continues to help small businesses on a national scale, but also take stock of the impact it’s already had on hundreds just in Philadelphia.

For Ramos and Global Gheins, that impact came through RISE’s technology makeover service.

Her company helps individuals and businesses file taxes along with providing consultation for startups. When it comes to the tax service portion of the business, which is Global Gheins’ bedrock, she said there’s often fear from those in the community of what they don’t know about the process. As a result, people fall behind.

“What I do at Global Gheins is first, I educate,” said Ramos. “So I make the community aware, like: ‘Listen, let me teach you the simplicity that comes with taxes and the benefits.’”

The long-term goal is that her clients in the surrounding community can thrive based on their consultations. Over the years that work has made Ramos somewhat of a leader in the Olney section of North 5th Street, as people now come to her for not just tax advice, but also referrals to other resources in the community.

With the RISE program’s technology makeover, Ramos said she was able to take her business beyond just its storefront on 5th Street. That had to be closed as the pandemic set in, but she was provided with iPads, a year of business internet and more technology to take Global Gheins to the much larger world of the internet. It also allowed her to expand the business to offer more digital-only services.

“It really opened my eyes to say: ‘You know what Carmen? You’re not just a storefront. You’re actually able to reach people and individuals through the internet,’” said Ramos.

The same technological makeover also came to Tynesha Cofield’s Praise Kidz Korner Child Development Center. The business has a family location on North Broad Street near LaSalle University and an academy in Fishtown. Both provide daycare and early education support for infants through seven year olds.

As the pandemic set in, Cofield was in the process of moving into her location on North Broad Street. She said it gave her more time to set the business up, but there was still uncertainty.

A friend also in the early education space is who eventually put Cofield on to the RISE program.

“She sent me the information in an email,” said Cofield. “‘Apply immediately’ is what she said, basically not to drag my feet about it.”

Cofield applied and said it took some time, but she eventually received a number of laptops and iPads in the mail to boost her business.

“It was a blessing because it allows us to expand in terms of curriculum,” she said. “We do have the technology now, whereas before we didn’t.”

In addition to a networking session with other RISE recipients in attendance, the night also included remarks from some in Comcast and city leadership, and offered tours of a new executive suite at the Wells Fargo Center.