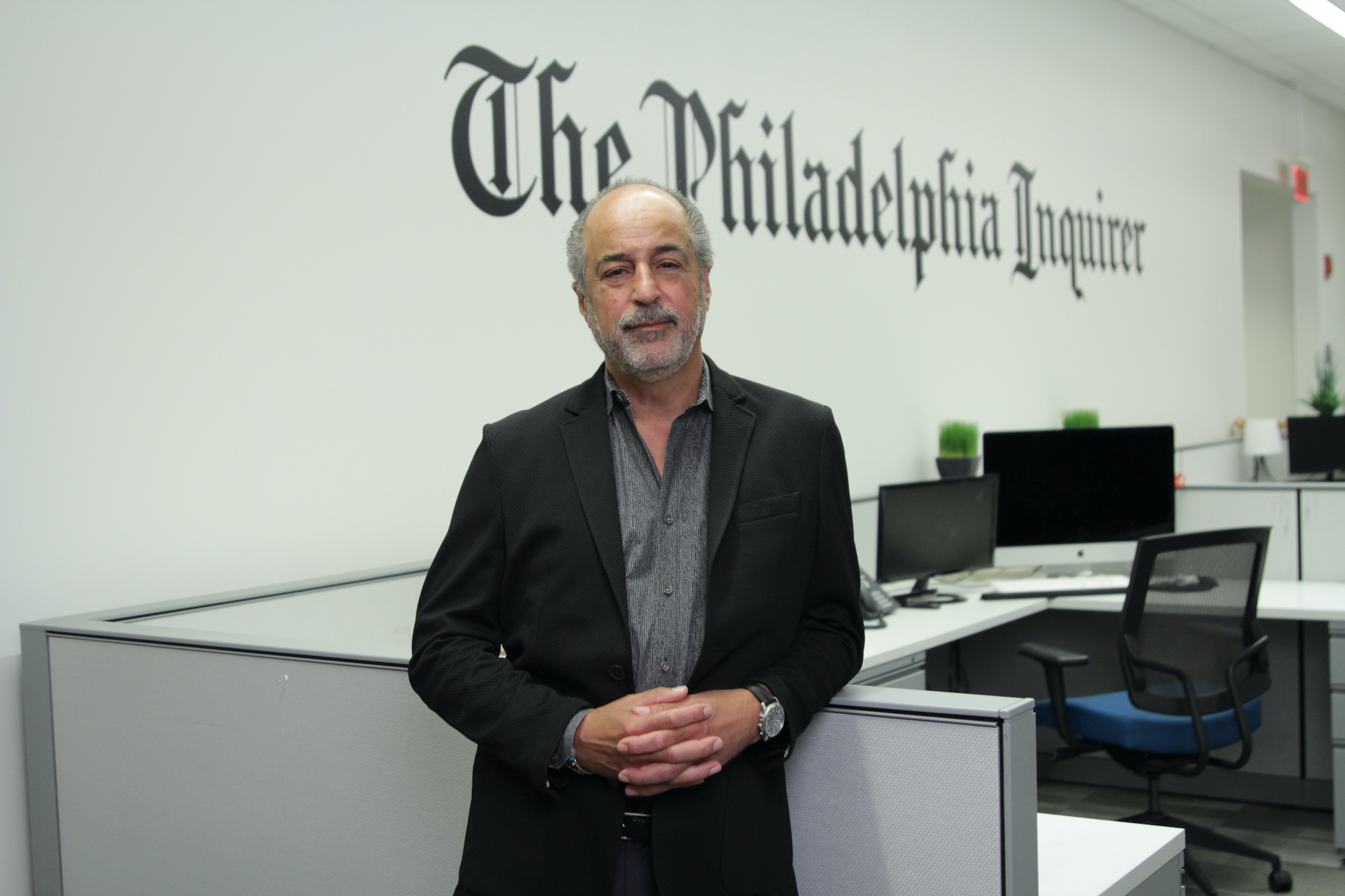 Gabriel Escobar is the senior vice president and editor of the Philadelphia Inquirer. Photo: Shea Durant

Philadelphia Inquirer top editor Gabriel Escobar got into journalism on a whim.

For the longest time, he thought a future in creative writing would be his calling card — poetry to be more specific.

At Queens College, where he graduated with a degree in creative writing, he read canon writers like Keats, Aulden, and Plath. Before that, in high school, Escobar was fond of writers like Beckett and Hemingway. There was even Faulkner, who he read for the first time during a brief, three-month trip across his home country of Colombia after he got his Master’s in journalism from the University of Maryland.

Escobar now recalls that bringing Faulkner to read on the trip a “mistake.”

“I had a great time, but I didn’t write a single word that meant anything,” he said.

His poet dreams built and fizzled out over the nine years he spent working for the New York Public Library from high school up until two years after he graduated from Queens.

The branch closest to his family’s home in Jackson Heights was a haven for him and his brothers growing up. They would go every Saturday to check out books and it’s where Escobar first discovered his love of reading and writing.

Him and his three brothers first moved to Jackson Heights from Bogotá, Colombia with his mother, Clemencia. The decision was made after his father died, and when she decided to want no part of the upper-middle-class life she was reared in.

“Do not let pride prevent you from coming back if you do not succeed,” Escobar’s uncle wrote to his daughter not long after her flight to America.

Escobar himself was seven when first coming to the States. Most of his memories are second-hand from his older brother, but he does remember his mother saying that their first day of school at P.S. 69 in Jackson Heights was the hardest of her life.

“That morning, whatever September morning that was, she was dropping off her two oldest kids in a place that was completely alien to her and obviously alien to us,” he said. “And maybe in that moment, she realized the enormity of her decision.”

His mother’s only request of her children was to do well in school and succeed. It led to them all being extremely focused.

A young Gabriel excelled especially in his English and literature classes, and it picked up even more when he started working at the New York Public Library in high school.

There, not only was he able to read on the job, but he also fell in with the crowd of aspiring writers that also worked there as information specialists.

“It was such an interesting crop of people,” said Escobar. “I absolutely loved working there.”

But after nine years, he hit a critical juncture. At the highest position he could be without a Master’s degree, the New York Public Library System offered to pay for his continued studies at Columbia University in library science.

“I thought to myself: ‘I’ve been here nine years, am I really going to spend the next 30 or 40 years here?’” said Escobar.

He applied to journalism school instead, arriving at the University of Maryland just as a transformative dean also came to the school and overhaul its journalism program.

Escobar graduated before any of the dean’s efforts bore fruit, meaning he had no news clips to work with when applying for jobs. All he had was a thesis.

He returned to New York City, took a three-month tour of Colombia, and then taught Spanish for less than a year before getting his first opportunity in journalism from an old friend that also went to P.S. 69 and was an editor at the hyper-local Queens Tribune.

As a test, Escobar was sent to cover an event protesting the U.S.’s involvement in El Salvador’s Civil War held at his alma mater, Queens College.

“I had never done anything like that, not even in journalism school,” he said. “I went there, I sat in the back. I took notes, didn’t speak to anybody, went back home, wrote it out long-hand, then typed it and then sent it.”

Escobar was hired shortly after.

From there, Escobar would go one to report at papers like the Hudson Dispatch, the Hartford Courant, and then the Philadelphia Daily News before landing at the Washington Post.

All along the way, he took lessons from the practice of journalism.

“Journalism really is a craft, and it’s one of those few professions… that you actually learn on the job,” said Escobar. “You can go to journalism school and they can teach you the basics, but you become good incrementally by doing it.”

At the Hudson Dispatch, Escobar said he learned how to become an expert on a subject through reporting — in his case it was housing. He also learned from his interactions with the large Cuban population in Union City, New Jersey, the importance of drawing a line with sources, especially those he could connect with in Spanish.

In Philadelphia, he was captured by both its history and neighborhoods.

“The city seemed enormous to me, even though I grew up in New York. I think one reason why it seemed so big is because it was so many cities in one,” said Escobar.

When he joined The Post, he first rose to become the bureau chief in Latin America, exposing him more to the diversity of that part of the world.

“If you think it is unified by language and unified by religion, it is different and divided in many more ways,” said Escobar.

The Post also gave him his first taste of editing, which he did as the city editor for six years between 1999 and 2005. In his time in that role, he led coverage of major stories like 9/11 and the D.C. snipers.

From there, he went to the Pew Research Center for almost two years before starting his first tour as an editor at the Philadelphia Inquirer in 2007.

He came at a time when the paper was struggling financially. A new digital landscape was overrunning the traditional print business, and newsroom leaders were scrambling and cutting their way to financial viability.

Escobar left a few months before the Inquirer moved from its historic home on Broad and Callowhill to its current one on Eighth and Market. He went to Dallas, where he would teach journalism at SMU and write as a columnist at the Dallas Morning News.

He returned to Philadelphia in 2012 as a deputy editor and then rose to be managing editor in 2015.

Top editor in a challenging year

Escobar was named the top editor in November 2020 in the aftermath of the paper’s “Buildings Matter, Too” controversy, which compared Black and Brown lives to buildings during 2020’s George Floyd protests, and led to the resignation of former top editor, Stan Wischnowski.

The controversy required the paper and its leadership to do some soul-searching and come up with clear, define-able goals for diversity, equity and inclusion both in the newsroom and its coverage.

Those goals have been Escobar’s to carry out. He for one, said he’s firm believer that there’s a correlation between the quality of coverage for a community and city, and the diversity of the newsroom’s staff carrying it out.

It’s one that will also not be fixed all at one time, but over time.

That being said, Escobar did point to clear goals the Inquirer must meet as hope for the future.

On another positive note, he celebrated what he called “heroic” coverage from the Philadelphia Inquirer staff over the past year and a half of the COVID-19 pandemic.

“It’s well over 500 days under the most challenging reporting situations that I have ever seen… and I was the city editor of The Post during 9/11,” said Escobar.