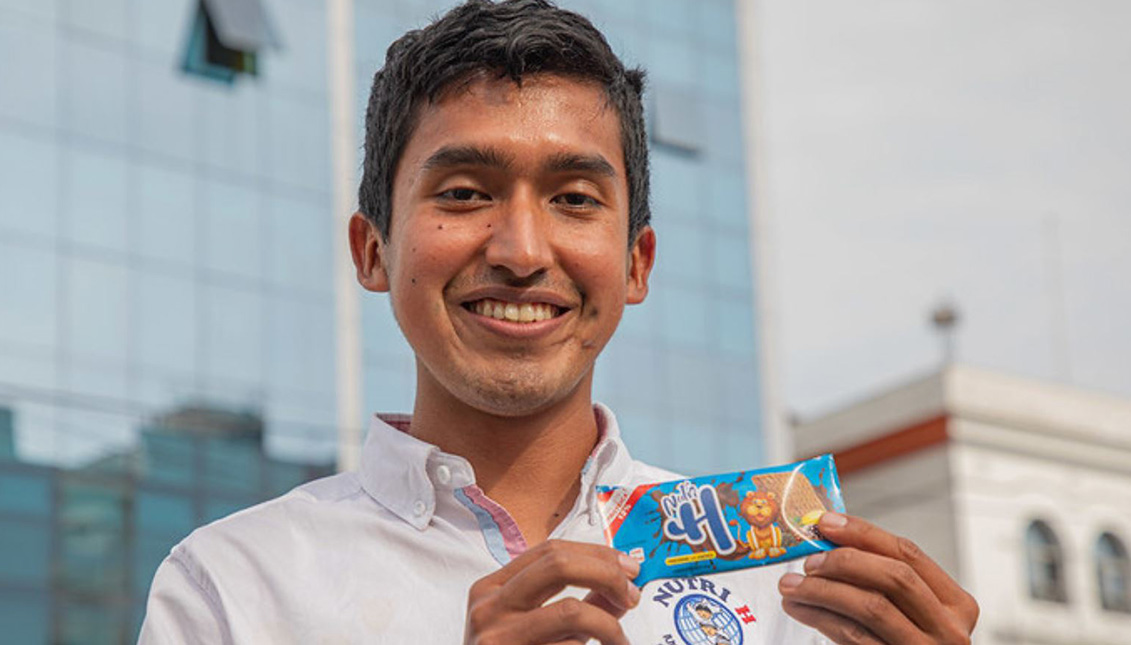 When Julio Garay was five years old, the doctors found him to be anemic, a disease marked by iron deficiency and affects more than 40% of Peruvian children. His mother gave him "sangrecita" (blood) to help him overcome it. Time went by until he got a scholarship to go to college, locked himself in the lab and swore he would not leave before undertaking a mission: to find the perfect formula to make cookies that would fight anemia in only 30 days of consumption.

Not only did he end up achieving what seemed impossible, but thanks to his innovation this agro-industrial engineer from Ayacucho (Peru) managed to win last year's History Channel's contest for Latin America "An idea to change history."

His invention, the 'Nutri H' cookies –for which, according to the engineer, up to eight countries have already shown interest– are composed of bovine hemoglobin (blood), quinoa and cocoa, and promise to eradicate childhood anemia as long as one packet a day is consumed during one month.

But the process of working towards this "perfect formula" was not easy... Up to 300 tests had to be discarded.

"I found so much passion that I didn't care if the days passed, the months... all the tests were in my room, previously labeled for each month and I would look at them and ask myself: What is missing? The recommendations prevailed. I always listened to suggestions and in the end, I was able to make it," he told RPP News.

Julio also got together with a group of Ayacucho mothers, who were able to see, he says, how their children had more energy and performed better in school after their consumption:

"The first district in which the test was done in Ayacucho was Ventanilla. In coordination with the municipality and the health sector, children suffering from anemia were identified. They were dewormed, screened and also given cookies for 45 days, for which talks had to be given to the mothers of the family. In the end, we were able to check that 50% of the children had come out of the anemia picture", he explained.

This is not the only invention born in Peru to fight this disease to which children and adolescents, due to their growth, are especially vulnerable.

Scientists from the Cayetano Heredia University have developed an application that allows us to measure anemia through a digital photograph of the conjunctiva of the eye taken with the cell phone, whose information is processed by a powerful algorithm that is responsible for determining the level of coloration; that is, hemoglobin in the blood.

Both innovations can be seen as part of the efforts being made by the country's government to fight iron deficiency in children. In fact, as announced by Prime Minister Vicente Zeballos, only last year a 3.4 point reduction in anemia in children under three was achieved, from 43.5% to 40.1%.