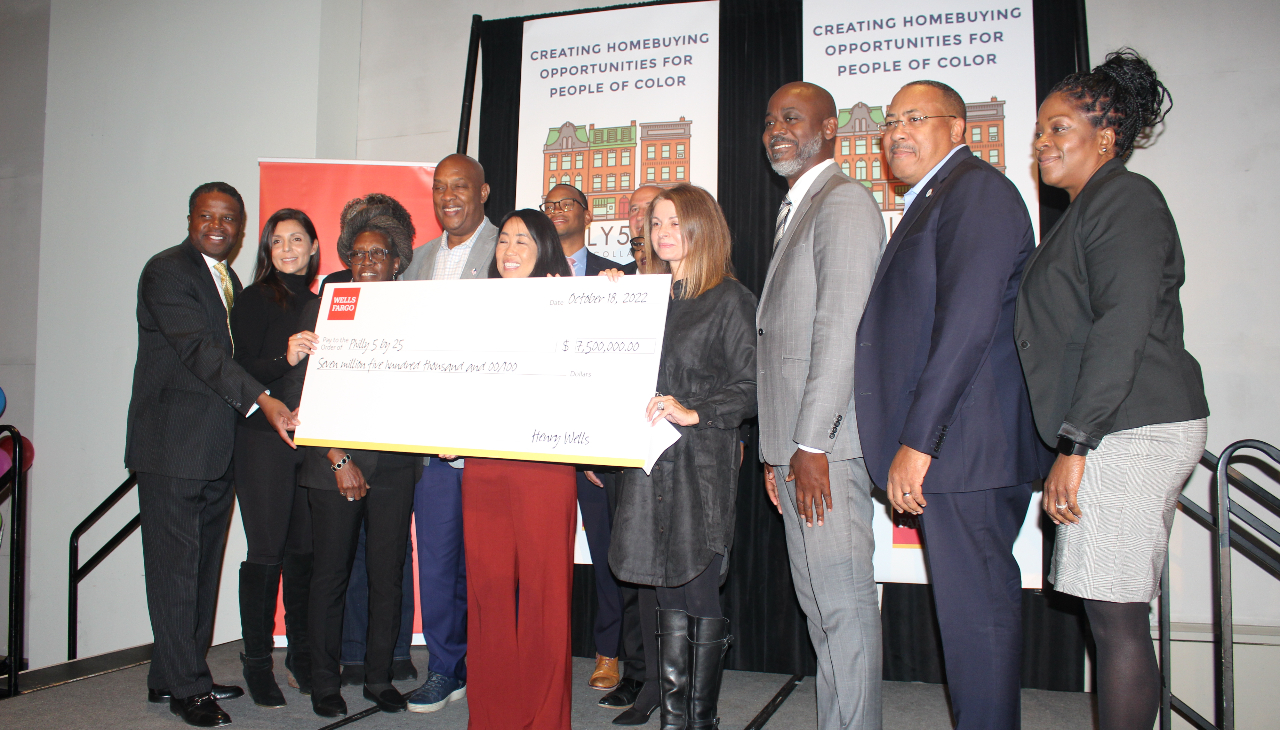 The funding is the basis of the new “Philly 5 by 25” initiative to help diverse people cover down payments and closing costs, leading to more home ownership.

A collaborative of Philadelphia organizations, nonprofits and community groups are coming together to address housing in Philadelphia.

On Tuesday, October 18, Wells Fargo announced a new $7.5 million grant to the Urban League of Philadelphia to expand affordable housing and homeownership across the Philadelphia region.

“This isn't charity. This is not a donation. It's an investment,” said Otis Rolley, head of social impact for the Wells Fargo Foundation.

Historically, systemic challenges have often served as barriers for many people to own homes and build wealth.

According to a 2021 report from the Urban Institute, Philadelphia faces a significant homeownership gap, with 59% of white households owning their homes, while only 48% of Hispanic households, and 43% of Black households do, respectively.

This effort is one that seeks to remove some of those barriers, which as Rolley described is “an economic imperative.”

“We as a nation cannot strive, we cannot be successful if we keep up the racial disparity that has existed,” he added.

The new funding will serve as the backbone of a new initiative called “Philly 5 by 25,” which is an aim to create more affordable housing opportunities for diverse individuals by providing grants to help cover down payments and closing costs.

He noted that down payment assistance has been among the biggest barriers to owning a home.

“A lot of individuals can afford those monthly payments, but it’s that initial payment to get inside the home — which is required by a number of lenders — is what many need a little help with,” Briggs added. “This initiative is a good step in helping close the gap in homeownership.”

U.S. Congressman Dwight Evans has been one of the biggest advocates for housing throughout his congressional career.

“Housing is not a partisan issue,” said Congressman Evans. “Housing is very essential… it’s important to understand the stability that it provides.”

A Philadelphia native, born and raised, she began her home owning process two years ago.

“I wanted to show my 22-year-old son and my 14-year-old daughter that if you work hard, be consistent and stick with it, you can own your own home,” she said.

With help from the Philadelphia Housing Development Corporation’s first-time homebuyer program and the Urban League of Philadelphia, she received a total of $12,000 in grants, which enabled her to purchase her own home and also refurbish it without having to deplete her savings.

Going through that experience provided her with critical tools, knowledge and resources. It was also a great confidence builder for her.

“It’s a huge investment, but you know what, you’re investing in you,” added Whitehead.

Keith Bethel, board chair for the Urban League of Philadelphia, shared a comment that adds to the mission of this new initiative.

“These types of grants are really focused on empowerment,” he said.

The “Philly 5 By 25” is a collaborative initiative that also includes critical support from organizations such as HACE, Congreso de Latinos Unidos, New Kensington Community Development Corporation, and the Urban Affairs Coalition.

Julia Rivera, chief external affairs officer at Congreso, spoke with AL DÍA to share why it was important for Congreso to be a partner in this effort.

She noted that stable housing is an important part of Congreso’s broader mission of economic self sufficiency and well-being.

“We know that owning a home can be a huge asset to folks’ futures, whether it’s for future goals for their children and building generational wealth… the housing component is so central to becoming economically self-sufficient,” Rivera told AL DÍA.

HACE, another partner in this effort, announced that the new grant will allow the leveraging of $59 million to launch a new program to help with the acquisition and renovation of homes.

In addition, with the help of the Pennsylvania Housing Finance Agency, a new pilot program can be launched in Philadelphia to help provide low-cost and low-interest mortgages, as well as down payment assistance.

“For us, it is really critical to be able to remove those barriers and provide support to those who need it, and that they are ready to be able to buy a home,” said Maria Gonzalez, President of HACE.

The donation that is bringing this effort to life comes from Wells Fargo’s Wealth Opportunity Restored Through Homeownership (WORTH) initiative, a $60 million national effort to address systemic barriers to homeownership for people of color.

Philadelphia is one of eight markets across the U.S. to receive a WORTH grant, and the goal is to create 5,000 new homeowners of color in the city by 2025.

“We’re glad that Philadelphia is one of the markets that this initiative has been launched in and are looking forward to seeing the results, as well,” Briggs told AL DÍA.