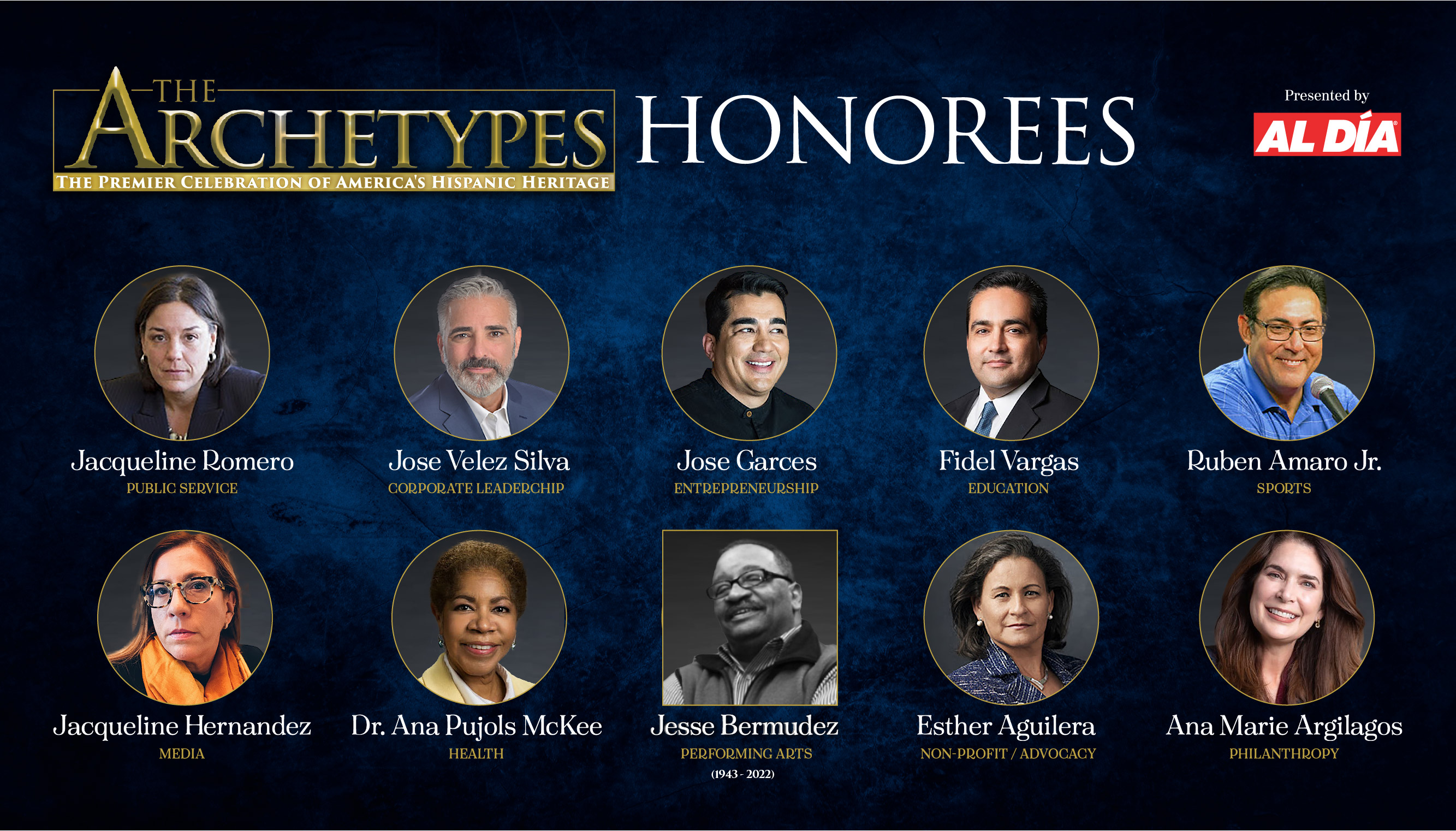 These are the 2022 AL DÍA Archetypes to be honored on Friday, Sept. 23, 2022 during Hispanic Heritage Month. Photo: Maybeth Peralta/AL DÍA News.

Meet the 2022 AL DÍA Archetypes: The honorees of this year’s celebration of America’s Hispanic Heritage

These 10 outstanding Hispanic individuals will be the second group to receive the annual Ambassador Manuel Torres Award this year on Friday, Sept. 23.

Each year since 2016, AL DÍA has made it a personal mission to put together the premier celebration of America’s Hispanic Heritage.

Officially celebrated in the U.S. each year from Sept. 15 to Oct. 15 since 1988, Hispanic Heritage Month is the annual timeframe in which the nation often does what AL DÍA strives to do every day — highlight, showcase and celebrate the outstanding leaders and professionals of Hispanic descent who are making a positive impact.

Beyond the typical awardees and honorees of most events, those honored at the annual Hispanic Heritage celebration presented by AL DÍA, are classified as “archetypes.”

These individuals are the opposite of the stereotypical representation in which Hispanics are often portrayed.

They are professionals who represent the true meaning of Hispanic Heritage in the United States with their contributions to our region in key areas, including entrepreneurship, health, philanthropy, education, public service and several others.

In the first five years of this event, five archetypes have been selected to be honored at the annual celebration.

Since last year, that number has doubled, as 10 outstanding representations of Hispanic Heritage and excellence will be honored with the 2022 AL DÍA Archetypes.

They will be honored with the second annual Ambassador Manuel Torres Award, named after Colombia’s first ambassador.

Jacqueline Romero is the United States attorney for the Eastern District of Pennsylvania, the first Latina to fill the prestigious role. She is also the first woman to be appointed by a President and confirmed by the U.S. Senate to hold the position, as well as the first woman of color and first person to identify as LGBTQIA+ to lead the Office.

She was officially confirmed into the role in June 2022, after 16 years as an Assistant United States attorney for the Eastern District of Pennsylvania. Her official installation into the role will take place in October.

As the chief federal law enforcement officer, she is responsible for all federal criminal prosecutions and civil litigation involving the United States in the Eastern District of Pennsylvania.

Over her 20-plus years in the legal profession, Romero has worked her way up from being a litigation associate to a trial attorney, and senior counsel before finding herself working with the Eastern District of Pennsylvania. She also previously served as an Adjunct Professor of Law in the Trial Advocacy Program at Temple University's Beasley School of Law, and as a Past President of the Hispanic Bar Association of Pennsylvania.

The daughter of immigrants from Spain, she is originally from New Jersey, where she originally launched her professional career at the law firm, Lowenstein Sandler PC.

Romero is a graduate of The College of New Jersey, where she earned a bachelor’s degree in English and Political Science, before going on to obtain her Juris Doctorate at Rutgers University School of Law in Newark.

José Vélez-Silva is the vice president of multicultural marketing and communications for Comcast, where he has worked for over a decade.

In his current role with Comcast, he is responsible for leading the company’s efforts to drive brand consideration and increase market share across multicultural audiences. He directs, oversees, and manages multiple multicultural advertising agency relationships, as well as all aspects of multicultural advertising campaigns, including strategy, concept development and ideation, and production and execution of creative for TV, digital, print, radio, OOH, retail, and social media.

Vélez-Silva is originally from Puerto Rico and remained living on the island until he graduated from college. From there, he relocated to New York City, set on becoming a voice for diverse communities and sharing the power of storytelling to Latino, and other diverse and multicultural audiences.

Vélez-Silva earned his bachelor's in business administration, with a major in marketing and finance, from the University of Puerto Rico and is a post-graduate executive program alum of the University of Virginia Darden School of Business.

After getting his initial culinary training and education at the Kendall College of Culinary Arts, he traveled to Spain to expand his skills and expertise there before a five-year stint working in a variety of restaurants in New York City.

During his training, he met with renowned leaders in the culinary industry, Douglas Rodriguez and Stephen Starr, who would both play integral roles in mentoring Garces as he looked to improve his skills and progress throughout his career.

In 2001, Garces relocated to Philadelphia, where in the years since, he has become one of the most prominent restaurateurs in the city, opening a variety of restaurants, including Amada, Volvér, Distrito and others.

Born and raised in Chicago, Garces is of Ecuadorian descent and uses his cooking skills to connect and help others connect with the Latino culture through cuisine.

Fidel Vargas is the President and CEO of the Hispanic Scholarship Fund (HSF), assuming leadership of the organization on Jan. 2, 2013.

As President & CEO, he sets HSF’s overall direction, develops and oversees the execution of strategy, leads the senior management team, plays an active role in the development and outreach activities for all constituencies, and advocates for HSF throughout the country.

Vargas has been a founding partner of several firms, including Centinela Capital Partners and Reliant Equity Investors. He also has a background in politics, making history as the youngest elected Mayor of a major city, when he became Mayor of Baldwin Park, California, at just 23 years old.

Vargas is the eldest of eight children born to parents who emigrated from Mexico. He graduated with honors from Harvard University with a bachelor’s degree in social studies. He then went on to receive his MBA from Harvard Business School, with a concentration in Entrepreneurship and General Management.

Rubén Amaro Jr. is a former professional baseball player, general manager and coach, who currently works as an analyst and color commentator for the Philadelphia Phillies.

A Northeast Philadelphia native, Amaro Jr. is a third-generation baseball player, as his father, Rubén Amaro Sr., and grandfather, Santos Amaro, both played the sport at a professional level.

For the majority of his time within the sport, Amaro Jr. has had some affiliation with the Phillies. He started out as a bat boy for the team for three years while he was a high school student at William Penn Charter.

After a few years away from the team, he returned as an analyst and commentator for the team in 2020.

Jacqueline Hernández is the Chief Executive Officer and co-founder of New Majority Ready, a marketing and content consultancy.

As co-founder and CEO of the New Majority Ready, Hernández leads the company’s mission in helping businesses and brands grow with multicultural customers by rethinking the term, ‘multicultural’ and incorporating it into their business practices.

With America's demographics and psychographics changing, the New Majority Ready aims to use marketing content and storytelling to build brands, develop strategies, market narratives, and turn data into actionable insights.

A multicultural expert, business leader, brand builder and change agent, Hernández also serves on a number of boards, most recently joining the Board of Directors for Victoria’s Secret in 2021.

She then went on to attend Tufts University, where she graduated with a bachelor’s degree in English and art history. She later went on to complete her graduate studies with an MBA in marketing from Baruch College.

In the role, Dr. McKee represents The Joint Commision enterprise as she focuses on and develops policies and strategies for promoting patient safety and quality improvement in health care, and leads the Joint Commission enterprise in meeting its goals of increasing diversity and inclusivity.

She is a Fellow of the American College of Physicians (ACP), a former board member of the American Cancer Society, the Pennsylvania Health Care Cost Containment Council, Philadelphia AIDS Consortium, and former board chair for the Pennsylvania Safety Authority. She has also served on the Food and Drug Adminisiration’s Advisory Committee and several committees of the National Institutes of Health.

Dr. McKee holds a bachelor’s degree in psychology from the State University of New York, and a medical degree from Hahnemann Medical College and Hospital in Philadelphia. She completed her residency at Presbyterian Medical Center, and is board certified in internal medicine.

Jesse Bermudez was the co-founder of the Asociación de Músicos Latino Americanos (AMLA), a non-profit multicultural organization that works to promote the development, dissemination and understanding of Latin American music and culture in the region, with a strong emphasis on youth.

A lifelong lover of music, Bermudez set out to learn more about what was going on in the Latino music scene in the US, and particularly in Philadelphia. This led to the creation of AMLA. With its success, the first school of Latin music in Philadelphia was later opened.

A musician, producer, activist and DJ, Bermudez had spent the last 40 years of his career supporting Latino artists, promoting Latin music education and fighting to position salsa on the center stage in Philadelphia.

His dedication to uplifting the Latino music scene and culture in Philadelphia was amplified, when in 2015, Philadelphia City Council introduced a resolution to make July 8, “Jesse Bermudez Day” in the city.

Bermudez unfortunately passed away from an illness on Sept. 13 at the age of 79.

Esther Aguilera is the President and CEO of the Latino Corporate Directors Association (LCDA), where she influences some of the most powerful companies by bringing together accomplished executives at the pinnacle of corporate governance to advance diversity in the boardroom.

A proven leader of over 30 years of experience, Aguilera has displayed tremendous success in executing strategic business plans to drive organizational effectiveness, grow and impact, giving her recognition nationwide as a social entrepreneur and turnaround specialist.

She has worked in leadership positions with the nation’s most accomplished leaders from Corporate America, the US Congress, the executive branch, and the nonprofit sector. Past roles include President & CEO of the Congressional Hispanic Caucus Institute, executive and legislative director of the Congressional Hispanic Caucus (CHC), and policy analyst at the National Council of La Raza.

Aguilera has a bachelor of arts in public policy from Occidental College, completed the Harvard Corporate Governance Executive Program, and leadership programs in Mexico and Spain.

Ana Marie Argilagos is the President and CEO of Hispanics in Philanthropy (HIP), a transnational network of foundations and philanthropists that makes impact investments in the Latino community in the U.S. and across Latin America.

In her role, she guides HIP with its bold vision of ushering in a new generation of philanthropy that is for, by, and about the Latino community.

Under her leadership, HIP has spearheaded rapid responses to the biggest challenges facing Latinos today, including coordinating a regional response to the migration crisis in the U.S. and Central America, supporting Puerto Rico’s long-term recovery from Hurricane Maria, and investing in nonprofits to fight for an inclusive and accurate 2020 Census, among other critical efforts.

Known as an entrepreneurial thinker, Argilagos has a track record of working within and between the philanthropic, public, and nonprofit sectors

Argilagos received her bachelor’s degree in international relations from American University, and a master’s degree in public administration from Harvard University.

These 10 individuals will be celebrated and honored with the 2022 AL DÍA Archetype: Ambassador Manuel Torres Award later this month.

The 2022 AL DÍA Archetype Hispanic Heritage Gala & Awards Ceremony is set for Friday, Sept. 23, 2022 at the Union League of Philadelphia. To reserve your seat at the premier celebration of America's Hispanic Heritage, click here.