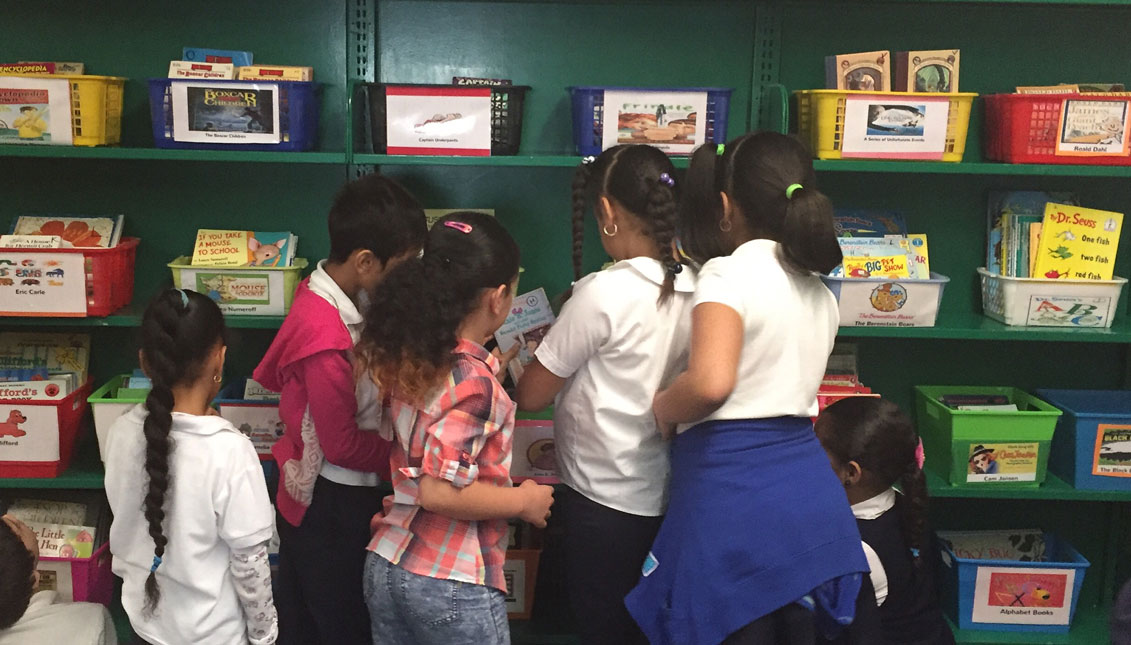 On Monday, Isaac A. Sheppard Elementary celebrated the unveiling of its new renovated school library.

On Monday in North Philadelphia, Isaac A. Sheppard Elementary School celebrated the unveiling of its newly renovated library. The library now features a Spanish-language section, as well as new furniture, and an updated book collection organized by grade and age.

The project was spearheaded by Independence Blue Cross’ associate resource group Latinos con Proposito and Independence “Blue Crew” volunteers. In addition to working on the library, Independence associates led a book collection and volunteered their time to organize the books by student reading level.

“The library here at Sheppard hasn’t been used for 15 years. When I entered the library this year it was just used for storage,” Principal Marisol Rivera Rodriguez said. “There were just tables with boxes upon boxes at the library, so because Independent Blue Cross already had the idea we just worked together to make sure that it happened this year so that our students, staff and community could make use of the space again.”

More than 80 Independence associates and their family members volunteered a combined 250 hours on the project, which began in early April. The library has been sectioned off in different sections, so there is more of a reading room model.

The addition of a Spanish section, Rodriguez said, was decided upon since most of the school’s population is Latino and Spanish is the dominant language. About 35 percent of the students are first time English learners.

“Libraries in general are important to advocate literacy for our students,” Rodriguez said. “It really provides them the space that they need in order to access more books. We’re very fortunate here at Sheppard where most of our teachers have expanded classroom libraries, which is not the case at most of our schools in the city.”

“Building on the relationship we have with Sheppard School, last year some of the folks from Latino Con Proposito had come to me with the idea. Some of them had gone to the school when they were kids and had been involved with different projects and had mentioned to me that the library had basically become a storage area for the school in the basement,”  Juan Lopez, vice president investments and treasury and executive sponsor of Latinos con Proposito said. “Funding for librarians was taken out of budget so without a librarian, a gatekeeper, the school really fell out of use for that space.”

Lopez, together with senior executives from Latinos con Poposito, were able to raise enough money for Sheppard to renew the space.

“The folks that are on the council for the Latino group grew up in that neighborhood and I think people look at North Philadelphia sometimes as a very dangerous place, especially to create hope in a school like that,” Lopez said. “When you look outside the gates of that school you see drug dealers right across the street, it’s a tough environment and so when the kids are here, to give them an opportunity to dream a little but, to look towards the future. That was a really important part for me.”