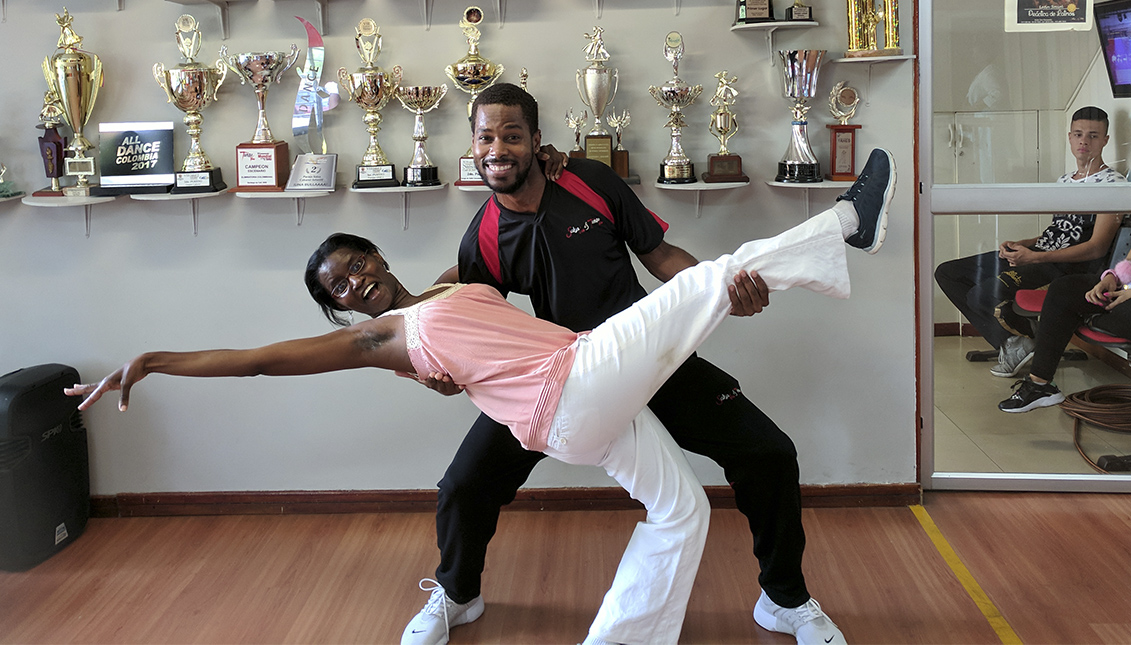 Kim Haas during a salsa class in Cali (Colombia), which will be shown in future episodes of Afro-Latino Travels. Photo: K.H

How many travel programs do you know that are presented by people of color? How many are dedicated to Afro-Latino heritage? This is Kim Haas' great Latin…

The journey is in our DNA, so it is impossible to say whether we are the traveler or the journey itself. One that has lasted billions of years from the African savannahs to Asia and Europe, through fierce struggles and crossbreeding of species, races, cultures. It is in us just as war is in us, but unlike war, travel sparks a fierce empathy because we inevitably recognize another a part of ourselves that joins the puzzle of our identity.

Yet today, as yesterday, we are invaded by the stories of others, a cultural, economic and racial supremacy that people like African-American entrepreneur and traveler Kim Haas combat by making us travel with her to the heart of the Afro-Latino heritage, a collective that remains "invisible" in the United States and Latin America despite its long history and contributions.

"You don't see Afro-Latinos on telenovelas or as reporters, even on Hispanic television programs, and that is heartbreaking. Many of them are what they tell me: 'I feel invisible,' but what I saw when I traveled to Cuba, Brazil or Colombia, to so many places, was my brothers and sisters. They could be. Brown and Black people who look like me and who are writers, dancers or singers," said Kim, whose Afro-Latino Travels began this September on PBS stations across the country.

It's a one-of-a-kind travel program, not only because Haas is going to meet notable Afro-Latinos, such as Costa Rican Epsy Campbell, the first black vice president of Latin America, but also because she is one of the few black hosts on public television and a traveler.

"Ten years ago I had the idea of showing the culture and enormous resilience of Afrolatinxs. At that time I met with many rejections and very little interest, but there has been an evolution in their recognition and many more organizations fighting racism and more politically committed people," said the presenter, for whom movements like Black Live Matters are having a global impact allowing her to continue with a project that is not easy, since each new journey to the heart of the Afro-Latino heritage also represents the constant search for funds to make it possible.

Even more so when you consider, as Kim recalls, that 25% of Latino Americans identify themselves as Afro-Latino and that Latinos are major assets in the tourism industry — they spent $56 billion in 2019 on tourism, she said — but their stories still need to be recognized and celebrated.

"I hope that the social and racial justice movements of 2020 will open the doors for greater representation in the travel media," Kim said.

She inherited the travel bug from her grandmother, just as her love of Latino culture was born when she was seven years old and got to know Acapulco, Mexico. Since then, Haas has lived in Seville, Spain to learn Spanish and traveled throughout Latin America, as well as undertaking projects to promote Afro-Latino culture she feels closely connected to, collaborating with museums, universities and other institutions that focus on Afro-Latino culture and art.

Revelations on the road

Quince Duncan is Costa Rica's first Afro-Caribbean writer and one of the few to write about African heritage and racism in the small country. When Kim met him to record the first episode of Afro-Latino Travels, broadcasted last Saturday in Philadelphia, she was impressed by how little has been written about Afro-Costa Ricans, considering that they are an essential part of the nation's development.

"The Afro-Latinos of Costa Rica built the railroad, which has been crucial to their economy. But no one writes or shares their stories, that's the tragic part. Growing up thinking you haven't contributed anything and not knowing anything about who you are," she said.

The stories continued to accompany her as she went from place to place with the same impression of wonder and also of historical injustice.

"Did you know that percussion, drumming, was forbidden in Havana? That's part of who you are, the music and the rumba, and it was persecuted," said Kim.

But the encounter she's most fond of was meeting Nicelmar Nogueira, the creator of the samba museum and whose family is behind the most iconic Brazilian dance. The meeting happened in Rio de Janeiro last year.

"I met her on the day of Martin Luther King's anniversary and was moved to tears by her story and her commitment to having Afro-Brazilians represented in samba, especially since there was a time when it became very mainstream and they were left behind," said Kim. "It was very emotional, I was talking to a legend."

Often travelers, particularly if they are women, face all kinds of obstacles — "you have to be precautious, but you have to live your life," added Kim, who sometimes travels in groups, but had gone to Brazil alone to meet with Nogueira. As a result, she wanted to "learn more for myself beyond the cliches about bad people and crime," and visited Providencia, the oldest favela in Rio, accompanied by a resident activist.

"I saw the humanity. We have lost sight of people, talent, creativity and resilience even in poverty," she emphasized. "In Providencia I met a woman and her daughter and we connected right away, she offered me what she had, we smiled at each other and I kept thinking that this kind of sensation is lost when you say 'favela,' as if they were not people like us."

"The favelados are having a hard time because of COVID. It's very difficult when you live in a crowded place, but there is a lot of Brazilian culture in those places," concluded Kim.

As the writer Maya Angelou said, "perhaps travel is not enough to prevent intolerance, but if it can show us that all people cry, laugh and die, then you can introduce the idea that if we try to understand each other, we might even become friends". Or, at the very least, we know where we come from so that we know where we WANT to go.