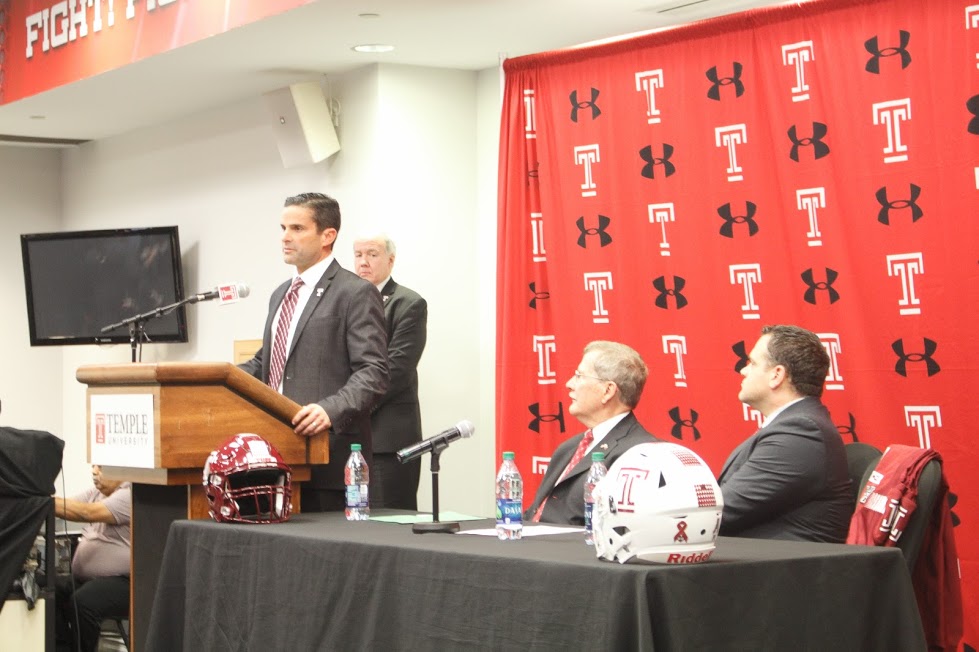 During the press conference, Diaz praised Temple’s history, culture, the city of Philadelphia, his time in previous coaching stints, and more.

Temple University introduced Manny Diaz as the football program’s next head coach during a press conference on Thursday, Dec. 13.

He will be the 28th head coach in Temple football history, and the second the program has introduced in three years.

When detailing the coaching search, Director of Athletics Patrick Kraft said he hired Diaz because he was “the best man for the job.”

“I wanted enthusiasm, I wanted someone who understood Temple TUFF—what that really means,” he continued. “We want a coach who will be respected and loved by his players, and a coach who, most importantly, wanted to be at Temple.”

Diaz fit all the criteria Kraft was looking for, and will join Temple football during one of the most successful stretches of the program’s history.

They are heading to their fourth consecutive bowl game—their longest streak ever—and have been bowl eligible in eight of the last 10 seasons. They’ve also accumulated the best record in the American Athletic Conference during those four years with a 25-7 record.

Diaz said he intends to continue building from the success of previous coaches and continue the winning culture the program has enjoyed in recent years.

As the new coach, he said he wants to make sure that this is a player’s team, where the onus and spotlight remains on them.

“Our job [as a coach] is to properly lead them, to show them the way and take them somewhere they can’t get to on their own.”

Diaz said the four pillars that will define Temple football under his guidance are integrity, passion, toughness, and competitive excellence.

While the idea is to continue the program’s success, the goal is to accomplish something that has never been done before, noting it wouldn’t be easy, but the work would start shortly after the new year.

He will work on putting together the right staff, comprised of people who fit with what the team is trying to do.

“Recruiting at Temple will be the primary driver for how we build our football staff,” he iterated.

Before officially joining the Temple coaching staff, Diaz said he has one more order of business with Miami—coaching the Pinstripe Bowl game on Dec. 27 against Wisconsin.

“I owed it to those kids,” he said. “I just wanted to be with them one last time.”

Temple is set to play against Duke University in the Independence Bowl in Shreveport, Louisiana on the same day, where interim coach Ed Foley will be on the sidelines.