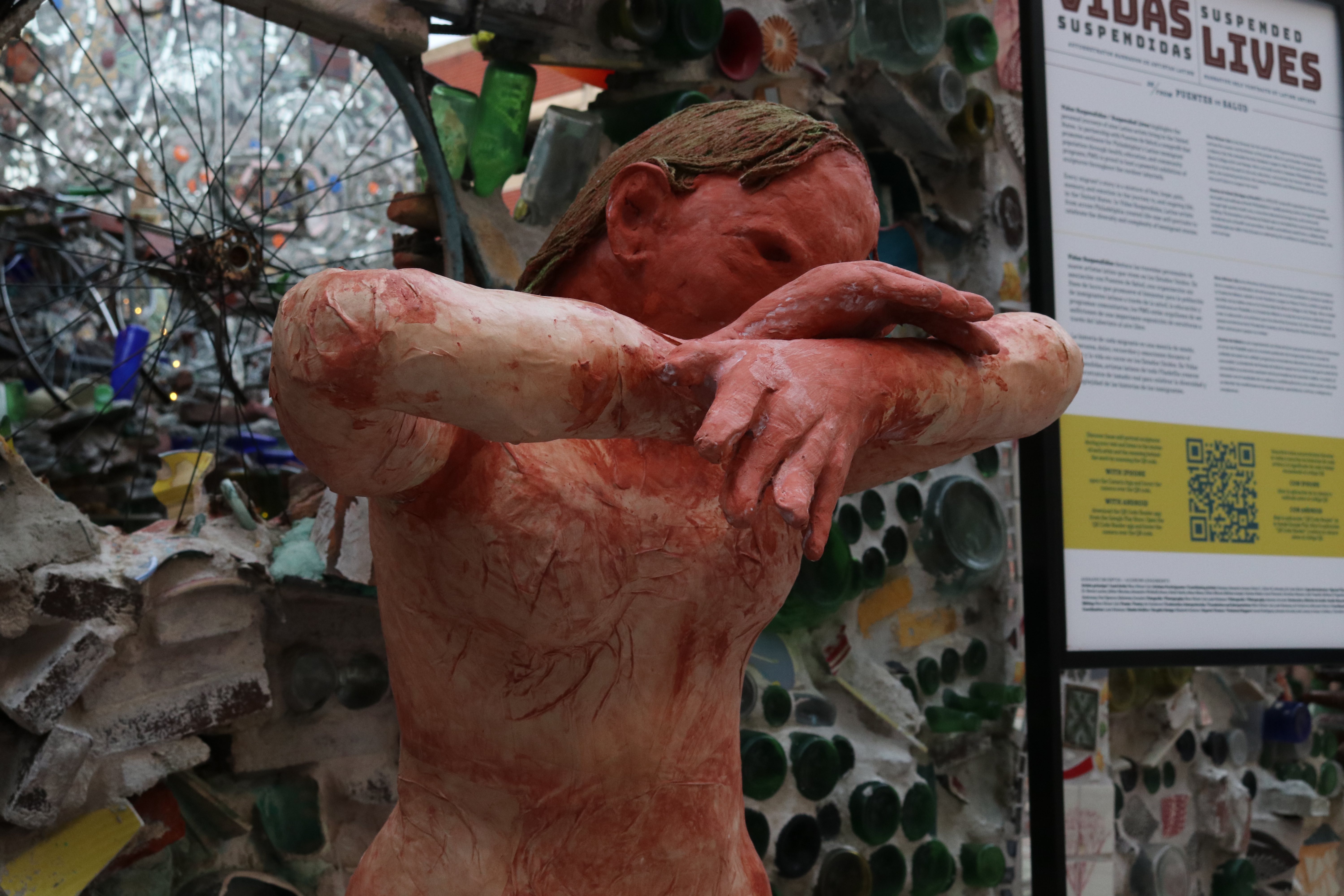 One of the sculptures, by José Lemus, on display as part of the Vidas Suspendidas/Suspended Lives exhibition at Philadelphia's Magic Gardens through Nov. 18. Photo: Emily Neil / AL DÍA News

The three-dimensional self-portraits, displayed as part of the Vidas Suspendidas/Suspended Lives project, narrate the journeys of nine Latinx artists living in…

In the half-light of dusk, the paper-mache figures were more life-like than ever, emerging from the shifting shadows of the outdoor maze of folk art at Philadelphia’s Magic Gardens.

And thanks to some magic, in the form of scannable QR codes linked to audio stories, the sculptures of nine Latinx artists in Philadelphia spoke their stories aloud to those who gathered in the cool fall breeze at the opening reception of Vidas Suspendidas/Suspended Lives on Oct. 11.

In both English and Spanish recordings, the artists each describe their incredible personal journeys that were ultimately manifested in the three-dimensional creation placed on display for the public.

The sculptures are the product of more than a year and a half of work and collaboration led by artist Nora Hiriart Litz, director for art and culture at Puentes de Salud.

Litz said that the project came about when she began to reach out to youth who were affected by President Trump’s move to cancel the DACA program, which has granted many undocumented U.S. residents access to greater opportunities and protections.

She wanted to recognize the holistic identity and experience of these individuals and other immigrants. So Litz, herself a Mexican-American immigrant who has led numerous community-based art projects, invited people to participate with her, both in her own workshop and at Puentes de Salud, the immigrant health and wellness organization located in South Philadelphia.

Together, the group got to know one another, and began collaborating on life-size self portraits that communicated their personal journeys. Side-by-side, they built figures composed of rough and soft textures, strokes of pain and joy — the varied materials of experience and the many roads they have passed through to reach where they are today. 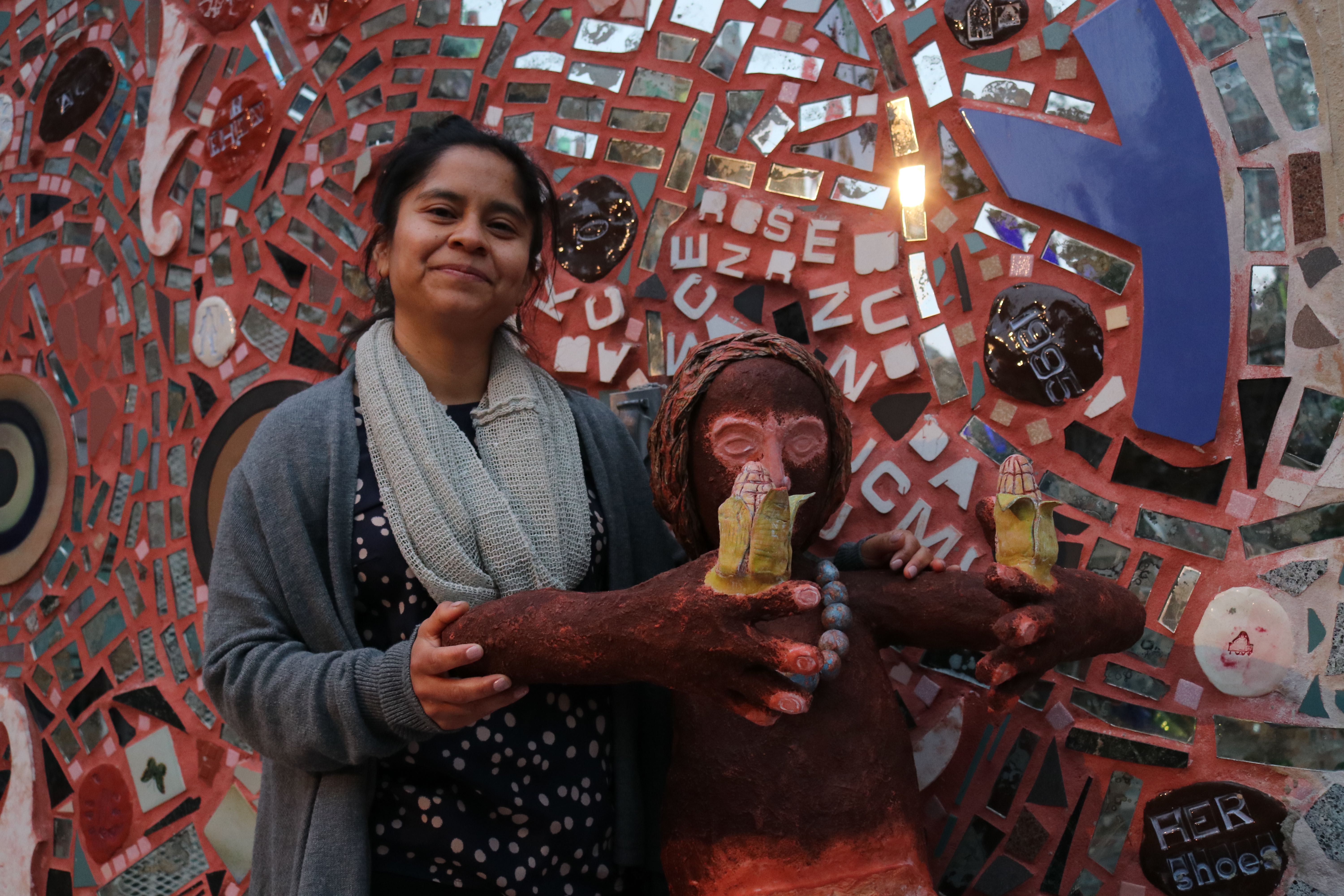 Ivonne, whose last name is withheld for her safety, is one of the artists who participated in the project. For her, the process has been transformative.

“I knew that I had gifts but I didn’t believe I was capable of taking advantage of them,” Ivonne said.

“Thanks to the beautiful team, and Mrs. Litz, she utilized my gifts and she has made me see that I have a great spirit, and that I’m capable of doing whatever I want to do, because art is wonderful in all of its expressions and it opens this heart, and it awakens all of your senses. That is what this project has done,” she said.

Ivonne’s sculpture incorporates different aspects of her identity: as part of her hands, there are elotes, or corn cobs, which embody her upbringing in a family dedicated to farming in Mexico. Outstretched arms express both a desire to embrace, and an inclination to protect, borne of both the love she has for some of her family members, and the pain resulting from the trauma of domestic abuse. A faint tracing of the tree of life symbol on the figure’s stomach represents her role as a mother to her 12-year-old daughter, who has supported Ivonne in her artistic endeavor because she understands how important it is to her mother.

Ivonne said that her hope for those who stand before the sculptures and listen to their stories is that they take with them the knowledge that immigrants “feel, that we are human, [and] that we are people like them, that we also carry our crosses, that we carry our joys,” she said.

“This is unity...and they are also welcome to our new family,” the artist added.

Litz said that the audio stories are a significant element of the project. Though the artists tell of experiences of deportation, trauma, violence, domestic abuse, and other struggles, the embodiment of those stories in the form of the sculptures is a victory in itself: a statement of presence, of being, of witness.

“There’s a kinmanship that comes out of telling your story,” she said. 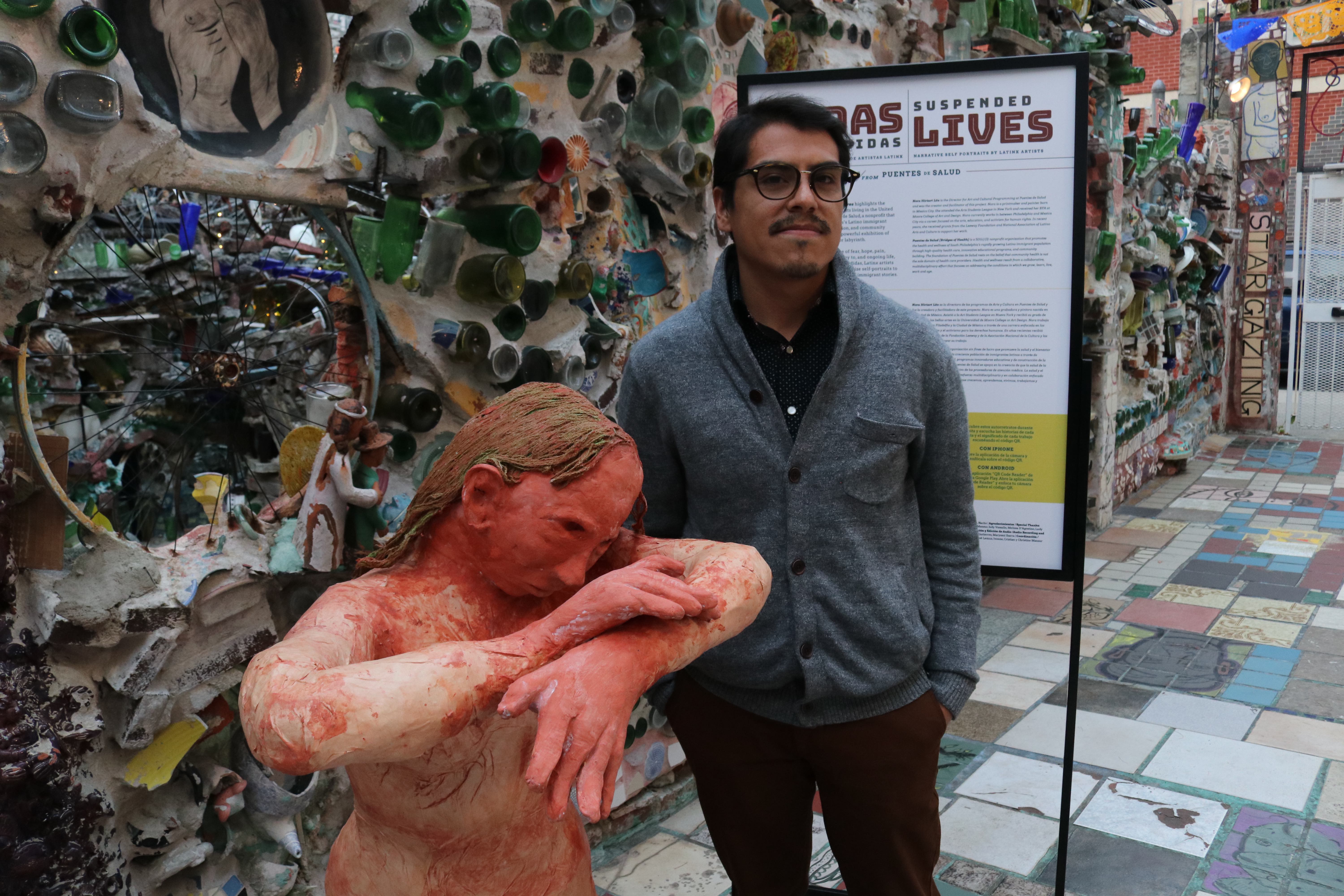 “It’s almost like they became human...and now to have the [sculptures] here, it feels like they belong, in a really strange way. Like they were made to be here,” she added.

José Lemus, who goes by his artist name of Lemus, is another of the artists who participated in Vidas Suspendidas/Suspended Lives. An art student at the Pennsylvania Academy of Fine Arts, Lemus put aside his usual medium of drawing and entered into an artistic process that was unlike any he had done before after meeting Litz and joining the project six months ago.

Lemus created a sculpture of a woman struggling to walk forward, with a young child clinging to her leg. The scene depicts an incident that led to his mother’s deportation when Lemus was four. It is a story that he doesn’t often share, and which his family normally does not discuss — but one that, Lemus said, “needed to be represented.”

“I’m reliving this experience and I’m trying to mold it into a shape...It was a little cathartic because it was held in for a long time,” Lemus said.

Like Ivonne, Lemus wants those who visit the exhibition to be aware of the solidarity that exists in being human, as we all, immigrants and non-immigrants alike, carry with us unspoken stories we hesitate to share, and often try to forget.

“We’re all human, we all have suffered in silence of things that we don’t talk about, and this way we sort of gave it a voice,” Lemus said.

“It...presents this idea that you have baggage or whatever it is, don’t hold it in, just try to create something out of it. Use it as a force instead of something that puts you down,” Lemus said.

Vidas Suspendidas/Suspended Lives is on display at Philadelphia’s Magic Gardens at 1020 South Street through Nov. 18. You can click here to learn more about the exhibition, and visit the Puentes de Salud website to listen to the stories of the artists here.