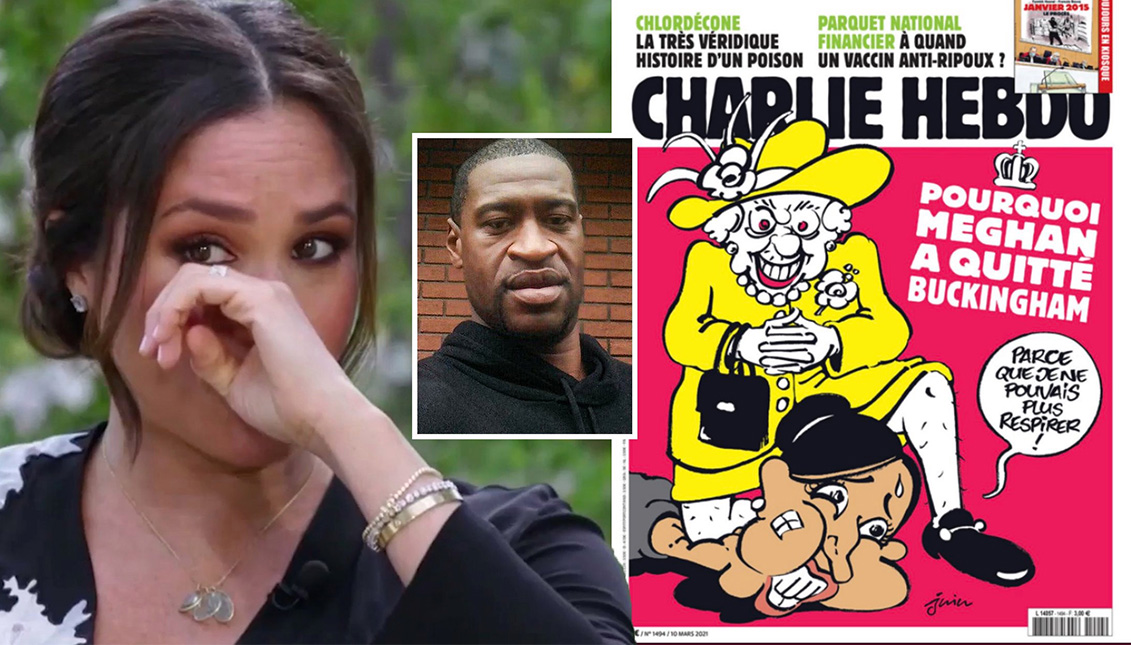 While Britons en masse seem to continue to support their monarchy, people under the age of 25 find themselves much closer to Harry and Meghan than one might think. Why? Photo: Metro

The French satirical weekly magazine takes the racism of the British Royal Family to the center stage after Prince Harry and his wife's interview with Oprah.

An image of Queen Elizabeth II kneeling on Meghan Markle's neck as she pleads: "I can't breathe either" has provoked waves of outrage in the UK and highlighted something infinitely more interesting, that British society is generationally divided. But can Prince Harry's wife really be considered a George Floyd-like figure?

Let's take it one step at a time.

During Harry and his wife's interview, which will go down in the annals of television history, they explained to Oprah that Markle had suffered racism from the British royal family and even had to deal with comments about how dark the couple's son Archie's skin was going to be.

The oppression experienced at Buckingham forced the couple to leave England and emigrate to the United States, they said. While they made it clear that these comments were not made by the Queen or her husband, they did expose a systemic racism that remains hidden, but alive in the UK.

The French weekly Charlie Hebdo has once again done what it does best, causing outrage by defending the right to free speech and putting very thorny issues on the table to provoke debate.

Even if it puts its neck on the line, and sometimes, as in the attack on the editorial staff in 2015 over cartoons of Mohammed, it places its own life at great risk.

On its latest cover, the magazine satirised Meghan's accusations against the royal family by showing that no one is spared from racism, but also by comparing the actress to Floyd, who died at the hands of police and has become a symbol of the fight against racial violence and for social justice around the world.

"This doesn't push boundaries, it doesn't make anyone laugh and it doesn't challenge racism."

"Disgusting," said many, accusing the publication of racism for making a parody of George Floyd. Other users interpreted the knee-jerk as a gesture of sympathy for Markle and a social denunciation.

Halima Begun, executive director of the racial equality group Runnymede Trust, said that the cartoon was "wrong on every level."

"The queen as George Floyd's killer crushing Meghan's neck? Meghan saying she can't breathe? This doesn't push boundaries, it doesn't make anyone laugh and it doesn't challenge racism. It demeans the issues and causes offence across the board," she said on Twitter.

Even Prince William and the Royal Family itself had to come out and openly state that "We are not a racist family" and that they took the Duke and Duchess of Sussex's accusations very seriously.

The culture wars raging in America are starting to hit Europe hard, bringing out what many hide under the doormats — even the royal doormats.

While Britons en masse seem to continue to support their monarchy, people under the age of 25 find themselves much closer to Harry and Meghan than one might think.

Not in the least because the reality of these younger generations, both morally and politically, is light years away from what happens in the House of Lords.

According to a survey conducted in the summer of 2020 by Number Cruncher Politics, 49% of white people say there is "quite a lot" of racism in the country and 14% say there is "a lot." While ethnic minorities, who make up 13% of the population, see it even worse — 55% felt that racism had remained or even worsened over the years.

Another statistic that reveals the country's racist pulse is that nearly one in five Britons believe that "some races or ethnic groups are born less intelligent," according to the European Social Survey.

While the UK is not the most racist country in Europe — some surveys place the Czech Republic and Portugal at the top and others, as in the case of racial harassment, Finland, Luxembourg and Ireland — supremacy is epidemic all over the continent.

"Across the EU, people of African descent face widespread and entrenched prejudice and exclusion. Racial discrimination and harassment are commonplace," says the European Union Agency for Fundamental Rights.

In short, Elizabeth II may not have made any racist remarks about Meghan Markle, nor can the Duchess compare to George Floyd or the lives of ordinary African-Americans constantly threatened by the police. But what Charlie Hebdo has achieved with this explosive cover is to highlight the flaws in the system, how dangerous and utterly unequal it all is.

Racism that litters the streets, that shakes at different levels and that neither kings, nor popes, nor anyone else for that matter, can escape.