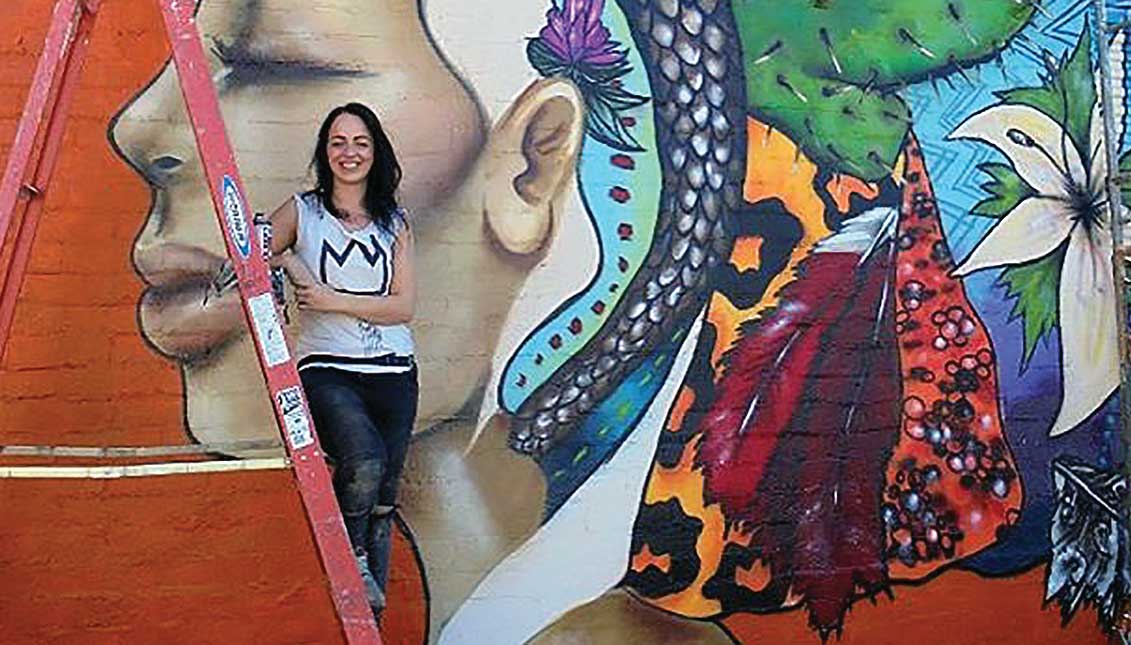 Harriet Wood, "Hazard" is an urban artist who left her work of solidarity embodied in the walls of Ajo, Arizona. Photo supplied.

“No Guacamole For Immigrant Haters”: the experience of a street artist painting the border in Arizona

While hate seems to rise up across the world, the border town Ajo fights for hope through art

Harriet Wood, street artist, lives in Barcelona but travels all around the world with her work. She found herself in Arizona and decided to take part in community integration at the border between the US and Mexico. She organized a crowdfunding herself and was overfunded to travel to Ajo and participate in its Street Art Mural Project. Where Trump supporters shoot the tankards of water that people from Ajo leaves in the desert to save migrants lives, Wood found unity, elegance and support. Crossing the border opened her eyes, which will never see the world the same.

I first heard about the Ajo Street Art Project in September when visiting a friend in Arizona. I try to reach out to the local graffiti/street art scene where-ever I go in the world and I ended up in contact with Michael Schwartz of Tucson Arts Brigade who organised for me to talk about my work in a local gallery space and spray paint a mural in a large storm-drain/ wash in Tucson. He told me about the project in Ajo and I loved the idea, so from then onwards I took part in online meetings as a team of organisers for the project. It became very clear that the funding for the project was becoming less and less, and whilst I couldn't afford to pay my own way there - I knew I didn't want to take from the very small amount of funding that the project was getting. My only option was to create a crowd fundraiser - I felt and feel very passionate about the activities in the border lands of the U.S.A and the issues facing the Native communities in America so I hoped others would see the value in me participating in this and leaving my artwork over there... and they did! The project was over-funded within half the time available for fundraising!

Which political message lays behind the murals during the Ajo Happening?

I believe that public art should evoke a positive reaction and so I made my mural a subtle homage to it's location. The mural is a large, peaceful female character wearing a headdress. The headdress is, of course, a nod to the Native community, Ajo is actually on Native American soil and part of the Tohono O'odham Nation. The reservation is suffering and is being pushed into absolute isolation. The headdress is made up of Arizonan wildlife, creatures and plants that are unique to that part of the world. The female is resting in front of a giant orange/copper circle which represents perhaps the famous, stunning sunsets of the state but also the giant abandoned copper mine that Ajo was built around.

What did you want to transmit with your murals?

The aim of the project was to provide Ajo with artists to occupy and decorate the buildings in such a unique place in the Sonoran Desert. Public artwork in significant and relevant locations as framework for larger national and international dialogue to promote socially engaged practice and community based arts - I wanted this project to be an opportunity for public interaction and community integration and conversation.

Was Ajo one of your best experiences with communities?

I have never witnessed such an amazing sense of community as I did in Ajo Arizona. Ajo was built to be self sufficient but not only that, it was built to be elegant - elegant and admirable, so the workers of the copper mine would be proud of their home. The whole town of Ajo was purpose built for the huge copper mine which ran for over 70 years. The mine closed in 1985 leaving the whole community hopeless. The town is a shining example of what could have been. We drove for hours through harsh, hostile desert - this place is literally in the middle of nowhere - yet it is full of Spanish-Colonial impressive architecture, an abandoned hospital, cut-off railway track, and a gorgeous Plaza. The sense of togetherness in Ajo was a very powerful thing. When Ajo’s mine was open, the town was split into three separate, segregated towns. Ajo, Indian Village and Mexican Town - your typical institutional racism. The community was divided yet the plaza always was the place where everyone mixed and enjoyed community events regardless of their ethnicity or background. This has been built on ever since, with every single person living in or passing through Ajo making a huge effort to help one another, to socialise, to be kind, to appreciate one another and their differences.

I learnt a lot, almost too much to explain. But there were some significant moments that really made me question some of the politics and basic morals within the U.S.A right now. The locals were wearing t-shirts that stated "No Guacamole For Immigrant Haters" and celebrating all things Mexican. I had my own experience when helping a friend load paint and materials into her car, a man approached us and asked politely for water - I have never seen anyone more exhausted in my life - he declined a sip of my friends drink stating he needed to take water to his "very ill" brother - he then told me he was Mexican. We suggested other options to get water and he thanked us and went on his way. The desert is hostile, the wildlife deadly, the heat remorseless and the mountain ranges almost impenetrable yet so many make the journey from Mexico into the United States. The surrounding lands are a memorial to those who tried and succumbed to the perilous conditions. I’m told locals leave water out in the desert, around the town and in places where hopefully those who need it will find it - a contentious issue seen by some as encouraging illegal immigrants to attempt the journey. The general consensus in Ajo is to try to save their lives. I then learnt of local residents placing giant tankards of water in the desert with large flags so hopeful immigrants can drink, these have recently become targets for Trump supporters to shoot at and destroy.

How was it to cross the border in the opposite direction of migrants?

Very eye opening. As you drive from Tucson to Ajo and enter the Tohono O’odham Nation you cross the 100 mile border territory boundary where the road is blocked with U.S Border Force agents. I was ready to get my papers and passport out, when I was told not to worry - you can pass freely into Mexico, it was only the traffic coming out that was getting checked. We passed through Ajo to collect some of the left over aerosols from my mural, I wanted to paint something colourful in Mexico. Why not, I came here to paint! The drive was short from Ajo, its only 43 miles from the official border. The American border town we went to (built specifically for the border station) was Lukeville. We rolled up to very modern, official, militarised lanes operated by very serious, armed Border Force Agents. We were beckoned through, without stopping and slowly crept out of the station. There was a queue of cars waiting to come through the other side about two miles long. As we left Lukeville, Arizona we entered Sonoyta, Mexico just a few metres apart. My first thoughts were that this was a facade, like a fairground. There were shacks along the road side- selling ponchos and sombreros to tourists with stalls in between selling camouflage and trekking supplies to those who wanted to make the journey... there were rusty barrels, corrugated iron roofing, everything was hand painted, the typography on the crumbling structures, the dodgy road markings. The poverty blew my mind, this was literally metres away from America. The area was old, disused and broken. Almost like a ghost town, with a few people sat outside their stalls, the occasional reggaeton blasting out of battered trucks and packs of dogs running wild across the track we were driving on. There was a large bang and a loud squeal. A stray dog had just been run over by a truck heading out. They kept going, I realised looking down the road at the dozens of dogs roaming freely, that this wasn’t an exceptional event at all. We were 5 minutes into Mexico!

How did you feel there?

For the majority of my short time in Mexico I felt a huge sense of privilege - almost to the point of where I felt a little unsafe, a target perhaps. I felt guilty, yet very lucky to be able to experience everything I did. Every conversation I managed to have in Mexico was a positive one, but the area we were travelling around was an unstable one and I was aware of that. The culture is rich and colourful and it felt very unjust to see it be financially abandoned in the way it was. Arizona was magnificent and I made connections that I totally treasure!

How do you think your work can influence the people living both sides of the border?

Will migrants feel less alone or violent? I hope my work can be a reminder of unity and hope. Graffiti and street art is a global passion, where international barriers are constantly overcome - irrelevant even. When Mexican, American, Tohono O'odham natives and international artists create artwork together like we did this year, it inspires hope and urges communities to unify.