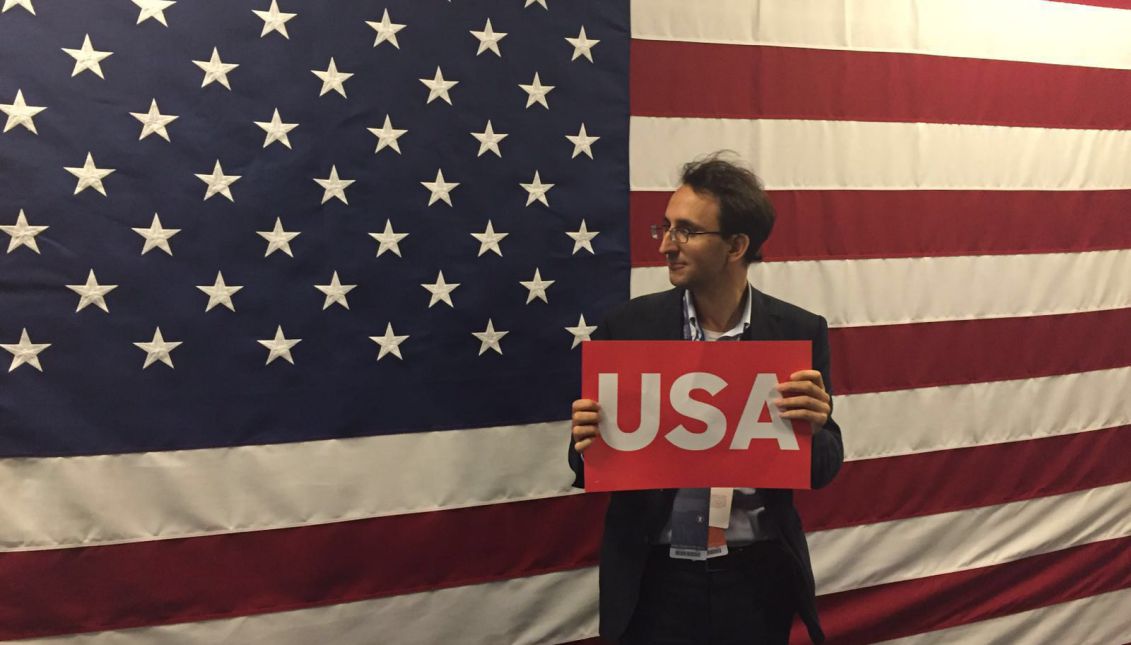 The Spanish journalist Marc Bassets, former chief correspondent of El País in Washington DC, presents a book in which he mixes a journey chronicle and a…

I had the fortune of meeting Marc Bassets in Berlin in 2006 when he was a correspondent for the Spanish newspaper La Vanguardia in Germany, and I still doubted whether or not to be a journalist. To convince me, Bassets gave me two pieces of advice. First: "read the American press, especially the New Yorker" (okay, it took a while until I managed to finish an entire article). Second: "If you can, write books. The articles and reports are ephemeral, but the books are not. "

Eleven years later, Marc Bassets, former correspondent in Brussels, Berlin, New York and Washington - first for La Vanguardia and then for El País - decided to venture into his own advice, and dare with his first book: "American Autumn" (Elba, 2017), a nonfiction essay where the author wanted to make a social portrait of EE. UU after the six years he lived in the country.

"Historically, autumn is usually an intense time in the US, when things happen," explained Bassets during the presentation of his book in Barcelona, on November 21. And his book focuses precisely on two very intense autumns that he had to live as a journalist: the fall of 2008 when, in a country sunk in a total economic crisis, the slogan "Yes, we can" arose, the inspiring campaign of the presidential candidate Barack Obama, whose message was "that the US and the whole world could change," said Bassets, excited. And the fall of 2016, marked by the electoral victory of the Republican candidate Donald Trump. "For the first time, in a multilingual and diverse country like the United States - with states like California, where the proportion of the Hispanic population is about to surpass the white population - someone was doing an openly racist electoral campaign," explained the one who was responsible for the El País delegation in Washington until earlier this year.

Divided into two sections - the Obama era and the Trump’s year in office - "American Autumn" compiles a series of journalistic chronicles in which the author flees from the political record and resorts to newsgathering and the first person travel narrative to explain the American reality. In the "Factories" chapter, for example, Bassets tells of his visit to Indianapolis shortly after the manufacturer of air conditioners Carrier announced that he was moving production to Mexico in February 2016. "Carrier spokesmen didn’t want to talk to me... They sent me a statement justifying the closure decision because the suppliers and competitors had also migrated to Mexico, and for cost reasons. Dawn Martin earned $ 22 an hour; Mexican workers would earn between three and six ... Losing the job could mean, for Martin, running out of health insurance."

"I tried to explain the country not looking at politicians, but at citizens," said Bassets, believing in the fact that the good journalist should try to get out of his usual environment - correspondents usually reside in Washington or New York - to better understand society and, above all, make the effort to get into someone else’s shoes, having empathy with the interviewee. "It is very unhelpful to interview a Trump voter with prejudice. We must try to understand their motives, without ever losing the critical sense," he explains.

Interviewing a wide range of people, from academics in Washington to unemployed workers in the Midwest or the mayor of El Paso, Bassets concludes that, "in the US, the discomfort with the status quo persists. Obama and Trump are very different, but both won by their innovative message. In the USA, the candidates that are associated with the establishment lose," he said.

Unfortunately, candidate Trump based much of his groundbreaking campaign on lies - the so-called "post-truth". "The lie in politics has existed for a long time, but I had never seen a candidate like Trump, lying so blatantly," he said.

For Bassets, the most surprising thing is that all this happens in the US, "a country where lies are especially penalized", both socially and legally. "Trump broke this idea. His voters didn’t care if he lied," he said. "As much as the press tried to fact-check and dismantle his lies, nothing happened. Trump has shown that citizens vote for emotions."

This premise also applies to Obama. "Obama didn’t win either because he had a reasonable economic program, or a foreign policy or specific immigration ideas, but because he captivated them. The votes are moved by emotions. It’s a reality, and it has to be accepted," concluded the journalist.

In first State of the Union, Biden talks Ukraine, the economy, COVID-19 and much more
March 2nd, 2022
Journalists receive the 2021 Nobel Peace Prize for Democracy and Freedom of Expression
December 10th, 2021
Who was Amerigo Vespucci and how did he name an entire continent by mistake?
September 29th, 2021

However, Bassets insists that he avoided making a negative or pessimistic assessment of the US, a country that has shown that history is not linear and that it can surprise us again. “America is a country of extremes, many Obama voters still don’t understand what happened. Although it sounds like a topic, it is a divided country," he said. To make himself understood, he explains the anecdote of his neighbor from Washington DC, who every time they were in the elevator asked for details of his trips. "For her, who had just left Washington and New York, traveling to a small town in Ohio, in the middle of the Midwest, was like traveling to an exotic place," explained Bassets.

"There are reporters who with just a trip of fifteen days to a place they hardly know, have written great chronicles, capable of reaching the essence of a country. But writing a book is much more complicated," said the journalist. "You need a lot of knowledge. Because the longer you stay in a country, the more contradictions you see," he admitted.

The former correspondent of El País also reflects on the fact that American society is marked by its classification into ethnic groups and races - white, Latino, African-American - something that in European countries such as Germany is seen as politically incorrect, due to historical reasons. "In the US and Canada, this is different. These are younger countries, they have no problem recognizing themselves by their origin or ethnicity," Bassets said, convinced that one of the most important phenomena of the 21st century in the US will not be Trump's arrival, but the accelerated demographic change that it’s living:

"We are at a time when whites - the group that has formed the central identity of this nation - begin to be a minority," he said, before adding: "America is a country that assumes its diversity, although there are still contradictions. The fact that a racist president like Trump emerges at a time when whites are becoming a minority, is the white man's reaction when he sees his world ending."