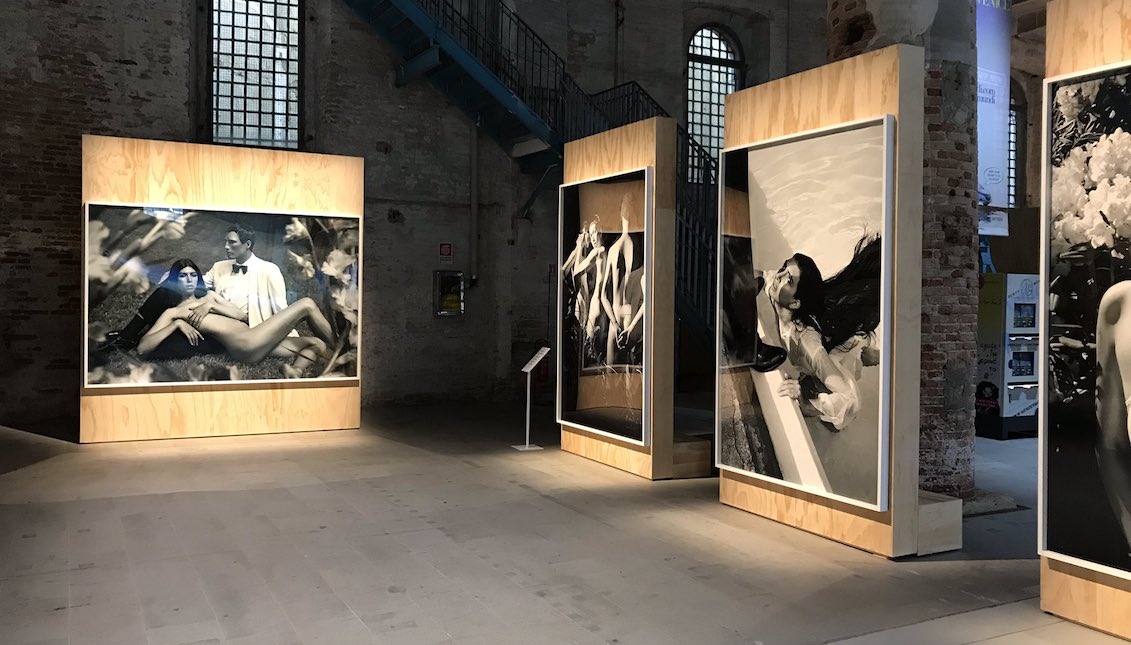 Installation of the work of Martine Gutiérrez, (Berkeley, 1989), in the 58th edition of the Venice Biennial. Photo: Yamily Habib/AL DÍA News.

Between pavilions, alleys, palaces, and a large garden, Venice once again opened the doors to ultimate art, and Latinos filtered the few frontiers to take over…

VENICE.- "Like it or not we live in interesting times," said then-Senator Robert F. Kennedy on a visit to Cape Town in 1966. "They are times of danger and uncertainty, but they are also more open to creative energy of men than any other time in history.”

Little did the senator know how "interesting" the times would be 53 years later.

"May you live in interesting times" is the title of the 58th edition of one of the most important artistic and cultural events in the world, inaugurated last May 11 in the city of Venice.

Called the "Biennale Arte,” it’s the most crucial organization when it comes to exhibiting the contemporary artistic manifestations of the world.

The exhibition was founded in 1985, and it takes place every two years and has gradually incorporated art samples from different countries since the beginning of the 20th century. 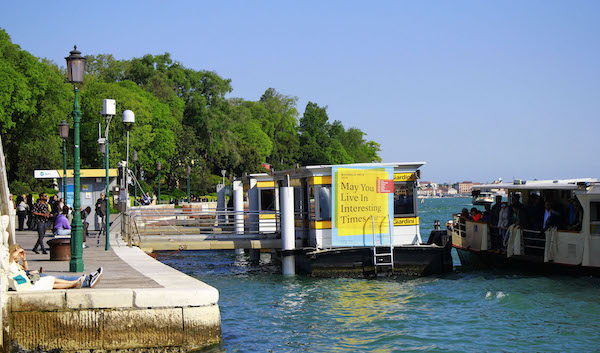 "May you live in interesting times" is the title of the 58th edition of the Venice Biennale. Photo: Yamily Habib / AL DIA News.
Distinction through the avant-garde

Thanks to the great transformation of the spaces, the event has a park divided into 30 pavilions that house samples from each participating country. From the 1980s, the organization allocated a separate area - the Arsenale - for younger artists who were not part of the national collections.

Since its foundation, the event has hosted artists such as Gustav Klimt, Renoir, Courbet, and Picasso, with the firm determination to highlight the works of those who dialogue with the immediate realities of the world.

As the decades have passed, the multiplicity of languages, formats, and media, has allowed the Biennale to spread through all the neighborhoods of the city, mining its streets and canals with fantastic and unexpected samples. 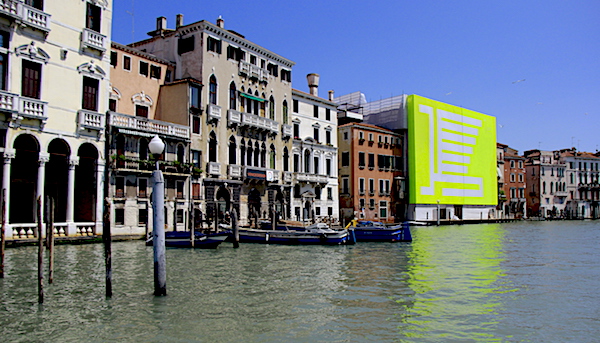 Each pavilion represents, in a fair-like stand, the best of its contemporary artistic production, either through artworks or through the narrative drawn by the curator, professional in charge of creating a discourse with each piece.

In times as "interesting" as these, the reality that each country lives was present in every corner.

Russia’s pavilion, for example, was in charge of Mikhail Piotrovsky, who immerses us in an airtight, cold, dark environment, where the works dialogue with the Parable of the Prodigal Son, and its respective representation by the famous Rembrandt. 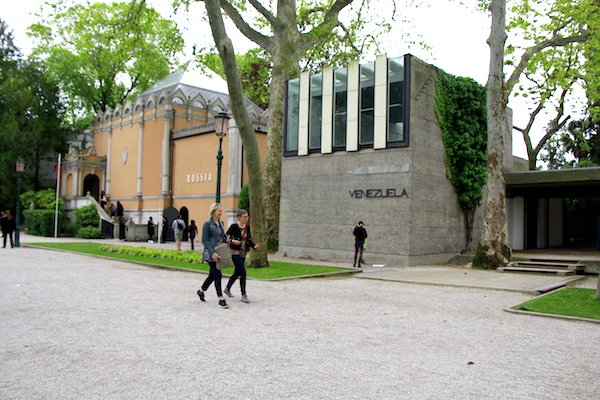 Each piece reminds us of the turmoil, violence, and instability of the contemporary world.

For its part, the United States pavilion, commissioned and curated by Brooke Kamin Rapaport, exhibits the work of Martin Puryear under the title "Liberty/Libertà.”

Puryear said he represented his country "as an artist and as a citizen."

His sculptures dialogue with the concept of freedom and try to manifest a palpable reality on American soil.

However, one of the most interesting phenomena of the entire exhibition was the ubiquity of Hispanic artists.

Although the event has pavilions from Brazil, Uruguay, and Venezuela in the Giardini, the presence of Latino artists is a metaphor in itself.

Artists such as Cubans Alejandro Campins, Arianna Contino, Alex Hernandez, and Eugenio Tibaldi, presented works on the Island of San Servolo, dialoguing with the environmental impact caused by human development. 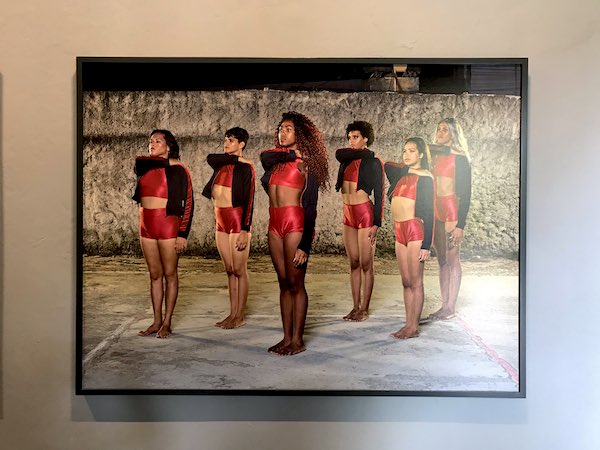 The metaphor of the Hispanic presence in the event was exemplified in the diversity of Latino artists, born and raised in the United States, who took their work to the Biennale walls.

Martine Gutiérrez, for example, is an artist born in 1989 in Berkeley, and whose work entitled Indigenous Woman, brings to light the corporality and the borders between the subject and the object.

Anthony Hernández, born in 1947 in Los Angeles, works from photography on the concept of urban ruin and waste, especially in marginalized areas in the United States.

While it is true that, within the wide variety of artists participating in the event, nationality and residence often do not coincide, the proud representation of the United States by Latino artists is an inevitable nod to the irrefutable reality that the country is experiencing. 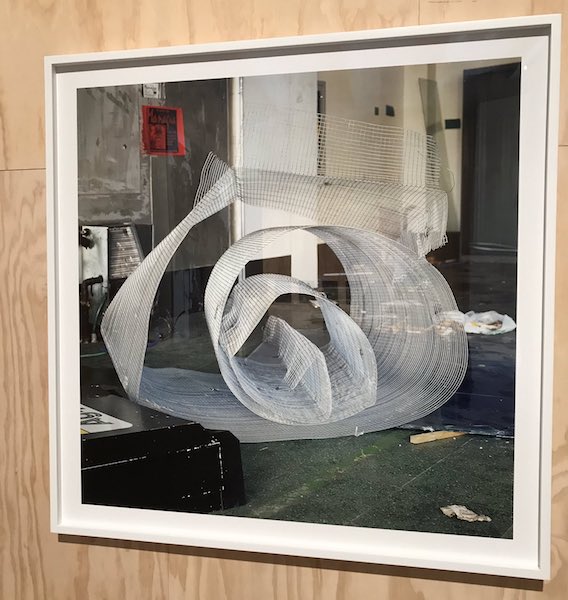