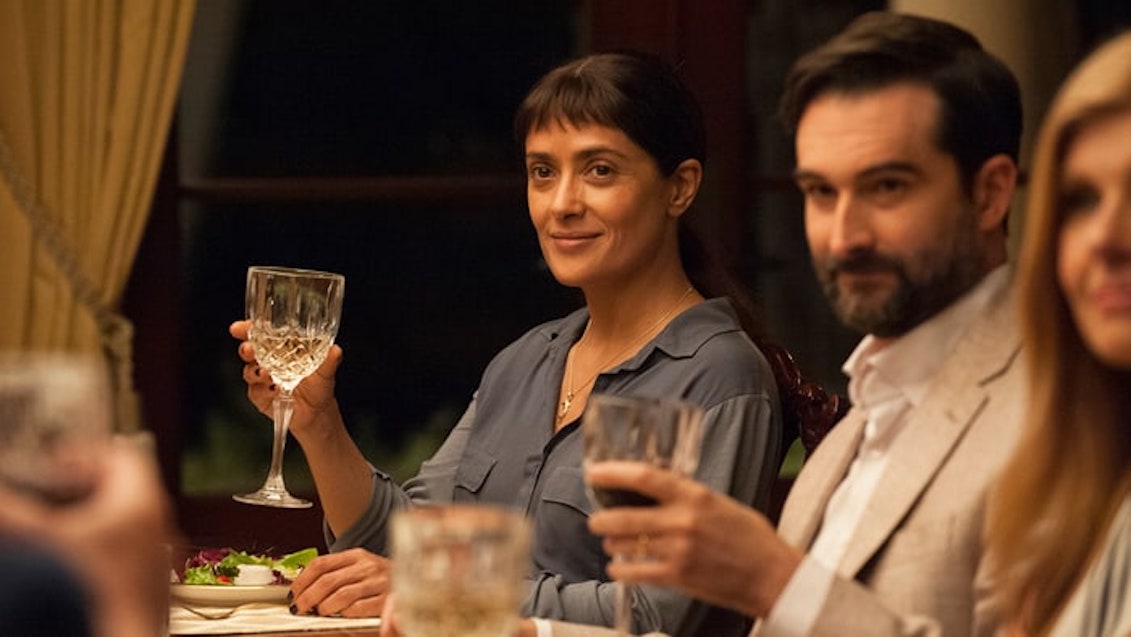 Beatriz at Dinner, directed by Miguel Arteta and starring Salma Hayek, is the best film of the Trump era.

"Beatriz at Dinner": when a movie is worth a hundred headlines

Salma Hayek's last performance, which speaks clearly of the social and cultural reality of the United States in the face of Latin immigration.

I confess that after Traffic and Frida, I did not think that Salma Hayek could surprise again on the big screen. But I was completely wrong.

A few months ago I stumbled upon the trailer for "Beatriz at Dinner" and seeing John Lithgow's face (my dear Dick Solomon), I knew it was something worth watching.

Between onirism and the aftermath of magical realism, Miguel Arteta (The Good Girl, Cedar Rapids) succeeds in directing not only his actors, but also those of us who are hooked from the first frame to a cultural reality that is right in the front yard.

Beatriz (Hayek) is a Mexican massage therapist and healer from Altadena, California, who mixes Western esotericism with Mexican ancestral traditions, and who has a very deep connection with the feel of the earth, animals and nature.

Hayek abandons the stereotype of the Latin bomb to incorporate a humble, unmasked woman who cannot cover her eyes full of sadness and with hair collected in a simple ponytail. With hands always in her pockets and a glass of white wine in her hand, Beatriz becomes a character with which we all feel identified.

One of her clients is Kathy (Connie Britton), a woman with money and whose daughter was very close to Beatriz after being diagnosed with cancer. Beatriz’s car will be damaged at Kathy's after a massage session in a wealthy Newport Beach neighborhood and she will have to stay for a business dinner with the partners of her client’s husband, Grant (David Warshofsky), among whom is Magnate Doug Strutt, known for his real estate company and for the hotels he manages around the world. Does the character sound familiar?

Beatriz must face being confused with a domestic servant, Strutt's verbiage and his passion for hunting, money and class separation. She should even respond if she was legally in the country.

From that moment, the night will slump, between the effervescence of Beatriz’s feelings and the discomfort of her hosts.

Although the film was written before the start of the presidency of Donald Trump, its approach to the hot topics in the United States today, is almost premonitory.

Hayek said in an interview at Sundance London that Beatriz at Dinner poses a problem that "was important 10 years ago and will remain important within 10 years": "I think in the current political climate, not just in The United States, but in the whole world, we see more and more countries divided by philosophies, and this film emerges at the precise moment, because it deals with two points of view that meet by chance, and that fail to communicate," said the actress.

One of the most powerful scenes of the film is the moment in which Strutt flaunts his hunting of wild animals in Africa, showing the photographs and definitely destabilizing Beatriz. Both director Miguel Arteta and screenwriter Mike White have said that the case of Lion Cecil - who died in the hands of a US dentist in Zimbabwe in July 2015 - was one of their inspirations for the film.

This is undoubtedly one of the best film productions of the year, and its coincidence in the American social reality will surely transform it into the most important representation of the Trump era.