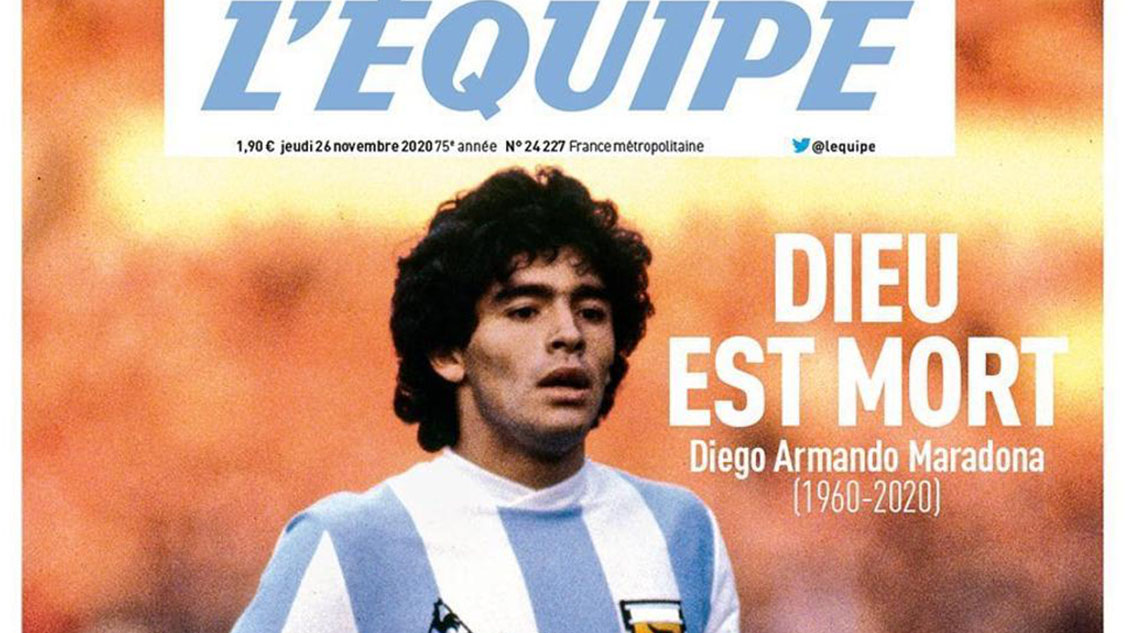 This is how L'Equipe released its paper edition on Thursday.

"God is dead", the nietzschean cover of L'Equipe after the death of Maradona

The Argentinean star was a sensation in the field and the streets, to the point of having a "Maradonian" religion.

The sudden death of Argentine soccer myth Diego Armando Maradona has made headlines worldwide beyond the sports arena. This shows that the controversial sportsman had already crossed the celebrity's barrier to go down in history long before even this last and thunderous goodbye that the fans and the press have given him.

Proof of this is the cover page with sacred and nihilistic airs that the French sports newspaper L'Equipe has dedicated to him, opening its paper section on Thursday with a resounding headline. "God is dead" (Dieu est mort), could be read on the header next to a photo of 'Pelusa' with the Argentine national team shirt.

It is not the first time that L'Equipe dedicates a striking cover to some ball genius to pay homage to him after his death. The same happened in 2016, when the Dutchman Johan Cruyff died and the newspaper headlined "He is the game". As it happened with Maradona, the newspaper opened with an image of the former player and coach of the FC Barcelona proudly wearing the Dutch shirt.

The God of soccer

Such a deification of Maradona is not new – he helped to feed it. Since the 1986 World Cup in Mexico he scored a goal with his hand in the quarterfinals against England and declared at the end of the game: "I didn't touch it (the ball), it was the hand of God."

Then, when Argentina beat Germany by three scores to two in the World Cup final, the myth of Maradona as "anointed" to score was already a fact.

In Argentina, where popular idols have a supernatural relevance, like Evita Perón or 'el Che' Guevara, there is even a "Maradonian" church with more than 50,000 members that considers him God, and whose followers congregated to worship him even before his admission to the hospital and until his death from a heart attack at his home in Tigre, on the outskirts of Buenos Aires.

In fact, and on the occasion of the death of the legend of songs, documentaries, and even seminars and studies, the house of the Argentine government, La Casa Rosada, announced it would host his wake.

In an interview conducted by the Argentine journalist Daniel Arcucci to Maradona, with whom he would have a professional and personal relationship, the star told him this about his condition as "God of soccer":

"If I have managed to be a living myth, I did not set out to be one. I am very grateful to you for the myth, but I am a human being like anyone else. Just because I've won some soccer battles or because I defend people the way I want to defend them, I don't believe in a myth. But I thank them! Do you know what happens? That here, for the Argentines, if you die, you are a phenomenon, but I am not going to give them the pleasure! I don't have to die to win a general consensus!"