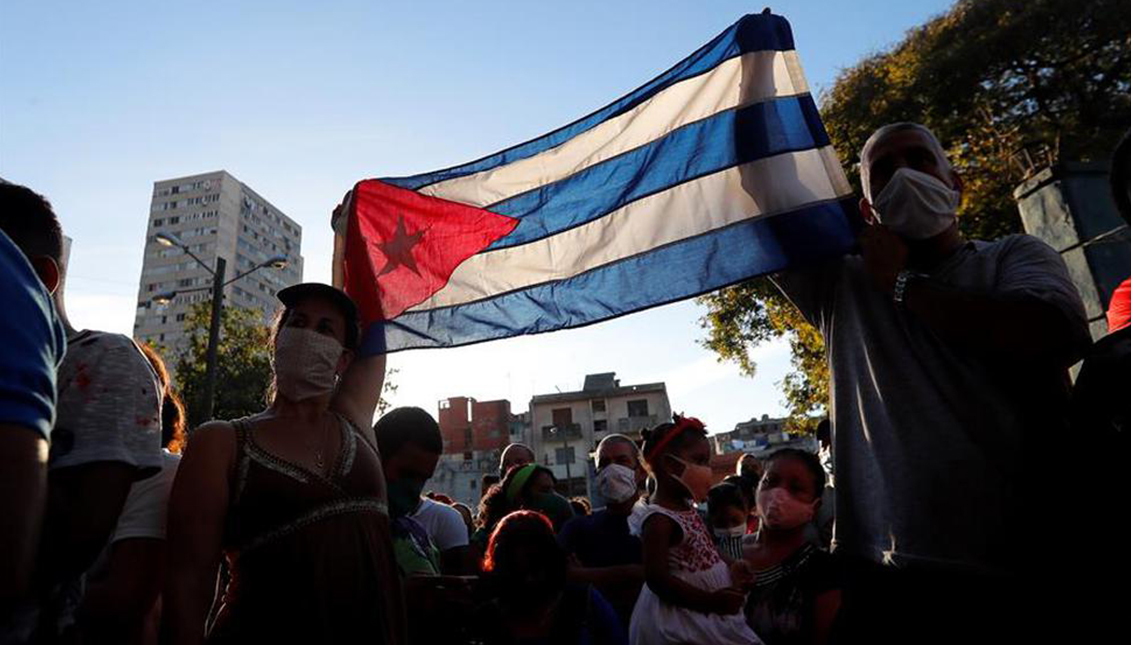 The San Isidro Movement was created to defend the rights of artists on Cuba. Photo: Comercio Perú

"An imperialist reality show." That is how the president described last weekend's protests on Cuban television.

The illusion of hundreds of demonstrators that gathered in front of the doors of the Ministry of Culture in Havana for the beginning of an era of greater artistic and intellectual freedom in Cuba lasted only one day. There was but a glimpse after Vice Minister Fernando Rojas met with some 30 members of the San Isidro Movement to promise them a bridge to "dialogue."

According to NBC, the Cuban government could have burned the bridge by launching an arsenal of television attacks on the protesters on Sunday, calling them a "farce" and an "imperialist reality show" orchestrated by the United States.

During a demonstration by regime supporters, Cuban President Miguel Díaz-Canel declared that there was an "unconventional strategic war to destroy the revolution," using the warmongering language that has brought more than a few headaches to Cubans longing for change that hasn't come close to materializing.

Although a meeting between the artists and the Minister of Culture is still scheduled for tomorrow, Dec. 3, the artist and activist Tania Bruguera, who attended the meeting with politicians on Saturday, has declared that the Ministry of Culture has ceased to be an interlocutor because "it has violated the agreements made at the meeting." Bruguera also asked Díaz-Canel to lead the talks, something that according to the president's speech seems risky.

"In this moment of crisis, we need an interlocutor with real power of decision," said the activist

Meanwhile, as NBC noted, artists like playwright Yunior Garcia are still hopeful about the end of these talks. "Dialogue is the most sensible thing to do to prevent something worse from happening," he concluded, rejecting violence altogether.

After weeks of rioting in the streets and arrests of artists and activists, such as rapper Denis Solis, who was sentenced to eight months in prison for contempt, the eviction of a group of members of the San Isidro Movement last Friday led to a surprising demonstration that brought together artists, renowned intellectuals and ordinary citizens tired of repression in front of the Cuban Ministry of Culture.

In an unusual turn of events, Fernando Rojas announced that he was going to make a pact with the dissidents and called them to a meeting the next day from which both parties came out with what seemed to be promising agreements to closely examine the convictions of several artists — some in a very deteriorated state of health — and also a commitment that the harassment and arrests would stop.

But the Cuban regime appears to be internally divided. Dialogue and the continuation of meetings is the hope of a majority, but there is nothing good about it if officials internally and publicly go back on their word.

That's especially as Cuba is going through a very hard period of product shortages because of the pandemic and sanctions from the Trump administration. However, the President not stopped at discrediting the demonstrators, but also called the San Isidro Movement "mercenaries" and "Trumpists" linked to the United States and the sanctions being levelled against the island.

"They had on their agenda that before the end of the year, the revolutions in Cuba, Nicaragua and Venezuela have to fall," said Díaz-Canel.

U.S. Assistant Secretary of State Michael Kozak, for his part, wrote Monday that "legitimate governments do not fear dialogue with their own people. The Cuban regime is afraid to honor the agreements it made last week with artists and figures of Cuban culture, since that would recognize their right to express themselves."

Joe Biden's prospective national security advisor, Jack Sullivan, also used Twitter to declare that "we support the Cuban people in their struggle for freedom and echo the calls for the Cuban government to release peaceful protesters. The Cuban people must be allowed to exercise the universal right to freedom of expression."