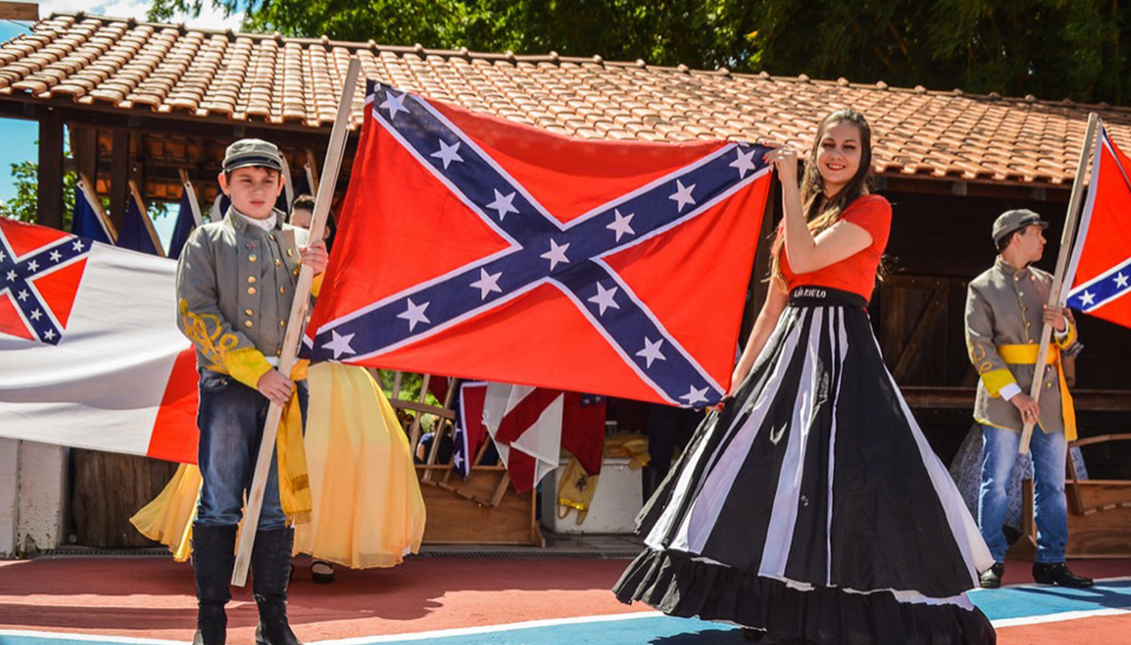 In some regions of the country, the ghost of American Southern slavery is still celebrated with french fries and loud music.

A Confederate flag flutters in the thick, humid heat as a very young soldier dressed in a uniform from a battle fought more than two centuries ago proudly holds the handle. There are also bikers with their leather vests and wads of dollar bills that read "Confederate States of America." And dancers, and fried chicken and cookie vendors, all in a cemetery setting.

No, we are not talking about a historical reenactment staged somewhere in Texas, Georgia, or Alabama, but in Brazil's very heart. In Santa Bárbara d' Oeste, in Sao Paulo, where every spring the so-called Festa Confederada is celebrated.

At this weird event, former Southerners' descendants pay their own particular tribute to their slave-owning ancestors. Believe it or not, Brazil is one of the countries with the largest number of relatives of those Confederates who, after the Civil War ended in 1865, deserted and left in search of new lands where they could continue to maintain their way of life once slavery was abolished in the United States.

By 1867, thousands of Confederates went into exile in regions such as San Barbara or Americana to avoid possible reprisals from the Northerners and because the southern economy, based on the exploitation of people in the cotton fields, had been destroyed.

Although some of these Southerners had chosen to emigrate to New Virginia (Mexico), Spanish Cuba, Venezuela, British Honduras, or Egypt, Brazil had been a traditional ally of the Confederacy and, above all, continued to defend slavery.

Moreover, the Brazilian plantation system of monoculture sugar, rice, and later coffee worked very similarly to that used in the Confederacy.

They were also encouraged by the fact that Pedro I, Emperor of Brazil and first head of state after the country's independence from Portugal was proclaimed, offered land, tax exemption, and travel expenses to all exiles who helped introduce cotton plantation.

Ignoring Southern authorities' pleas to stay in the United States, these landless and slave-less families sought their fortune in the "other" South.

And they did quite well, given that by the mid-19th century, the Brazilian abolitionist movement was barely an idea. Around twenty thousand white people like corn - some of them accompanied by their African-American slaves or freedmen attached to their owners - left the states of South Carolina, Mississippi, or Texas and established over the course of two decades a half dozen settlements in Brazil.

But some of them ended up returning to the United States in the 1870s when Jim Crow laws imposing racial segregation were enacted and would remain in force until well into the 1960s with the Civil Rights Act - although, in some states, they lasted much longer.

Today, these confederates' weight can still be mapped in the regions of Rio de Janeiro and Sao Paulo, especially in Santa Barbara and Americana.

In the first one, founded around a sugar plantation, former Alabama Senator William Hutchinson Norris and some thirty families settled there - Santa Barbara was known as "Colonia Norris."

Regarding Americana, and as published by Jorge Alvarez in an article for La Brújula Verde, it was bought from a Brazilian military and large landowner by Norris himself as an extension of Santa Barbara, and there the Confederates continued to practice their slave lifestyle and introduced cotton cultivation and Protestantism in the community.

Eventually, the Confederates had no choice but to adapt to the changes that were necessarily coming to Brazil, the last Western country to abolish slavery in 1888.

Brazil had been a traditional ally of the Confederacy and, above all, continued to defend slavery.

They substituted English for Portuguese, accepted local laws, and had to integrate or leave now that their former slaves were legal workers or even owners.

Many of them moved to the cities, where it mattered little what they had been before. Their jobs in the agricultural sector were gradually filled by Italians and Germans who married Confederates - who in turn had been marrying Brazilians.

Today the Festa Confederada, as Montana Ray recalls for Point Magazine, is neither a cultural oddity nor a misinterpretation of American style:

“The story of the festa goes much deeper to the heart of Brazil’s own planter-settler history. The party is an example of how family reunions—pretty little girls photographed for family albums—can reveal networks of racial capitalism that stretch across the Americas”, the journalist concluded.