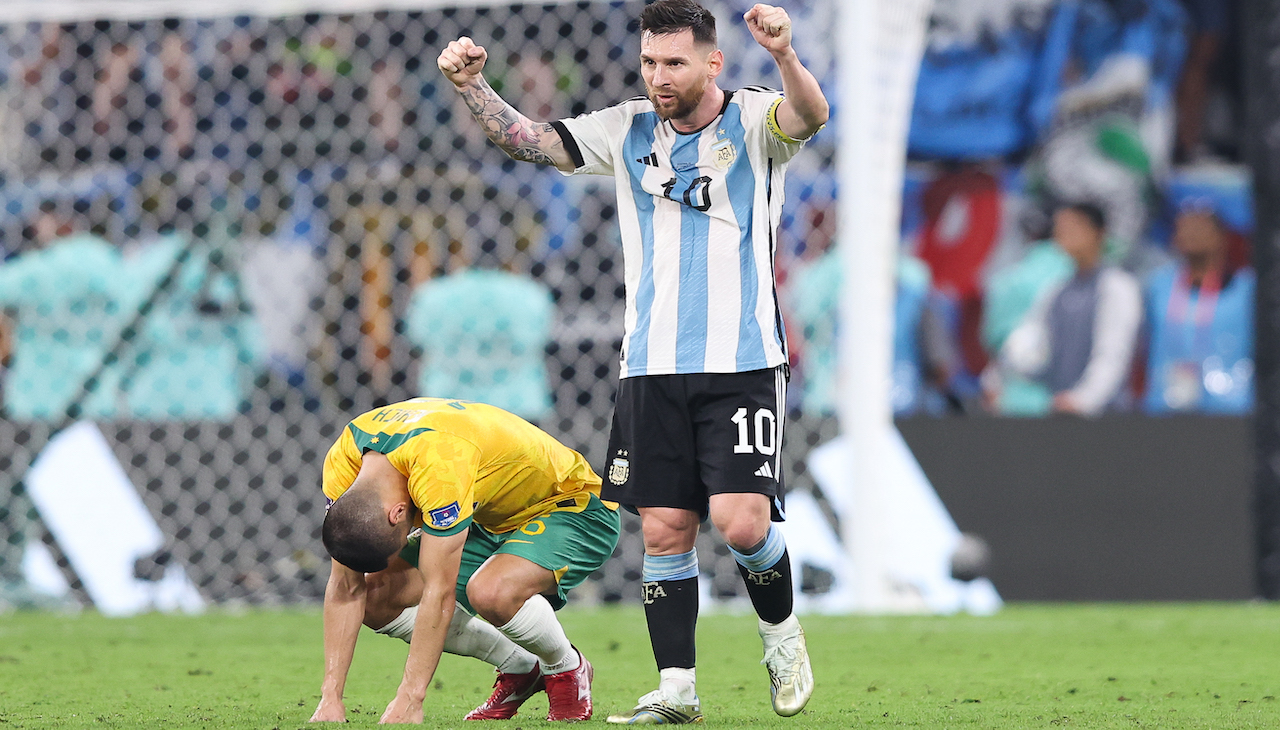 King Leo scores in his 1000th game, takes Argentina to the semi-finals

Messi scored his ninth career World Cup goal, surpassing Diego Maradona as he takes his country closer to the final.

Despite a stout defensive start — and an inspired comeback — for a scrappy and hard-nosed Australia team, Lionel Messi and Argentina were able to open the field up off some Aussie mistakes, defeating them 2-1 to advance to the semi-finals, where a talented Dutch side awaits them.

Messi is looking to take his nation back to the World Cup final after losing out on the trophy in heartbreaking fashion to Germany back in 2014.

Argentina made limited changes to their side in the fixture, with the big name off the line-up sheet being World Cup veteran and Juventus player Ángel Di María, a mainstay of this Argentine side since he first made his national debut back in 2008.

He hurt his thigh against Poland in the team’s last match and Papu Gómez replaced him upfront alongside Manchester City star Julián Álvarez, who kept his place after scoring in the last match, and netting another tonight.

Australia never had the quality to equally match-up against the Argentines, but their fight and grit was a clear advantage, specifically when it came to height. The tallest player on the field and the tallest outfield player in the tournament was Australian defender Harry Souttar, listed at 6 feet 6 inches.

Argentina played a great first half, as they were patient in their offensive buildup and they preferred to wait for the passing lanes to open up for them. Messi was dropping back into deep areas as he usually does, looking to get on the ball more upfield and then dictate play himself or drive it against defenders and strain a defense that did not want to face the King in his 1000th game.

A little more than five minutes after the half hour mark, Messi and Argentina found the breakthrough. They were the superior team throughout the game and it was Messi who got it on his left foot.

After getting the ball back after a well deflected free kick, Messi got the ball back in his sweet spot from a teammate on the right side and he wrapped his left foot around the ball through a defender's leg into the far corner of the goal.

In his fifth World Cup tournament, it was his first goal to come in the knockout stage. It was also his ninth career goal at this tournament, surpassing his former Argentina manager and legend of the game, Diego Maradona, who delivered the trophy for his nation back in 1986, including two famous goals heard around the world against England in that tournament, one of which was the “Hand of God” goal.

The Aussie’s looked startled to be down as their front line had not generated any danger against the Argentine defense. They knew coming into this game they would have to somehow keep a clean sheet in order to have any chance of winning whether getting a goal somehow or through a penalty shoot out after 120 minutes of play.

The second half got worse for them as they still were not much of a presence with the exception of a few hard hitting tackles. A little more than 10 minutes after the second half kicked off, things really got bad, specifically for Aussie keeper Mathew Ryan.

After throwing the ball to his fullback on his left, he received the ball back in front of his own Aussie goal with Rodrigo De Paul sprinting back to press and rather than clearing it away, he attempted to keep at it feet, but his touch was terrible and Álvarez recovered it and easily kicked it home into the empty net.

For the rest of the time, it was Argentina who was running around the field looking for more — and they found themselves losing a goal. Twenty minutes later in the 77th minute, Australia got a goal back off of a deflection from a shot from Craig Goodwin.

It was a lucky strike that gave Argentina and their fans something to worry about with a little more than 10 minutes to go. The goal though would be counted as an own goal against Enzo Fernandez.

The goal gave the Aussie’s a huge spark of hope as they came to life in their attack, but Argentina kept their offensive pressure up as well. Despite some good chances, Australia were unable to get the equalizer to force extra time.

Despite the loss, it will be considered a great tournament for Australia, who have consistently performed better at the World Cup for the better part of a decade. There are some sparks of talent on the team that will surely be back in the mix in 2026. For the fans back home, it was an exciting run to watch their side reach the Round of 16 and face off against one of the best to lace them up.

For Argentina, their run and mission to the final continues as they will take on their toughest opponent up to this point in the tournament in the Netherlands next Friday, Dec. 9.