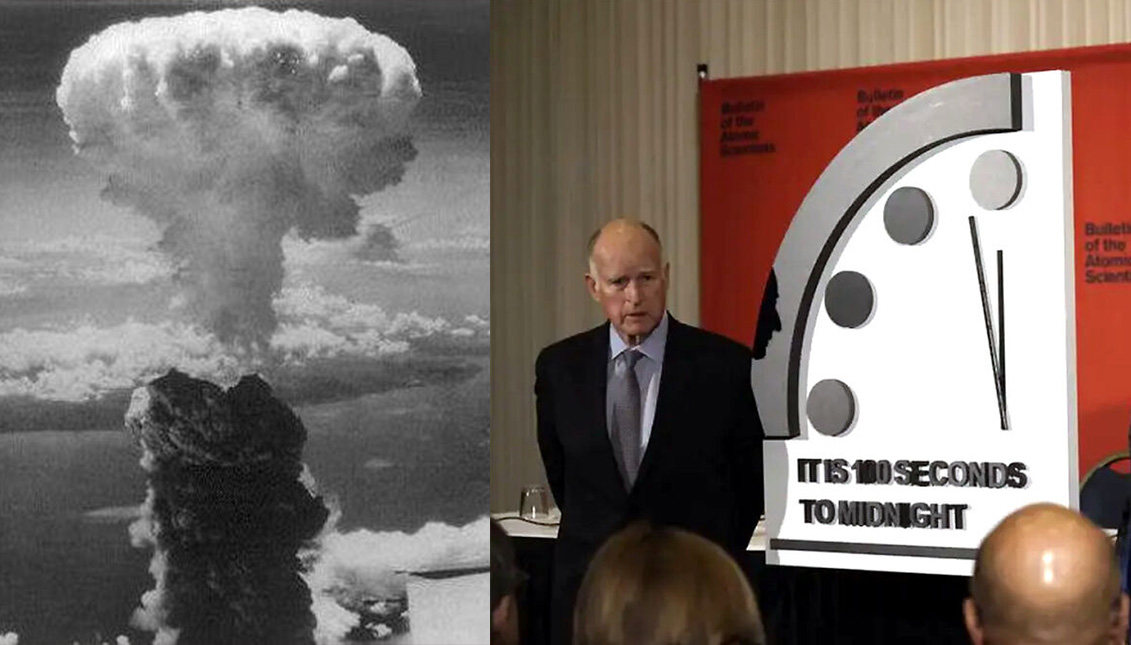 Jerry Brown presenting the new calculation for the End of the World Clock. Photo: AP

It has been 75 years since the U.S. bombing of Hiroshima, and there are still more than 14,000 nuclear bombs in the world, tens of times more powerful. We…

Sometimes there are creepy coincidences. The images of Tuesday's explosion in Beirut and the huge mushroom cloud of smoke produced made many people think of a nuclear bomb like those dropped on Hiroshima and Nagasaki on Aug. 6 and 9, 1945.

The same governor of the Lebanese capital, Marwan Abbaoud, made the comparison between tears when the death toll had not yet been counted, which now stands at around 100 dead and more than 4,000 injured, many of them seriously.

"There was a fire, (the firemen) came to put it out, then the explosion happened and they disappeared, we are looking for them," Abbaoud told CNN. "It looks like what happened in Japan, in Hiroshima and Nagasaki. That's what it reminds me of. I've never seen destruction on this scale in my life."

The tragedy in Lebanon, a country that is going through very difficult times with power cuts for more than 20 hours a day, political corruption and huge social upheaval, was not caused by a bomb, but the apparent blast of explosive material seized and stored at the port, although the causes are still being investigated.

However, when it comes to the 75th anniversary of the American attack on Hiroshima, it was a nuclear disaster in the minds of many. Inevitably, a part of all of us hears the ticking of the symbolic clock of the Apocalypse and the victims of the nuclear horror in Japan, who are combing more than a few gray hairs at this pont, keep asking us not to forget.

"The horror of a nuclear explosion may seem like a distant story, but the danger of atomic weapons being used again is high."

We are also urged to do so by the International Committee of the Red Cross (ICRC), which warned this week that the risk of nuclear weapons being used "has risen to levels not seen since the end of the Cold War," as some of countries with nuclear weapons have at times threatened to use them and agreements to eliminate atomic arsenals are at a standstill.

"The horror of a nuclear explosion may seem like a distant memory, but the danger of atomic weapons being used again is high," said ICRC president Peter Maurer, who pointed out there are still more than 14,000 atomic bombs in the world and many of them are dozens of times more deadly than those dropped on Hiroshima and Nagasaki, which killed 110,000 people in a flash — radiation wiped out 340,000 more in the years that followed.

"Weapons with such catastrophic humanitarian consequences should never be seen as instruments of security," Maurer concluded.

Terumi Tanaka was 13 years old when the bomb hit Nagasaki, three days after it hit Hiroshima. Now, at 88, he is a "hibakusha", a nuclear bomb victim. Like many survivors, Terumi has dedicated his life to sharing his testimony so that what happened will not be forgotten and nuclear weapons will be banned, but only 136,7000 'hibakushas' are still alive — most are in their 80s and the majority were in their mother's womb when the tragedy occurred.

Now it is more urgent than ever that their experiences are collected and taken into account, say these survivors and activists, because forgetting is the first step in repeating a mistake, and there are mistakes for which there is no turning back.

"In the end, we will all die," the old man told AFP. "We organized a group called the 'No More Hibakusha Project,' which works to keep records as archives, including what we have written... so that (the next generation) can use them in their campaigns.

Jiro Hamasumi, 74, was not a direct witness to the fall of Little Boy, the terrible and euphemistic nickname for the Hiroshima atomic bomb, but did suffer from its effects. Jiro's father died almost instantly and so did other family members, and she has managed to reconstruct that blinding flash that others saw and the blast's thunder through her brothers who, when they went to fetch her father at the office, were only able to rescue one buckle from his belt. "The heat and smell of burning flesh" repelled them, Jiro recalled. She was lucky, the radiation didn't cause her malformations or any other kind of scars, but like the rest of the 'hibakushas,' she wants the United States to apologize for what happened and commit to nuclear abolition.

"We are not seeking revenge," she insisted.

Remembering Hiroshima 75 years later
August 4th, 2020
How the U.S. government prepares for nuclear Armageddon
June 18th, 2018
Who is John Bolton and why should we worry?
March 23rd, 2018
The midnight of the world

Earlier this year, the scientists who created the Doomsday Clock, a symbolic marker that shows the minutes we have left until the end of the world, decided to move it forward 20 seconds. We are now 100 seconds away from doomsday.

This was reported at the end of January by Rachel Bronson, president of the Bulletin of Atomic Scientists in which 13 Nobel Prize winners are participating to 'move' the hands.

Bronson warned as early as 2019 that humanity is experiencing a "perfect storm" with two key dangers: climate change, which was included as a threat in 2007, and nuclear war.

"We seem to be normalizing a very dangerous world", she stated.

The report issued by the experts announced that "in the face of this daunting threat scenario and the new tendency of political leaders to reject negotiations and institutions that can protect civilization in the long term, the Bulletin today moves the Doomsday Clock twenty seconds closer to midnight, closer to the apocalypse than ever before."

Russia and the United States are the nations with 90% of the world's nuclear warheads, according to SIPRI.

"In doing so, the board members explicitly warn leaders and citizens around the world that the international security situation is now more dangerous than ever, even at the height of the Cold War," it continued.

While there are 600 fewer nuclear weapons in existence than in 2018, when the hands were pointed at 23:58, only two minutes from the end of the world, they are increasingly sophisticated and spread among very few countries.

The idyllic scenario of 1991, when Bush Sr. and Gorbachev signed the Strategic Arms Reduction Treaty, is far away. Nuclear disarmament was still possible and we were 17 minutes away from the end.