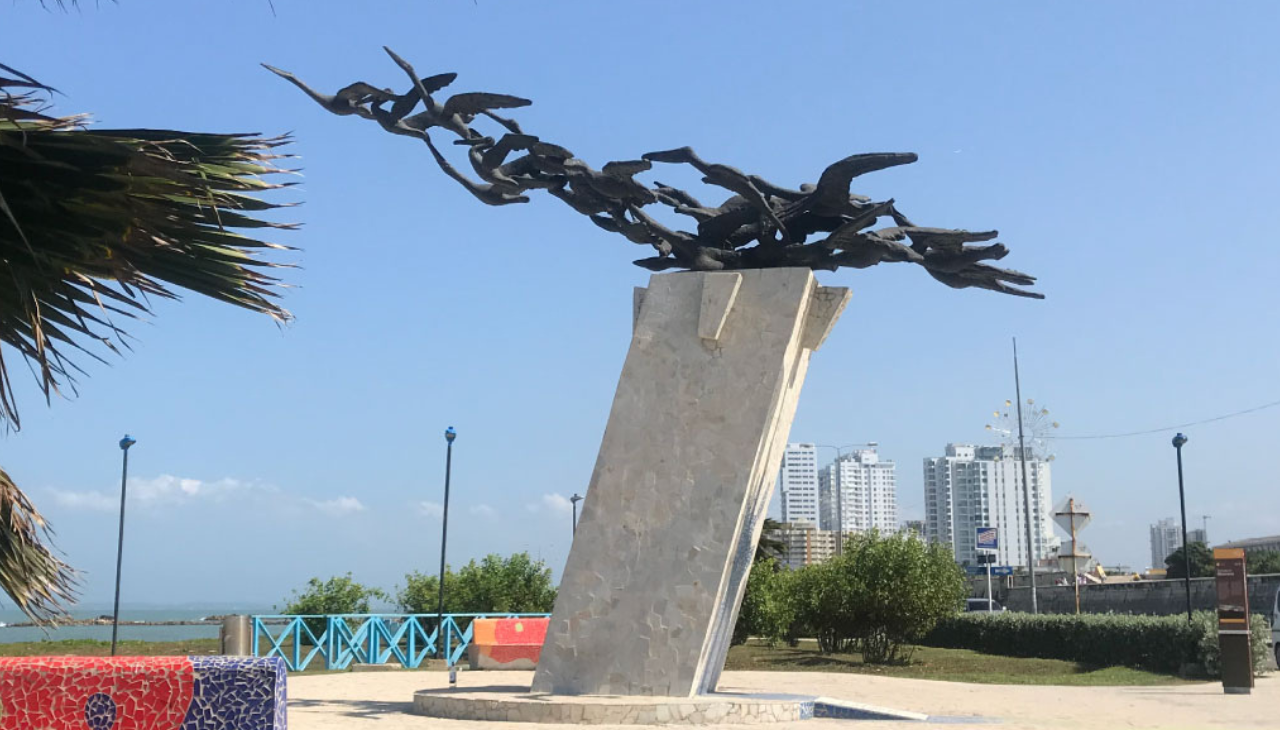 The Gannet Monument is a sculpture that honors these animals in the city. Photo: VivaCartagena

Why is the gannet the bird of Cartagena?

The gannet is one of the most common birds found in Cartagena, which is why it has been made into a poem and has its own sculpture.

In the vicinity of the Historic Center of Cartagena de Indias is a monument to the Gannets of Cartagena, a sculpture made by Eladio Gil Zambrana and installed in 1974, is in honor of Daniel Lemaitre Tono on behalf of the civic movement Facts and Not Words.

The Gannets were chosen as the representative figure of the monument due to the poem "El Alcatraz" (the gannet) by Daniel Lemaitre, which was inspired by these representative birds of the city that can be found near the coasts.

Lemaitre's poem is written on a plaque located on one of the sides of the pedestal of this work of art located on Santander Avenue, which receives hundreds of tourists who come to the city and receive a first impression of the Caribbean Sea with the gannets submerging in its waters.

The work of art

The work rests on a tall rectangular pedestal leaning to one side in coral stone.

On one of its faces there is a plaque with the following inscription: "Gannets monument.. Homage of the civic movement Facts and Not Words to Daniel Lemaitre. Sculptor: Eladio Gil Zambrano".

Eladio Gil Zambrano is remembered by the city as a foreigner living in the country, to whom the city of Cartagena owes the fact that he participated in the formation of artists of the new generations that today represent the plastic arts of the city.

Arrives when the winter fogs the day

and, herald of the sturdy tribune,

it beats through the stillness of the inlet

the gray oar of its melancholy...

A condensed, positive history of Spain
October 10th, 2022
Bar in Cartagena among the 10 best in the world
October 5th, 2022
One of the best bartenders in the world lives in Colombia
September 14th, 2022

Suddenly he cuts his flight; it would seem

that he has been wounded by death in passing,

and breaks the blue glass of the bay.

Certainly, as it swallows, from its enormous beak

a reflection of polished metal:

it's the tragic end of a fish that albeys!

Then, old philosopher in agreement,

as if nothing had happened,

he lets himself be swung by the tide...