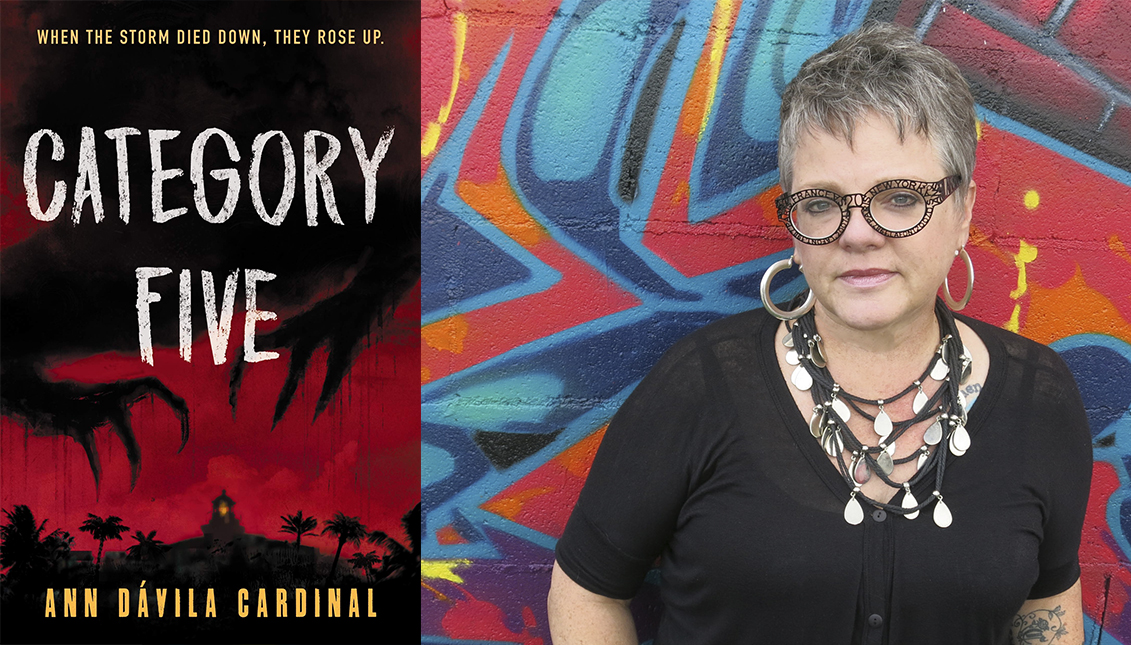 The author, 'Gringa-Rican' Ann Davila Cardinal, puts us in a post-Maria Puerto Rico and tears our hearts out. But they still beat.

The spirits live on the median of a highway between the Here and the Afterlife. Anchored to the earth that saw them die, they hoot like the wind about crimes of which they were a part. They are memory and consciousness of a place, and although none can remedy what happened to them, they become spokespeople of the future.

Raised between magical realism and horror novels with one foot in the island of her ancestors and the other in the United States, Vermont-based author Ann Davila Cardinal knows better than anyone what it is to live between two worlds. What unites and cements them is supernatural terror.

In Category Five (June 2020, MacMillan), which won this year's International Latino Book Award, the author of youthful terror relocates Lupe, a young Puerto Rican woman raised in Vermont and with a difficult childhood, to Puerto Rico to help her uncle, a police chief, solve some chilling murders again.

Only this time, Lupe arrives on the island after Hurricane Maria, the category five natural disaster that hit in 2017, whose aftermath its citizens are still living.

But Davila, in a very intelligent way, places us in Vieques, where specters wander and corpses with their hearts torn out have begun to appear. This is part of a real estate scheme in which a U.S. developer has taken advantage of the fact that the land is cheap to build tourist complexes, and all the victims seem to be related to the ruse of exploitation.

As in the case of her first novel, Five Midnights, the author, who defines herself as a "Gringa-rican," uses terror to make a profound social criticism, in addition to describing with total fidelity the life and feelings of her people — the way, for example, she describes the food, the approach to death and funerals, the speech and joy, the colonial trauma and the role of the United States — the rage and resentment against a country of which many Puerto Ricans feel helpless.

After a hurricane in 1928, many residents of Vieques Island were relocated and the United States used it for weapons testing.

And, of course, the contradictions involved in the search for an identity, when both sides tell you that you are neither Latino nor American enough. Between the Here and the Beyond, like a ghost.

It's something that happened to Davila Cardinal herself, who shares biographical traits as its protagonist — both are the daughters of alcoholics and raised in the United States. Both, too, suffered the feeling of not belonging imposed in large part by others and by oneself.

"With age I have come to peace with that. I know that the island runs in my veins along with my father's blood. I feel closer to that side of my family because of what they put me through and if I'm not Puerto Rican enough for some people, that's fine. But it took me years to get here and I wanted Lupe to come to that understanding at a younger age," the writer said in an interview with Den Of Geek.

In Five Midnights, this identity reflection was somewhat greater, as Lupe faced rejection because of her clearer skin, while Davila, in turn, worked on the first book about the problem of addictions in Puerto Rico by rescuing a fearsome monster of Latin folklore, the Cuckoo, who, for her, embodies drugs.

"What you are inside is what you are, no matter what they tell you. And addiction is a monster that can be overcome if you are willing to face it, and having a chosen family or blood behind you is invaluable," she added about Five Midnights, which won a Latino Book Award and was a finalist in the prestigious Bram Stoker.

Ghosts symbolize old traumas that are not forgotten.

Now her characters have evolved in an organic way. In fact, Davila Cardinal placing them in the post-Maria era has a lot to do with reality, since the hurricane hit while she was finishing her first novel and Ann felt within herself all the uneasiness and rage for the lack of help coming from the United States that she needed to undertake the writing of Category Five.

In addition, Ann Davila addresses in the second work one of the unresolved traumas of Puerto Ricans that has been widely forgotten in the history of their relationship with the United States and invites us to remember the mistakes always tend to be repeated:

After a hurricane in 1928, many Vieques residents were relocated to St Croix in 1941 by the U.S. Navy, and the island was used for weapons testing until a rain of protests led to its withdrawal in 2003.

As Davila Cardinal would say, ghosts symbolize old pains that are not forgotten. At least when you read a horror novel, the fear ends when the zombies are finished. But there are other terrors that accompany us, that are still very much alive.

In that median of the highway between the past, the present and a future that is like a door ajar. Anything can come from the other side.