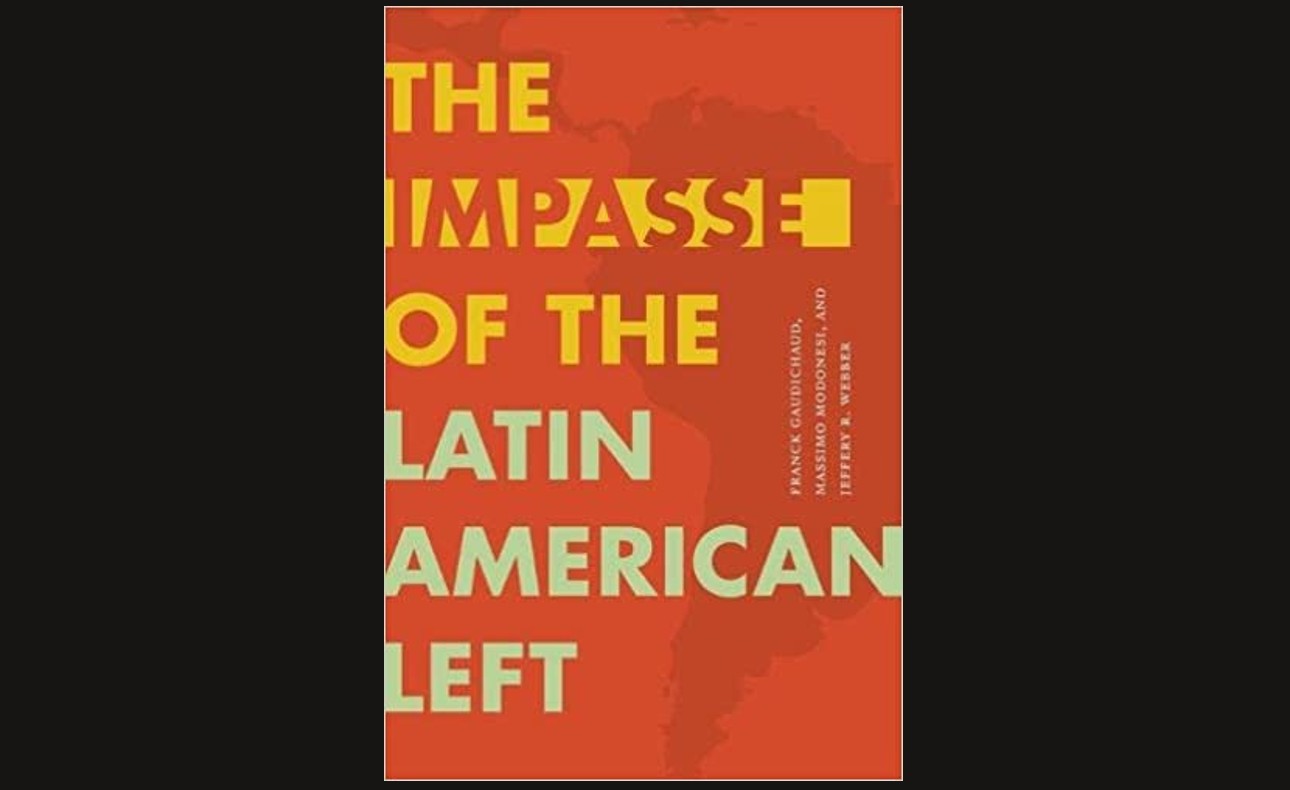 ‘The Impasse of the Latin American Left’: What did we learn from the Pink Tide?

A new book explores the region’s Pink Tide as a political, economic, and cultural phenomenon

At the turn of the 21st century, Latin American politics experienced a surge in progressive movements, as popular uprisings for land and autonomy led to the election of left and center-left governments across the region. These progressive parties institutionalized social movements and established forms of state capitalism that sought to redistribute resources and challenge neoliberalism.

In The Impasse of the Latin American Left (Duke University Press, 2022), European historians Franck Gaudichaud, Massimo Modonesi, and Jeffery R. Webber explore the region’s 'Pink Tide' as a political, economic, and cultural phenomenon, and demonstrate that these governments failed to transform the underlying class structures of their societies or challenge the imperial strategies of the United States and China.

Now, as the Pink Tide has largely receded, the authors offer a portrait of this watershed period in Latin American history to evaluate the successes and failures of the left and to offer a clear-eyed account of the conditions that allowed for a right-wing resurgence.

“The authors view the radical 21st-century Latin American governments more favorably than those of the moderate left,” writes Steve Ellner, a retired professor at Venezuela’s Universidad de Oriente, in his book review for NACLA magazine. “They credit Chávez for being largely alone in achieving certain structural economic changes through expropriations. In contrast, Brazil, according to the authors, became a 'sub-imperial' power with 80% of its exports going elsewhere in the region in the form of 'industrialized products of high or (mostly) medium grade technology,' largely in return for natural resources and other primary products from its neighbors.”

According to Ellner, the feature most emphasized in the book is the Pink Tide’s tight control and demobilization of social movements.

The most important moments in Fernando Allende's life
August 11th, 2022
Memoirs of a political prisoner in El Salvador
July 11th, 2022
The Spanish odyssey to bring the smallpox vaccine to the colonies of Asia and Latin America
June 15th, 2022

“Popular movements were essential elements in the rise to power of the Pink Tide," he added. In the case of Brazil and Bolivia, Lula and Morales emerged from them, and in Venezuela, Ecuador, and Argentina, they forced presidents out of power. “The book’s authors allege that Pink Tide governments and parties ended up taming and disciplining social movements and in other cases marginalizing them,” he concluded.

“In this important new book, Franck Gaudichaud, Massimo Modonesi, and Jeffery R. Webber provide a timely and incisive analysis of the left’s waning fortunes in Latin America over the past two decades. The limits of what they call progressivism in this convulsed region offer great lessons for popular struggles and left politics around the world,” wrote William I. Robinson, author of Global Civil War: Capitalism Post-Pandemic. “The study could not be more timely given the devastating impact that the crisis of global capitalism and the coronavirus pandemic have had on Latin America. A must-read for students of Latin America and for all those concerned with advancing genuinely transformative projects in the twenty-first century.”

Franck Gaudichaud is a Professor of History and Latin American Studies at Universite Toulouse-Jean Jaurès.

Massimo Modonesi is a Professor of Sociology at Universidad Nacional Autónoma de México.

Jeffery R. Webber is an Associate Professor of Politics at York University.

TAGS
reydan.marckus
Finally a proven way of earning money online. Yes! you can earn more than you think only by working just a few hours from home regularly. I have been doing this job for like a few weeks and my last weekly payment was exactly 35,337 dollars. See More Information Here…..> 𝐰𝐰𝐰.𝐰𝐨𝐫𝐤𝐬𝐭𝐚𝐫𝟐𝟒.𝐜𝐨𝐦
wixeyi8058
Making money online more than $15k just by doing simple work from home. I have received $18376 last month. Its an easy and simple job to do and its earnings are much better than regular office job and even a little child can do this and earns money. Everybody must try this job by just use the info on this page.

Open The Link----------->>> 𝐖­­𝐰­­𝐰­­.𝐖­­𝐨­­𝐫­­𝐤­­𝐒­­𝐢­­𝐭­­𝐞­­𝟐­­𝟒.𝐂­­𝐨­­𝐦
soticid364
I’m making over $17k a month working part time. I kept hearing other people tell me how much money they can make online so I decided to look into it. Well, it was all true.
This is where i started… 𝐰𝐰𝐰.𝐡𝐦𝐣𝐨𝐛𝐳.𝐜𝐨𝐦
dojine9995
Google is now paying $99 to $140 per hour for doing work online work from home. Last paycheck of me said that $18537 from this easy and simple job. Its amazing and earns are awesome. No boss, full time freedom and earnings are in front of you. This job is just awesome. Every person can makes income online with google easily...===))> 👉 Www.incomesboost.com
cavoha8284
𝐈 𝐠𝐞𝐭 𝐩𝐚𝐢𝐝 𝐦𝐨𝐫𝐞 𝐭𝐡𝐚𝐧 $𝟗𝟎 𝐭𝐨 $4𝟎𝟎 𝐩𝐞𝐫 𝐡𝐨𝐮𝐫 𝐟𝐨𝐫 𝐰𝐨𝐫𝐤𝐢𝐧𝐠 𝐨𝐧𝐥𝐢𝐧𝐞. 𝐈 𝐡𝐞𝐚𝐫𝐝 𝐚𝐛𝐨𝐮𝐭 𝐭𝐡𝐢𝐬 𝐣𝐨𝐛 𝟑 𝐦𝐨𝐧𝐭𝐡𝐬 𝐚𝐠𝐨 𝐚𝐧𝐝 𝐚𝐟𝐭𝐞𝐫 𝐣𝐨𝐢𝐧𝐢𝐧𝐠 𝐭𝐡𝐢𝐬 𝐈 𝐡𝐚𝐯𝐞 𝐞𝐚𝐫𝐧𝐞𝐝 𝐞𝐚𝐬𝐢𝐥𝐲 $𝟏𝟎𝐤 𝐟𝐫𝐨𝐦 𝐭𝐡𝐢𝐬 𝐰𝐢𝐭𝐡𝐨𝐮𝐭 𝐡𝐚𝐯𝐢𝐧𝐠 𝐨𝐧𝐥𝐢𝐧𝐞 𝐰𝐨𝐫𝐤𝐢𝐧𝐠 𝐬𝐤𝐢𝐥𝐥𝐬 . 𝐒𝐢𝐦𝐩𝐥𝐲 𝐠𝐢𝐯𝐞 𝐢𝐭 𝐚 𝐬𝐡𝐨𝐭 𝐨𝐧 𝐭𝐡𝐞 𝐚𝐜𝐜𝐨𝐦𝐩𝐚𝐧𝐲𝐢𝐧𝐠 𝐬𝐢𝐭𝐞…

Open The Link———–>>> 𝘄𝘄𝘄.𝗡𝗲𝘁𝗖𝗮𝘀𝗵𝟭.𝗖𝗼𝗺
simaga8455
These are 2 pay checks $17367 and $18367. that I got in last 2 months.I am extremely cheerful that I can influence thousands in my part to time and now I am making the most of my life.Everybody can do this and acquire heaps of dollars from home in brief time period.Just visit this site now.GOOD LUCK..
:) AND GOOD LUCK.:)
HERE====)> 𝐰𝐰𝐰.𝐞𝐚𝐬𝐲𝐰𝐨𝐫𝐤𝟐.𝐜𝐨𝐦
haweb69894
I make more then $12,000 a month online. It’s enough to comfortably replace my old jobs income, especially considering I only work about 11 to 12 hours a week from home. I was amazed how easy it was after I tried it…
🙂 AND GOOD LUCK.:)