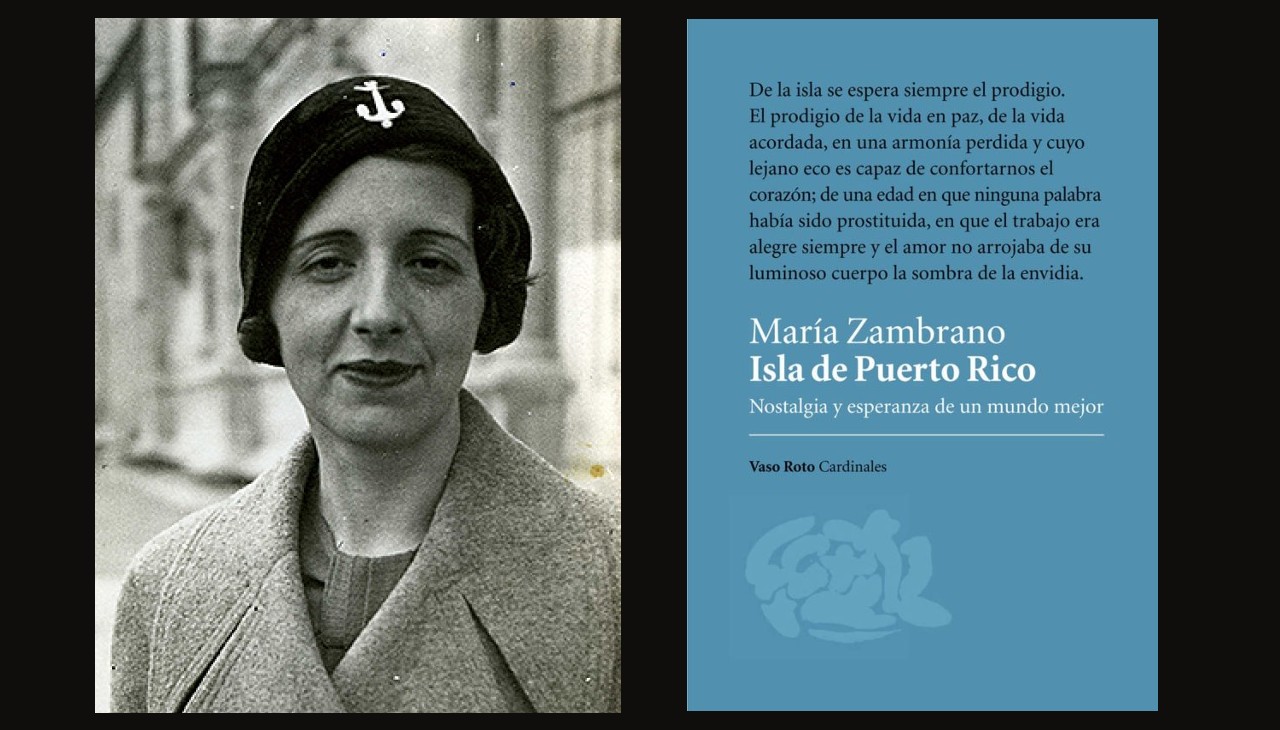 In 1940, Spanish philosopher María Zambrano published 'Isla de Puerto Rico,' a tribute to a land where she lived in exile between 1942 and 1944

The name María Zambrano may be unfamiliar to the Latin reader. However, this Spanish philosopher, intellectual and essayist born in Malaga in 1904 was an essential figure in understanding the totalitarianism that plagued Europe in the 20th century and the lives of hundreds of Spaniards who fled to Latin America to escape the civil war and Nazi barbarism. Her critical thinking and pro-democracy ideas were novel and dangerous.

Moving between civic commitment and poetic thought, Zambrano is the author of several books and academic essays, but one of the books that best expresses her idea of exile is Isla de Puerto Rico: Nostalgia and hope for a better world, a tribute to a land where she lived in exile between 1942 and 1944.

First published in Havana in 1940, Spanish publisher Vaso Roto republished the text in 2017 with the careful issue and visibility it deserved.  For American readers, the book — an account of her exile to America to flee a Europe threatened by totalitarianism — is now available in ebook and paperback on Amazon.

In its pages, Zambrano reveals the high price she had to pay for exile: scarcity and loneliness became her indefatigable companions, first in Paris, then in Havana and Mexico, but she still does not give up her struggle. She finally landed in Puerto Rico and from there, she nostalgically contemplated the devastation of her continent of origin and turned her eyes to America, for hope of a better world.

A Life in Exile

The exile of Zambrano, an intellectual committed to Republican ideas, began on Jan. 28, 1939, a few months before Franco's troops won the Spanish Civil War, crossing the French border with her mother, her sister Araceli, her husband and other relatives.

In France, Maria was reunited with her husband and after a brief stay in Paris, and they left for Mexico at the invitation of the Casa de España, stopping first in New York and Havana, where she was invited as a professor at the University and the Institute of Higher Studies and Scientific Research. In Mexico, she was appointed professor at the Universidad Michoacana de San Nicolás de Hidalgo in Morelia. She then lived for a few years between Puerto Rico and Cuba.

In Puerto Rico, she worked as a teacher at the University of Puerto Rico-Rio Piedras Campus. Later, back in Mexico, she published the books Filosofía y poesía and Pensamiento y poesía en la vida española.

At the end of World War II, Zambrano returned to France for a while, and lived between Latin America and Europe, until finally returning to Spain. In her old age, she received the two highest literary awards granted in Spain: the Prince of Asturias Prize in 1981, and the Cervantes Prize in 1988.