The Squad got bigger in 2021, but also has new challengers. Photo: Getty Images

Congress’ newest members were sworn in on Jan. 3, 2021 to great excitement and anticipation.

While there are still a few races that have yet to be called, it’s already evident that the 117th session of Congress is breaking records in terms of diversity. So far, the number of women elected has surpassed 2019’s record, and there’s also a record number of people of color and LGBTQ people that were sworn in on Sunday, Jan. 3.

In the House, Representative Cori Bush will become the first Black woman to represent Missouri in Congress. New Mexico became the first state to elect all women of color into its House delegation, including Reps. Yvette Herrell, and Teresa Leger Fernandez.

Haaland will need a replacement should she be confirmed as Biden’s Secretary of the Interior.

Democrat Marilyn Strickland has also become the first Black member of Congress from Washington State and the first Korean-American woman elected to Congress. Strickland also became the first woman to wear Hanbok, a traditional Korean dress, during the ceremony, to honor her heritage.

But the burst of diversity doesn’t stop here. 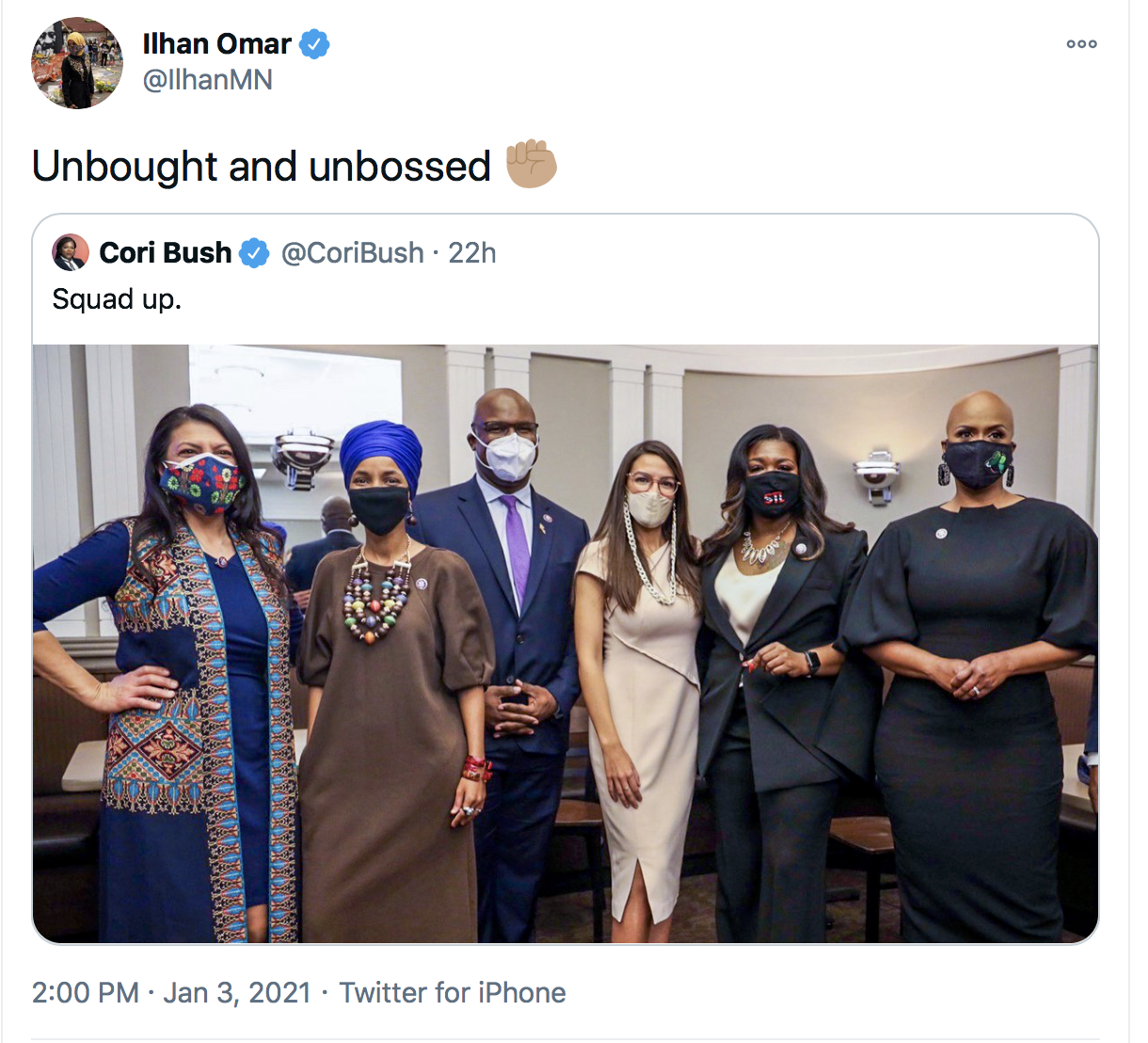 Omar quote tweeted with the words “Unbought and unbossed,” a feminst mantra of Shirley Chisholm, the first Black woman elected to Congress in 1968. On the Republican side of the House, which gained major ground in the 2020 elections, Florida Reps. Carlos Giménez and María Elvira Salazar joined the ranks as voices for conservative Latinos.

Despite the accomplishment, Salazar announced on Dec. 31 that she was diagnosed with COVID-19 and did not attend Sunday’s ceremony.

Once she completes self-isolation and takes office, she said she is ready to fight against the Democrats, particularly the “Squad,” as she feels it’s wrong to preach the message that the U.S is in need of a dramatic makeover.

Although the Squad is a popular household name at this point, and grows in number in 2021 the group of progressive representatives is not immune to criticism, even from progressive voters.

In response to Bush’s tweet, some users expressed their disappointment with the fact that almost every member of the group voted for Nancy Pelosi, who’s had past disagreements with the growing progressive wing of Congress.

Commenters insisted that none of them were truly “unbossed.”

Pelosi barely managed to maintain her spot as Speaker of the House, beating challenger Rep. Kevin McCarthy 216 to 209.

In the Senate, six new members were sworn in, including former New Mexico Representative (now Senator) Ben Ray Luján. The upcoming Georgia runoff elections will determine which party controls the chamber in the coming years.

To get AL DÍA Print Edition at the comfort of your home, please click here
TAGS
Congress
Latinos
AOC

Latinos who dazzled at the Met Gala

'Tax the Rich,' AOC's message stands out on the Met Gala red carpet

Pelosi announces Squad, other progressives to serve on House committees