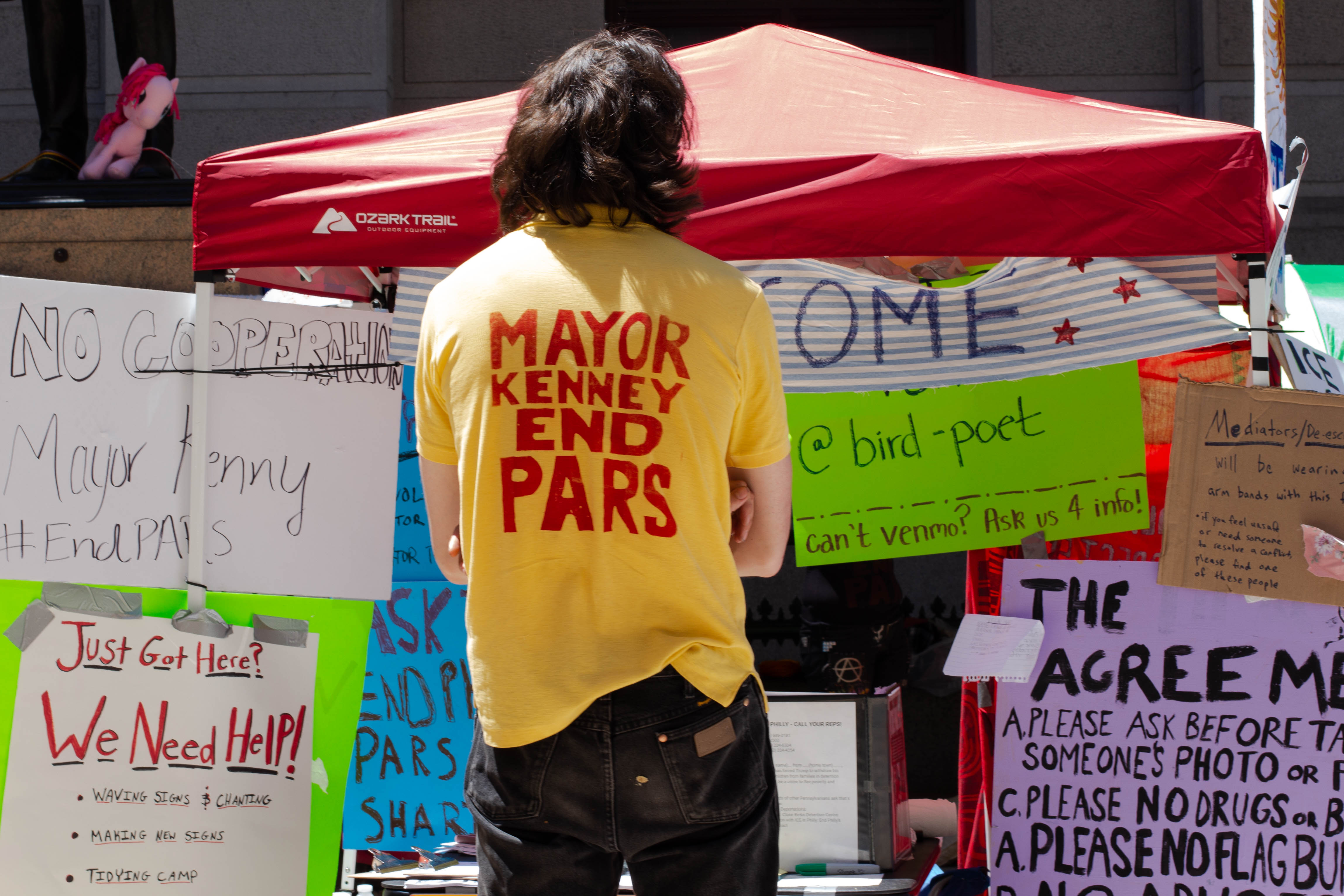 The “Occupy ICE PHL” movement, the Philadelphia branch of the nationwide “Occupy ICE” protests to abolish Immigration and Customs Enforcement (ICE), will hold a gathering on Tuesday at 6:30 p.m. for participants to organize and discuss next steps at the Friends Center on Cherry and 15th Streets.

Occupy ICE is taking new form in Philadelphia, where demonstrators are calling on Mayor Jim Kenney to end the city’s sharing of the Preliminary Arraignment Reporting System (PARS) with ICE authorities and pushing for the shut down of the Berks County Residential Center, in addition to the overarching, national goal of abolishing ICE. Supported by Juntos, members of the Philadelphia Democratic Socialists of America (DSA), the Liberation Project and several other left-leaning organizations and individual activists have made a makeshift camp out of tarps, sheets and slogan signs on the east end of City Hall.

The demonstrators at City Hall were told they can legally occupy the space, but cannot pitch tents or have generators. They had been using an outlet on the side of the building to charge phones and play music, but it apparently shut off during the day on Monday, according to protesters. Occupy ICE PHL has been reaching out to supporters on Facebook to donate money, food and supplies to their encampment and sign onto petitions to stand with their three demands.

Refusing to Back Down

The first round of occupiers started out last week in front of ICE’s Philadelphia Field Office at 8th and Cherry Streets, where they were warned several times by police not to block the office’s entrance and were eventually asked to disperse. Twenty-nine people were arrested and given citations the first day of occupation, and seven more were cited on Thursday, NBC 10 reported. According to Brian W., a member of the Liberation Project who did not want his last name used, police officers forcefully removed protesters, himself included, who were being peaceful and nonresistant.

Brian said he feels it is his responsibility as a U.S. citizen to stand up for undocumented immigrants who may fear the implications of ICE involvement in the city. He is giving up shifts at work and free time to be present at the occupation, where he has been since Thursday.

“Given that the actions of ICE and of the PARS agreement specifically target undocumented immigrants, many of these folks do not feel safe putting their bodies on the line and being present at this action, as that does elevate their risk,” Brian said. 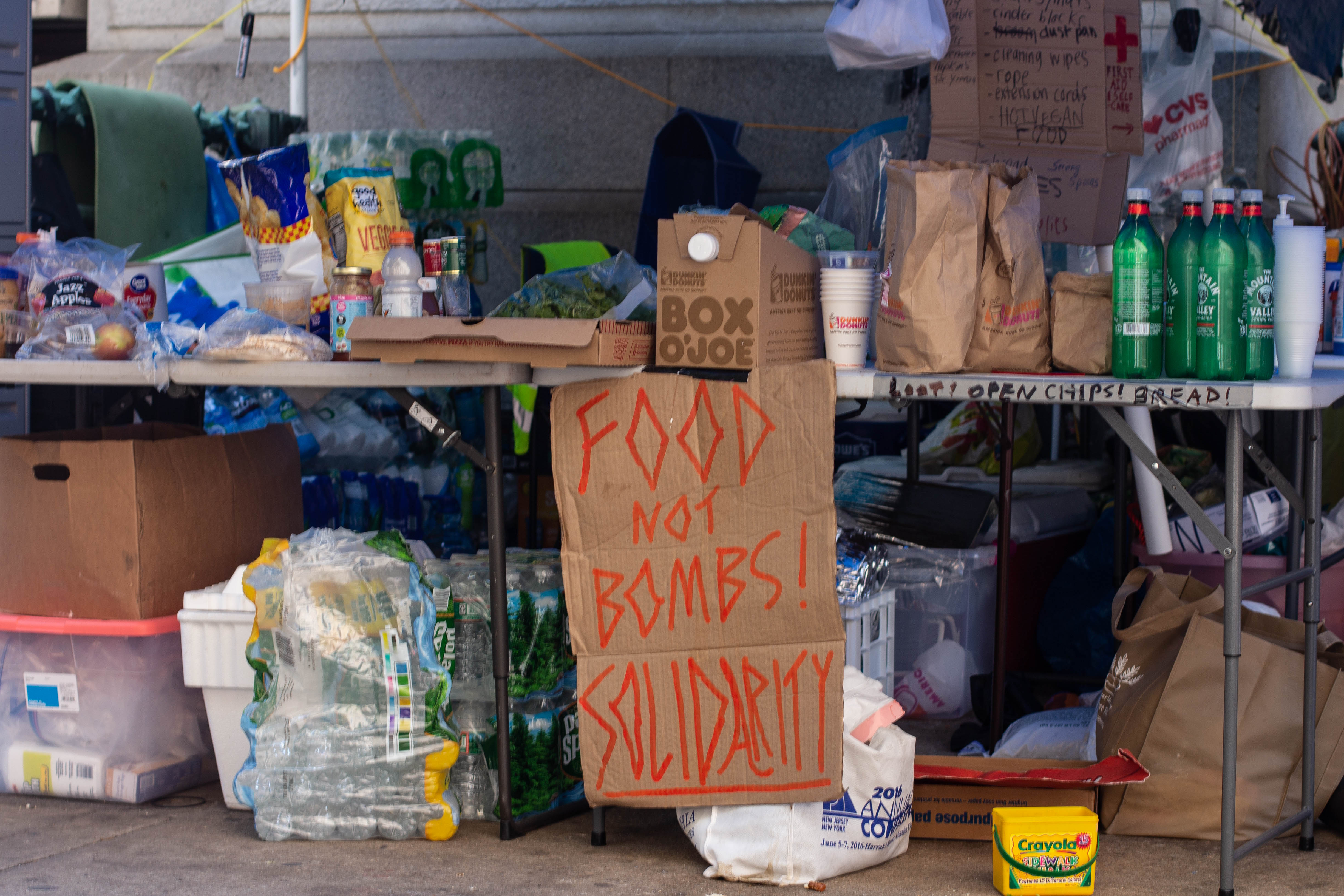 The PARS agreement with ICE is expiring at the end of August, and demonstrators want the sharing of defendant information - such as names, addresses, birth dates, places of birth, and upcoming court dates - to be halted. They argue that this information alone is enough for ICE to locate persons-of-interest and detain them, despite the fact that law enforcement does not report on immigration status as a “sanctuary city,” and that all of those in the PARS system have been accused, but not convicted, of crimes.

“PARS comes into effect when someone is arrested,” Philly DSA member Jamie Rush said. “It could be wrong place, wrong time, nothing. That is obviously wrong to send people who are arrested, not charged with anything, to send that information to ICE.”

Mayor Kenney told WHYY that if the city continues to ruffle feathers at the federal level, the Department of Justice (DOJ) could appeal to defund criminal justice efforts in all sanctuary cities and attempt to increase ICE presence in local law enforcement. While he said he supports the demonstrations and their primary goal of condemning the treatment of immigrant families by ICE, the mayor is undecided on whether ending the PARS agreement would backfire on Philadelphia’s immigrant population if the DOJ wins in federal court. The mayor also said he does not want a repeat of the 2011 Occupy Wall Street movement, when the city spent hundreds of thousands of dollars to settle protesters’ civil rights lawsuits.

To preserve the $1.6 million from the Byrne Justice Assistance Grants (JAG) last year, the city complied with Section 1373 of Title 8 in the U.S. Code, which requires immigration information to be shared with the federal government. Philadelphia does not collect the documentation status of individuals to maintain local law enforcement’s relationship with immigrant communities, but does share criminal reports with ICE through its PARS system. A federal district court judge ruled last month that the DOJ cannot compel local government with the condition of lost funds in this manner, giving the city a potential avenue to let PARS expire. 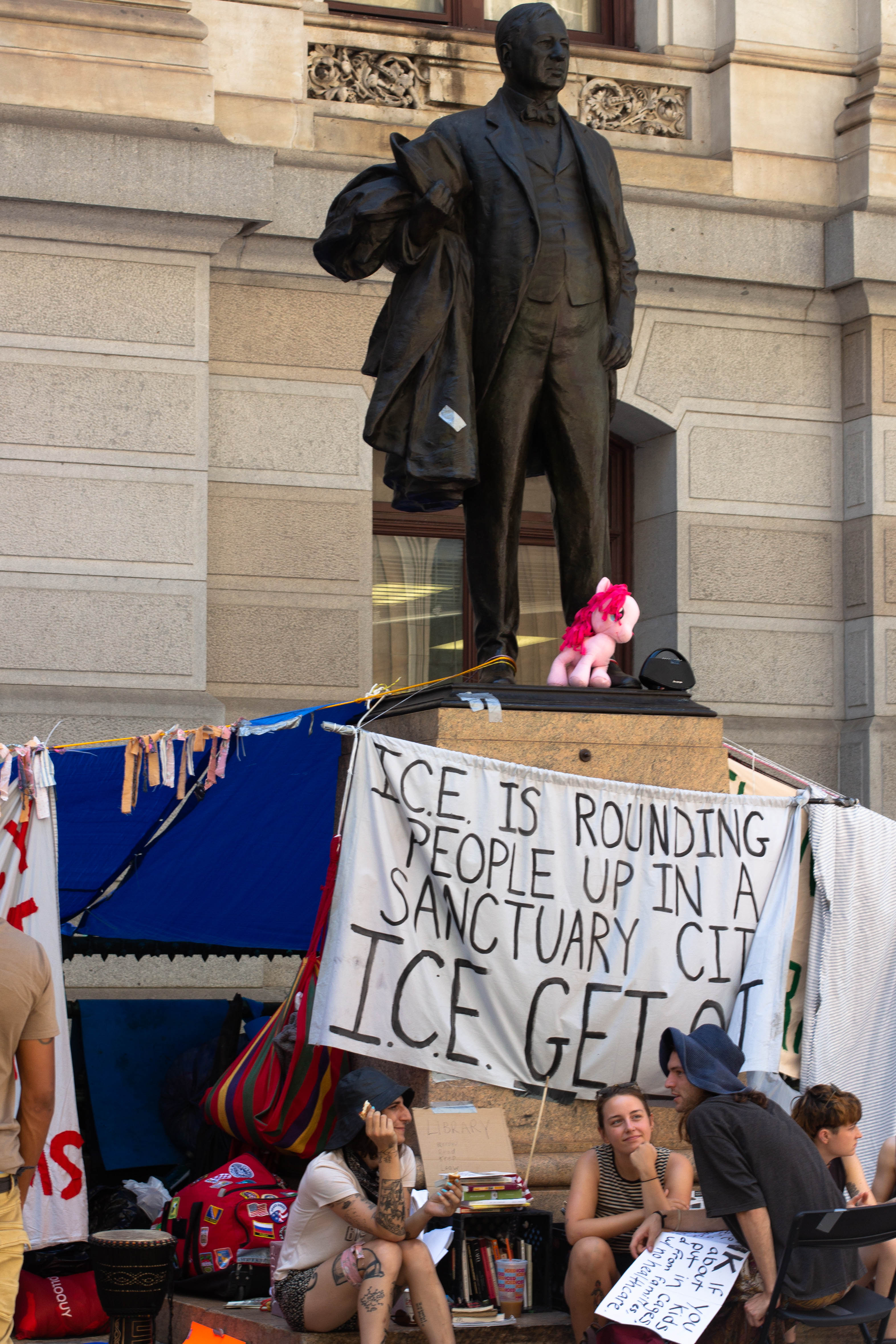 The Trump administration attempted to defund sanctuary cities using criminal justice grants awarded to help with local law enforcement in June 2017, but it was ruled unconstitutional for the executive branch to make such decisions on funding, and order the detainment of ICE persons-of-interest without warrants.

Judicial opposition to executive orders allowing ICE into local law enforcement is strong, but Kenney has expressed fear that the DOJ still has the opportunity to appeal court decisions, which could lead to eventual defunding. The City of Philadelphia previously acknowledged that it was required to share some immigrant information with ICE under Section 1373.

The city states in its documentation on immigration policies that “Philadelphia works with our federal partners and does not stop ICE from arresting Philadelphians whom they believe are undocumented.” However, the city, along with several other sanctuary cities, have declined some federal actions, like the order to detain undocumented individuals on behalf of ICE, unless it has a judicial warrant evidencing criminal conduct.