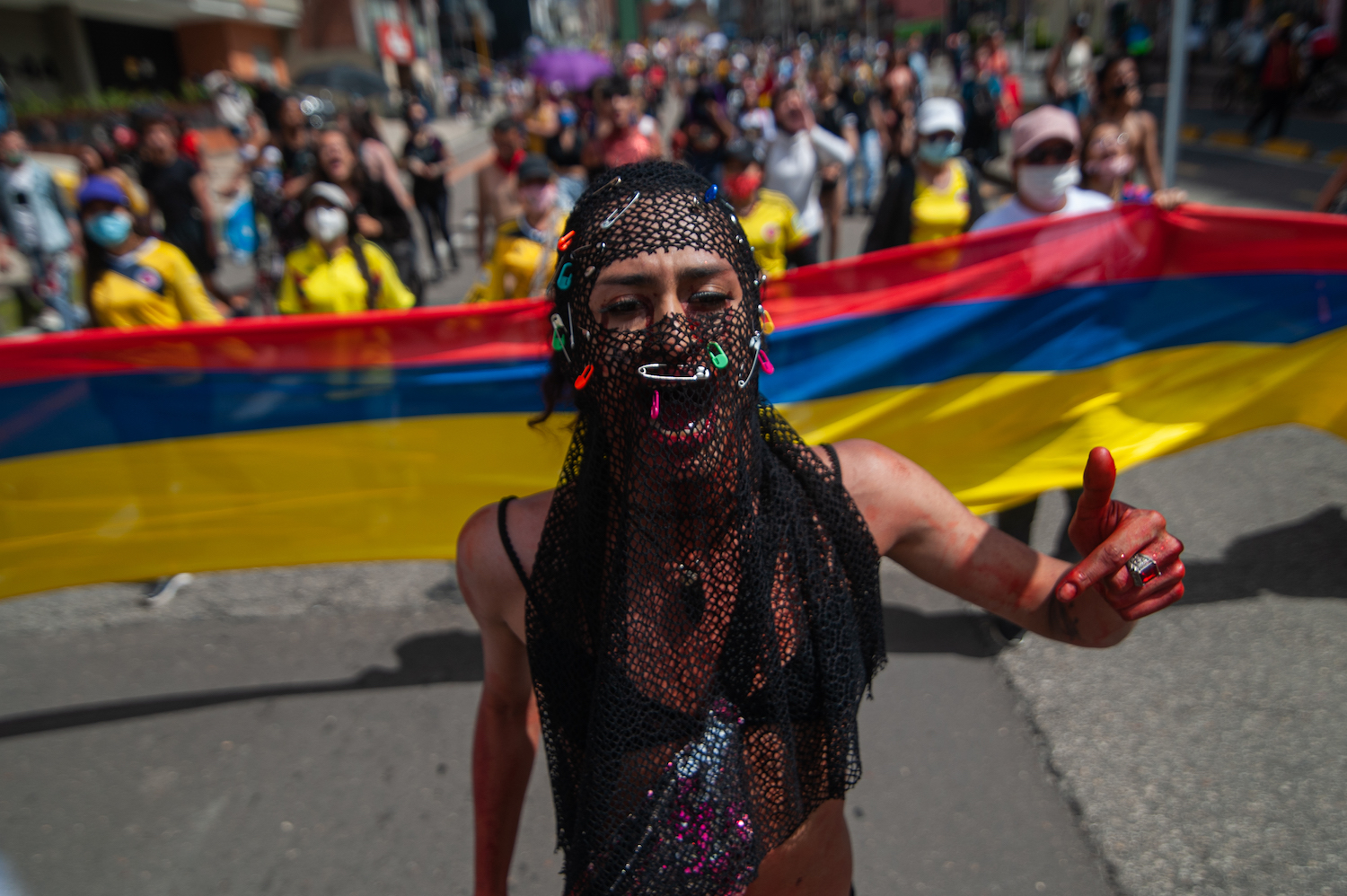 A demonstrator from the Transgender Community shouts and participates as LGTB+ and Trans communities participated in the demonstrations against the government of President Ivan Duque. Photo: Sebastian Barros/NurPhoto via Getty Images

There are growing reports of disappearances and sexual violence against women involved in Colombia’s protests against its repressive right-wing government.

The demonstrations have largely been reported to be violent, but they didn’t begin this way.

What began as a general strike against the President’s fiscal plan — to advocate for accessible, safe and comprehensive health care for everyone in Colombia — was quickly met with violence by police, intensifying the driving factors for the unrest that spanned several years, and in some cases, decades.

Briefly put, they’re an extension of the growing frustration towards Colombia’s COVID-19 response and police violence. They’re also a continuation of a 2019 movement that swept Latin America, where Colombia also mobilized on a massive scale for the first time in decades. At the time, Duque’s actions caused tensions among several Colombian social sectors and organizations when he tried to dismantle the nation’s Special Jurisdiction for Peace.

During the subsequent COVID-19 pandemic in 2020, Latin America became one of the hardest-hit regions in the world, and quickly lost a bulk of the progress in closing the poverty gap accomplished over the last 20 years.

In Colombia, the economy dipped by an average of 7% during the pandemic. Unemployment, particularly among younger demographics, is also soaring.

Massive protests, particularly in Bogotá, Cali and Medellín, continue where citizens are at their wits end with excessive police force, inequality, and rising poverty. But militaristic forces have countered with even more overwhelming force, and videos have surfaced showing vehicles firing rounds of unknown ammunition into neighborhoods, and countless depictions of violent clashes with civilians.

The National Ombudsman’s Office put the number of those killed at under 30. However, according to Colombian human rights groups, the violence has left at least 40 people dead, at least 111 missing, and nearly 1000 people injured. Most of those killed or injured have been demonstrators.

The danger of the front lines

Among the front lines of these protests, are women, including Trans women, and non-binary individuals that run a higher risk of facing violence.

These are the same populations witnessed on the front lines of the demonstrations, even making headlines for their powerful shows of bravery, including a group of LGBTQ+ protestors who made international headlines for vogueing next to armed forces, and marching through the streets just days into the start of the nation’s protests.

Videos depict a united show of solidarity that verges on festive, but these demonstrators were putting their lives on the line. In the first half of 2020 alone, LGBTQ+ people were subjected to rising violence, totaling 63 killings. Among those were 17 trans women, 12 gay men, six lesbian women, one trans man, and other individuals from the community whose sexual orientation and gender identities have yet to be specified, reports Dazed.

This already existing situation sets a dangerous precedent for what is currently happening amid the clashes with police, where the chaos gives way for further crimes to happen under the cover of disorder.

Sexual violence against women and within the LGBTQ+ communities is vastly underreported, and there have already been 12 reports of police or military forces assaulting civilians during protests. There have also been over 3oo reports of physical violence by the police, according to Human Rights organization Temblores, in conjunction with Indepaz, a Colombian human rights and peace organization.

These numbers, also likely underreported, point to a broader misogynist problem wherein authorities are using sexual violence to silence women and LGBTQ+ individuals that are mobilizing for the people’s rights. Trans women themselves already face a disproportionate level of violence.

According to one woman, Diana Fernanda Díaz, who released a statement on social media on April 30 on the violence she endured during the first nights of protest, she recounted a pair of officers approaching her group of friends, and one of them sexually assaulted her.

They told her: “If you don’t want anything to happen, why don’t you stay home? Stop crying, go and keep house. If you don’t like it, why come to the marches?” Díaz told PACIFICTA!

The police are using sexual violence as measures to stop women from speaking out and attending the demonstrations.

This isn’t new, but the widespread issue has garnered the attention of Amnesty International, who renounced the militarized response and repression of Colombia’s demonstrations, and later issued a statement on the “concerning” reports of disappearances and sexual violence against protestors.

“Enforced disappearance and sexual violence perpetrated by authorities are crimes under international law that any state should investigate and prosecute,” Amnesty International wrote in a press release.

As for the over 100 disappearances, there hasn’t been any response by Colombia’s justice system to move forward in locating the reported missing persons.

President Duque recently put out a statement warning Indigenous Protestors who are leading mobilization efforts in Cali, the city at the epicenter of protests in Colombia. On Monday, May 10, he announced more security forces would be deployed to the city, and urged Indigenous leaders to leave.

Another national strike day is also said to be planned for Wednesday, May 12, to mark the third consecutive week of protest against police violence and the militarization of cities.

While the estimated death toll rests at 40, the total sum remains unclear. Among the victims is social justice advocate Lucas Villa, who was killed while peacefully protesting on May 4, after being shot eight times by Colombian police.