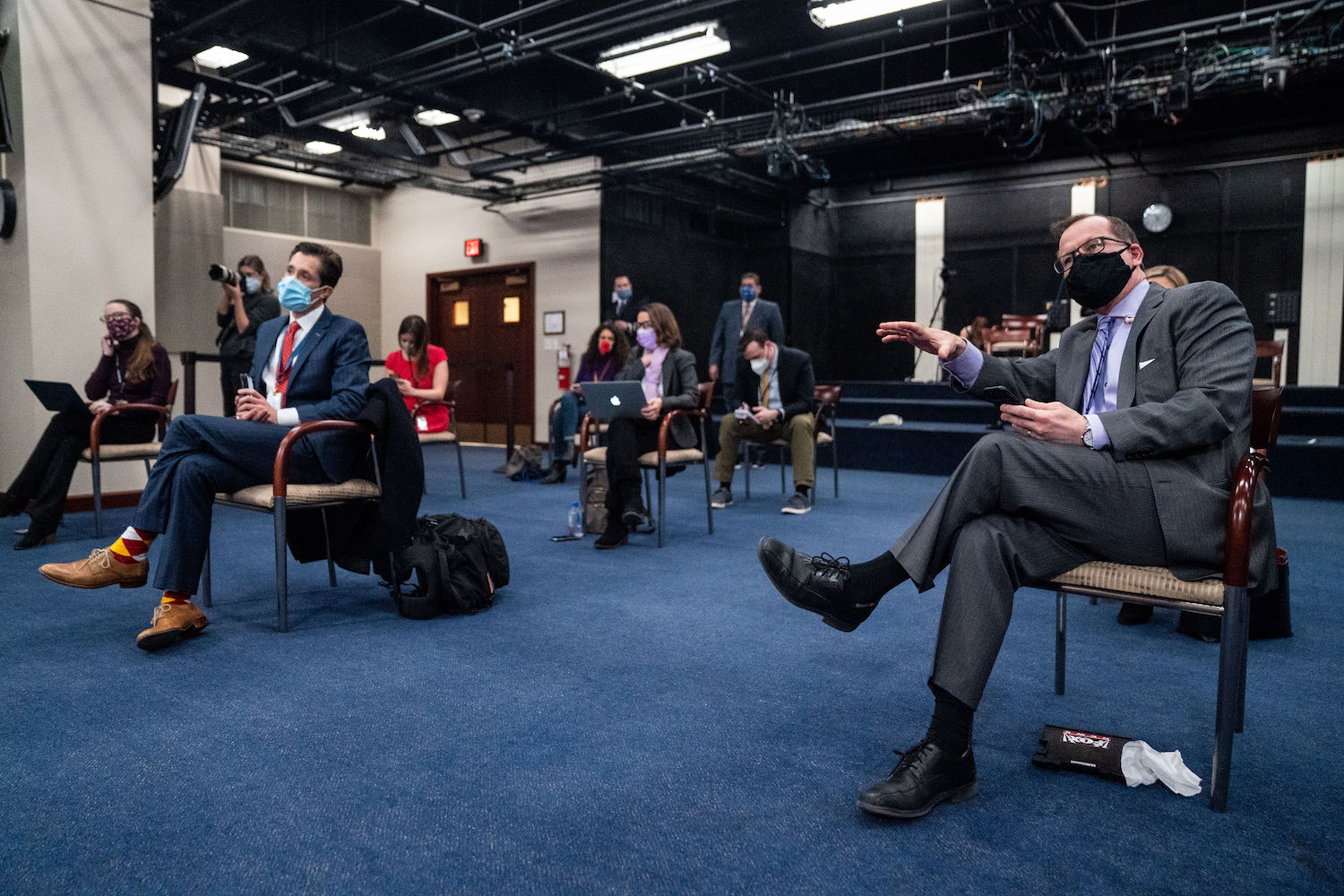 The main story here is how antiquated media rules are gatekeeping outlets of Color from having access to report in Congress. Photo: Reporters, sitting socially distant, ask Speaker of the House Nancy Pelosi (D-CA) questions during a weekly press…

While established institutions are easily credentialed to report on the Capitol, newer, BIPOC-led publications face hurdles based on antiquated rules.

The 117th Congress is the most diverse in history, but it’s quickly become clear that below the ranks, from congressional staffers and aides who keep Washington running, the staff is overwhelmingly white.

The same goes for the journalists who are credentialed to report on Capitol Hill.

Ultimately, it’s the established journalists from major media outlets that tell the story of Congress, but as a whole, the news that is pursued is not reflective of all readers.

This is not to say it’s bad journalism. On the contrary, these journalists are there because they’ve put in the work for years. But the landscape of the United States is changing, and there is a growing population of journalists and readers who want Congress’ take on what’s happening in Colombia, Ecuador, and Palestine — not the Liz Cheney debacle.

These journalists from BIPOC-led publications are looking for how elected officials will respond to crises that are close to their readers, not another take on the headlines of the day.

The landscape of journalism itself is changing, and as is the case with Futuro Media’s Latino Rebels, as they broke into the space long occupied by major media to report on stories that their Latino readers are interested in.

For a month, their DC Correspondent, Pablo Manríquez,  took on this role, but Futuro Media’s temporary credentials were recently revoked by the Executive Committee of Periodical Correspondents, citing that their publication does not fit rules dating back to the 1970s.

This points to a larger issue, of how antiquated media rules at the top of the nation’s press committee are denying emerging, nonprofit outlets — often outlets of color — to report for their audiences, and the utter lack of BIPOC-led outlets with a credentialed presence on Capitol Hill.

How many Latino or BIPOC outlets actually have credentials?

With the temporary departure of Latino Rebels from the credentialed list — which hasn’t been updated since 2020 — there is currently no independent U.S. Latino news publication reporting on Capitol Hill to write about the issues most pressing for U.S. Latinos.

Of the U.S. Hispanic or Latino media publications listed on the Periodical Press Gallery website, just Hispanic Link DC and The Hispanic Outlook in Higher Education are listed.

Hispanic Link DC is a D.C. Hispanic News publication that hasn’t been updated since 2014. Additionally, it was distributed through the Los Angeles Times — their “in” so to speak.

The Hispanic Outlook in Higher Education is an educational magazine. Their Congressional correspondent — a white woman —  has held credentials since 2006, but “Hispanic” is not representative of all U.S. Latinos.

The only Latino publication outside of the U.S. is Proceso, a Mexican news magazine based in Mexico City.

Outside of the U.S. is Asia Today, and Caijing, both major east Asian global news platforms.

While there are outlets like NBC Latino or Huffington Post Latino that rigorously cover Latino news, these are part of their digital news operations.

BIPOC-focused standalone publications are scarcely represented on Capitol Hill, and largely in part by a rulebook dating back to the 1970s, and a committee that has yet to move forward on revisiting the antiquated rules.

According to the Executive Committee of Periodical Correspondents’ Rules and Regulations, there are five rules and six regulations that applicants must fulfill to be able to be granted admission into the Capitol Hill Press Gallery.

The rule chiefly at issue as the journalistic landscape changes, is the status of nonprofits.

“Applicants must also be employed by a periodical that is published for profit and is supported chiefly by advertising or by subscription, or by a periodical meeting the conditions in this paragraph but published by a nonprofit organization that, first , operates independently of any government, industry, or institution and, second, does not engage, directly or indirectly, in any lobbying,” the rules read.

That applicants must primarily be supported by advertising and subscriptions in order to prove themselves worthy of consideration is an antiquated notion that, when applied to the context of today, excludes a number of POC-led organizations like Latino Rebels and non-profit journalism that is breaking barriers in representation for readers.

The issue of Latino Rebels

In the meantime, Latino Rebels’ Pablo Manríquez has been stripped of his credentials by a mostly-white Periodical Gallery Committee that oversees the accreditation process.

It's a classic case of gatekeeping politics on Capitol Hill, but according to the Periodical Gallery Committee, it’s a simple matter of sticking to the rules.

“Futuro Media was granted temporary Hill credentials while staff reviewed their proposed application to the Periodical Gallery. Those credentials were not renewed after the committee determined it was unlikely they would qualify for permanent credentials,” wrote Leo Shane III, chairman of the Executive Committee of Periodical Correspondents, told AL DÍA in a statement.

He cited this was because of the aforementioned rule where the periodical must be published for profit and supported chiefly by advertising or subscription revenue.

“The rules as written have been in place since the 1970s and would require congressional action to update. The committee has applied these rules to all new applicants in the same manner for the last five decades,” the statement said.

While he said Futuro Media still has an opportunity to petition the committee to explain why they believe they qualify, Manríquez told AL DÍA they would not be pursuing this route.

The core issue is the 50-year-old rules and the unwillingness of the committee to review them, so they align with the present landscape of journalism.

AL DÍA asked the chairman whether the committee has ever considered times are different now versus the 1970s, and if there should be a push from within to revisit these rules and update them, especially because they adversely affect predominantly BIPOC-run publications.

“The committee routinely discusses a variety of issues regarding the gallery rules and the changing nature of the business of journalism,” Shane responded.

“I was too visible,” Manríquez said, citing words the committee used in a complaint to describe his conduct while reporting on Capitol Hill.

What exactly being “too visible” means, he said, is still unclear, but he is one of the sole Latino reporters who maintained an active presence in the Press Gallery over the past month.

Over the past month, he has covered stories for Latino Rebels ranging on what members of congress think of Latin American issues, to his yet-unfinished investigation into sexual assault on janitors on Capitol Hill.

Since his credentials were revoked by the committee, his investigation has been derailed for the time being, but he’s working for that to be a temporary situation.

The real consequence falls on Latino Rebels’ audience — as the questions Manríquez asked Senators had meaning to Latinos that stood apart from what one would read in major outlets.

Reporting on Capitol Hill without credentials isn’t impossible, but because of COVID-19, it makes it harder to ask members of Congress questions directly. Press without credentials are restricted to large sections of access in and around the Capitol.

“I don't think that these people have any context for what a Latino perspective is in the Senate. That’s ultimately a big issue here,” said Manríquez.

“The committee can hide behind tradition,’ he said, adding that ultimately, they're the ones that can begin the motion to revisit the rules.

Latino Rebels founder, Julio Ricardo Varela said it all in a recent Twitter thread, writing: “apparently nonprofit media companies that make less than 51% off of ads & subscriptions are not considered legit media outlets that can cover Congress.”

Varela told AL DÍA News on Thursday, May 13, that throughout talks with the committee to try and mitigate the situation with Manríquez, it didn’t feel as if he were speaking “journalist to journalist.”

After just 1 month of getting a temporary pass to cover Congress for @latinorebels, @PabloReports's pass has not been extended. Been working hard with Pablo to get it renewed even to point of having @SpeakerPelosi's office intervene. They actually tried to help. #LatinoRebelsDCC

Latino Rebels is likely not the first to run into these roadblocks while reporting from the Capitol, but the only way for it to stop happening, and for the Periodical Press Gallery to become more equitable, is to change the rules.

That moment must come from within the Executive Committee. Surely there is a way to vet standards of quality journalism, while also making sure there are more than a couple BIPOC-run publications on Capitol Hill.