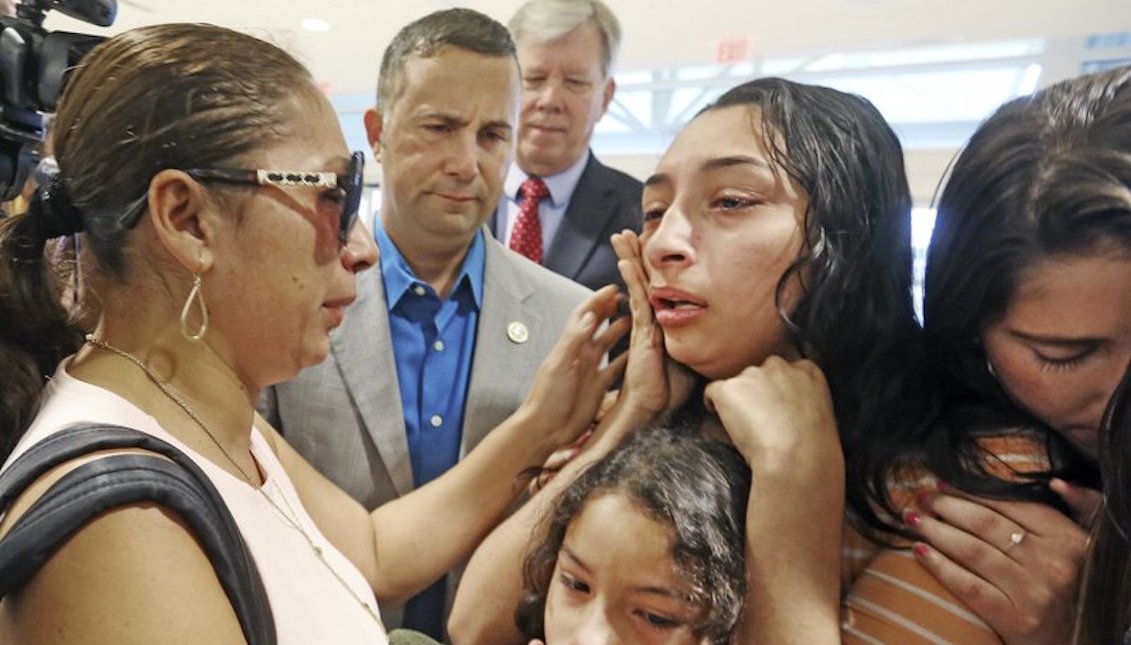 Alejandra Juarez, 39, (L) says goodbye to her children, Pamela and Estela at the Orlando International Airport on Friday, Aug. 3, 2018 in Orlando, Fla. Juarez, the wife of a former Marine is preparing to self-deport to Mexico in a move that would split…

Alejandra Juárez has decided to leave the country voluntarily, choosing to separate her family before Immigration and Customs Enforcement (ICE) deported her.

Sometimes, doing things of your own free will is more difficult than being expelled from the country in handcuffs.

That was the decision that Alejandra Juárez made after having exhausted all options to avoid her deportation.

Saying goodbye to her daughters at the airport, this woman exemplified one of the most heartbreaking aspects of immigration in the United States.

This immigrant of Mexican origin crossed the border into the U.S. in 1998 without documents and married an ex-Marine, Sergeant Cuauhtemoc "Temo" Juarez in 2001, according to the Military Times.

Alejandra introduced the request to become a citizen in 2001 and was rejected because of a misunderstanding of her statements to immigration officials.

After having married a U.S. citizen, working and raising two daughters born in the country, the federal government discovered that Alejandra didn’t possess the regulatory documentation after a traffic incident in 2013, according to the Associated Press.

This Mexican immigrant complied with the immigration demands by regularly checking with immigration officers, who until this administration only gave priority to deportation to people with a criminal record.

Despite being immigrants and having a relative at home without documents, the family voted for President Donald Trump and now they see the consequences of the "zero tolerance" policy implemented by the administration.

Darren Soto, a Democratic representative of Florida, accompanied the family to the airport on Friday and told the media that "it’s an absolute disgrace by the Trump administration to be deporting a patriotic spouse."

However, when it comes to immigrants, the government and its Department of Justice prefer an immigrant less than another patriot.