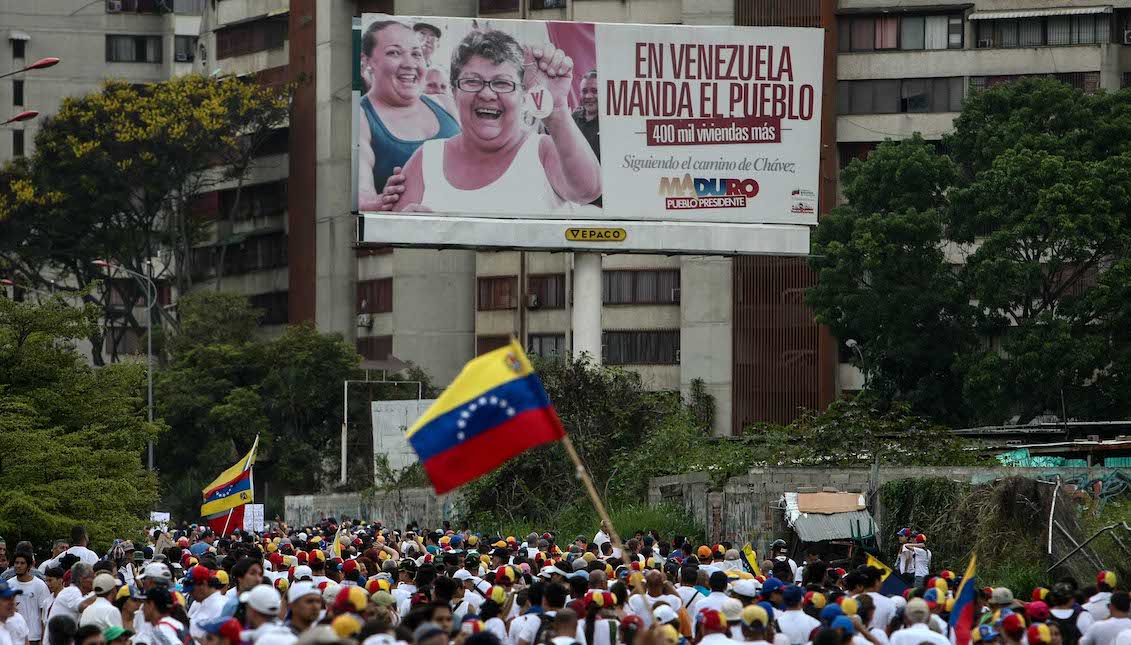 Opponents of the government of Venezuela's President Nicolás Maduro are participating in a demonstration against the national government on Saturday, April 22, 2017, in Caracas, Venezuela. EFE/Cristian Hernández

Venezuelan Opposition will not back down

With a new schedule of demonstrations, the opposition coalition against Nicolas Maduro’s regime will not rest until the government releases political prisoners…

Last week, the Venezuelan opposition called on "the mother of all marches" against the regime of Nicolas Maduro on Wednesday, April 19. The president ordered the Bolivarian National Guard (GNB) and the Civil Armed Groups (a violent group organized by Hugo Chávez to keep the chaos in the streets) to "defend the Revolution", repressing in cold blood those who wanted to exercise their constitutional right to manifest their discontent, and encouraging a pro-government backlash, augmenting chaos and confrontation.

With a death toll of more than 15 and an undetermined number of detainees (estimated to have been more than 500 nationwide), tear gas, shotguns and bullets have not discouraged the overwhelming majority of the opposition who called on Saturday for a silent demonstration "for the fallen", which addressed the Episcopal Conference of Venezuela.

The march of Saturday was so great that it managed to unite the two ends of the city of Caracas, known for being the mirror of the opposite economic realities in Venezuela for decades.

This event will be remembered by many as the moment when the dream of Hugo Chávez came true: for the first time Venezuelans are all the same; equally poor, are equally hungry and suffer the same despair over the failure of an economic model that depleted the country, broke down the oil machinery and sunk the "best kept secret of the Caribbean" in the deepest misery.

Each demonstration has been led by a representative of the Opposition Party, the National Assembly and other opposition leaders such as the wife of Leopoldo López, Lilian Tintori, who has not ceased to demonstrate against the unjust imprisonment of her husband, political leader and opposition presidential candidate.

These demonstrations arose as a result of the Supreme Court's ruling on March 30, in which it assumed the powers of the National Assembly (dominated by the opposition), openly violating the constitution and executing a self-coup of state by definition.

The response was immediate, and the Opposition Party called for a march to the Ombudsman's Office, Tareck William Saab, to denounce the regime's unconstitutional strategy. Three days later Nicolás Maduro reversed the sentence, but the drop had already spilled the glass.

After full days in the sun, on the march, suffocated by tear gas, cornered by armed groups, and violent nights with bursts of bullets in the most needy neighborhoods of the capital, the Opposition does not back down.

Today's call is to the "Great National Struggle", where it has organized the blockade of the main arteries of the country in a peaceful way, inviting all citizens to sit in the streets and obstruct the passage, without inciting violence, But under the clear threat that teak gas and water tankers will again assail against the citizens who intend to exercise their right.

Due to the siege imposed by the Regime on the media, Venezuelans have had to turn to Twitter and Whatsapp to be able to organize and get the information nationally and internationally, because while some are beaten, arrested and suffocated in the streets, Government representatives dance on television or broadcast historically manipulated documentaries.

As opposition leaders have repeated, and in a Venezuela that has nothing to lose, the moment of freedom "is now or never."