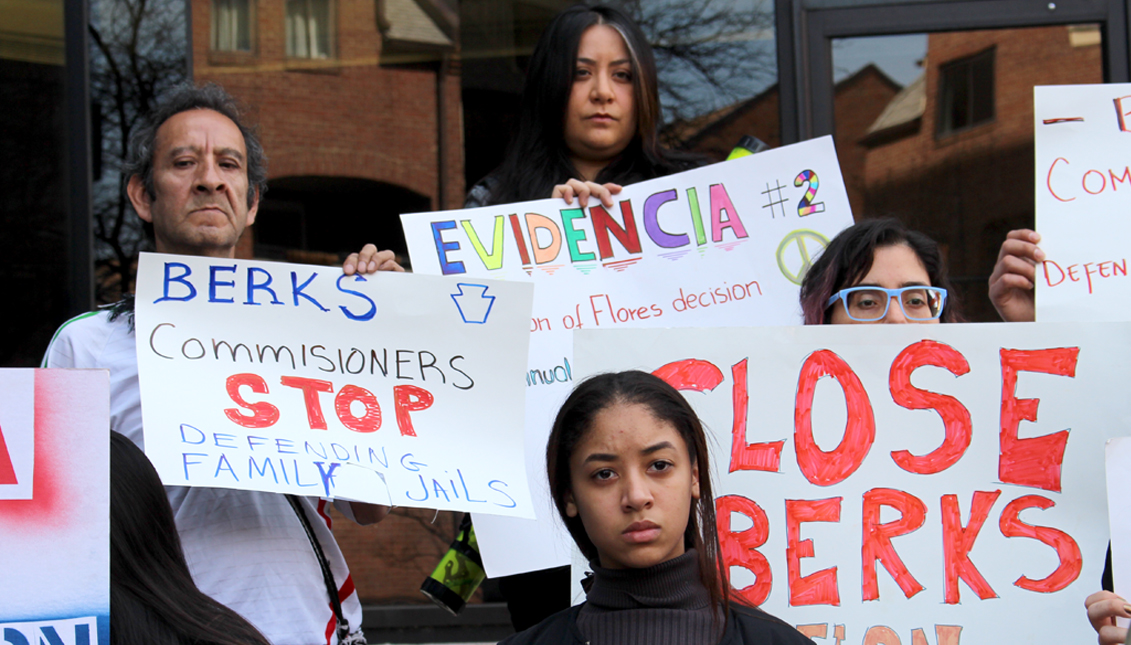 The questionable confinement of 28 Central American immigrant women and their children in Berks County Residential Center, the arbitrary denial of an appeal to…

80 days, 120 days, 276 days, 304 days, 368 days. The clock has been ticking, the sands of the hourglass have been trickling, but for the Madres de Berks, the countdown for their release (and for their children to resume normal lives beyond detention-center walls), has been frozen in time. And, on August 29th 2016, the Philadelphia 3rd Circuit Court ruled that the status of their freedom would continue in a standstill, following the rejection of an appeal to their asylum ruling.

But, the chronology of the legality of the imprisonment of the Madres de Berks goes back further than the month of August, further than their drastic measure to resort to hunger strike(s), and even further than their own initial detainment following immigration raids in February 2016. The issue begins with The Flores Settlement of 1997, recently re-opened in 2014, that declares the following about protecting the rights of migrant families, and consequently, their children:

"With the Flores case, the government basically agreed that they can't hold unaccompanied minors in detention facilities. The original case may have dealt with these specific children who were unaccompanied, but it was about children,” said Jackie Kline, one of three lawyers representing women held at Berks. However, with the immigration surge reported in 2014, The Obama Administration made the removal of new Central American arrivals a top priority. “Up until 2014, they weren't holding them even if they were with their parents, but in 2014 they started to reinterpret that,” continued Kline.

Although the Berks County Residential Center claims that they are “committed to maintaining a safe and caring environment that promotes positive growth and behaviors” on their official website, their detainment of these Madres is anything but that.

In fact, the legality of Berks’ ability to keep these women and their children is questionable, and has caused both the migrants in these facilities and concerned activists in the community to protest the flagrant disregard of the court-ordered mandates of The Flores Settlement.

The Madres de Berks have been subjected to confinement that has unnecessarily and arbitrarily lasted for months; for example, according to Kline, the decision to detain or not to detain immigrants when they are first apprehended is largely based on the number of beds open at government facilities at a given moment. There is no proven risk associated with the Madres as compared to any other immigrants, but I.C.E. decided that the federal case counted as a special circumstance that allowed them to flout the 20-day minimum. Field Office Director Thomas Decker has released three other women, who are not part of this case, since the Madres’ hunger strike began, revealing the political nature- rather than the logical nature- of the confinement. Hence, children under the age of two will have spent more than half of their lives in this detention center.

The Madres’ current legal case exposes irregularities in how the women’s asylum claims have proceeded. Many failed their “credible fear” interviews, which is the initial step towards granting or denying asylum. Kline and her co-counsels plan to appeal the ruling, as these first credible-fear interviews were conducted without the aid of attorneys to soothe the initial process, and in some cases when an indigenous language  or Spanish was spoken, were reportedly denied access to a competent translator. And, according to a blog post by Nicholas Kristof for The New York Times, the Niños of Berks have endured psychological distress during this arduous and delayed detention.

Being detained is distressing itself, but according to Bridget Cambria (quoted in the Philadelphia Inquirer), after the 28 women began their hunger strike, they were further agitated by comments from detention center staff claiming that “if they did not resume eating, they could grow so weak that their children would have to be taken from them.” When the Philadelphia Outreach branch of the I.C.E. was contacted for further information on the wellbeing and protection of the Berks women and children, Khaalid H. Walls responded to us by claiming: “I.C.E. fully respects the rights of all people to voice their opinion without interference.  I.C.E. does not retaliate in any way against hunger strikers.  I.C.E. explains the negative health effects of not eating to our residents.  For their health and safety, I.C.E. closely monitors the food and water intake of those identified as being on a hunger strike.”

Moreover, and perhaps most disturbingly, Berks County Residential Center is functioning on an expired license, refused renewal by the Department of Human Services earlier this year, and currently being appealed by Berks County and federal Immigration and Customs Enforcement (I.C.E). This may be correlational with the fact that the detention center serves as a source of jobs and an income funnel for the county. Though Berks County Residential Center is not run by a private company enjoying lucrative government contracts, the principal ethical problem of the private-prison model still applies: there is an economic incentive to keep as many people detained as possible.

While the Madres de Berks have been receiving more support from the community as attention towards their issue has augmented on a local and national sphere, such as legal counsel and coalition build-up from reputable non-profit organizations such as Juntos, The American Civil Liberties Union of Pennsylvania, and Raíces Culturales Latinoamericanas, leaders have remained mum on the subject, particularly those leaders who have been specifically called out by the Madres de Berks for apoyo, and those leaders who have claimed they are “for” women or  “for” immigration rights.

According to Erika Almiron, Executive Director of Juntos, neither President Obama nor Presidential Candidate Hillary Clinton have released any statements regarding the controversies and human rights violations teeming within the Berks County Residential Center, although the mothers have explicitly called on both leaders for help in a statement released by Juntos, as well as any other leaders who have the power to “take immediate action to get us out of here and end this nightmare.”

But, neither the candidate nor the sitting President have stretched their hands to pull these women and their children out of this strenuous situation. During the Democratic Town Hall hosted by MSNBC on April 25th 2016, Hillary Clinton was questioned by Erika Almiron on the subject of the Berks Mothers, and responded with ambiguity. Her lack of communication surrounding this most recent issue at Berks only clouds her commitment towards immigration reform- particularly the question of immigrant family detention centers- and certainly befuddles the strength of her pro-woman platform.

The Madres’ decision to call on President Obama is incongruous, as The Obama Administration has been at the forefront of expanding and operating these suspect family detention centers, including the other two in Texas. Erika Almiron offered a unique perspective on said matter, musing that The Obama Administration is “allowing these families to suffer so they can serve as examples that will deter” the ever-increasing influx of immigration. However, as Erika continued her musing, she stated that it has been made evident that those who are fleeing from violence or persecution will do anything for their survival, especially for the survival of their children. In short, nothing will deter an immigrant from seeking a better life, even if the risks are blatant.

As the Madres of Berks have been starving for attention, resuming their hunger strike this week, their yearning is only met with silence from those with the power to impact their appeal for a second credible-threat interview, and for their appeal to be released.

When President Obama comes to Philadelphia this upcoming September 13th to endorse Hillary Clinton, one can only hope that the Madres de Berks, their niños, and the concerned public will be given something substantial to chew on.

Research was contributed by Liliana Frankel.