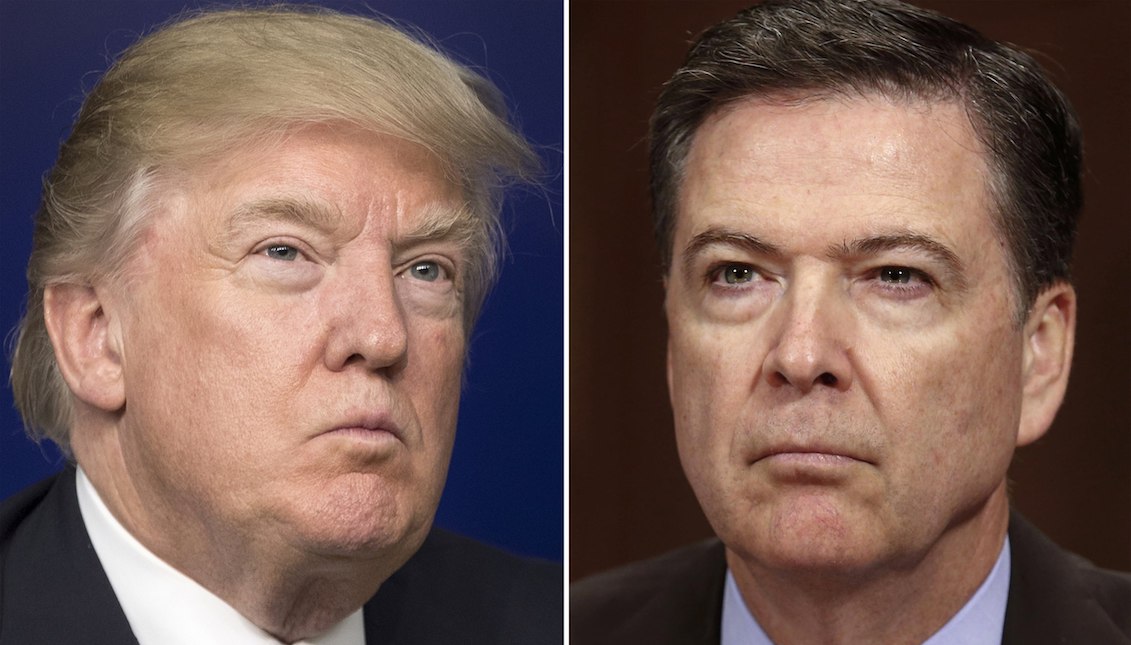 The House Intelligence Committee on May 16, 2017, requested the Federal Bureau of Investigation (FBI) all documents that its former director James Comey elaborated on his talks with President Donald Trump. This request comes after The New York Times…

According to what the New York Times reported yesterday, President Trump asked then-director of the FBI, James B. Comey, to close the federal investigation into former White House national security adviser Michael T. Flynn, during a meeting in the Oval Office in February.

According to the memorandum written by Comey after the meeting, the president would have asked to be left alone with the director, and then insist that he "hoped he could let it go". For the Times, what the FBI director's document describes is clear evidence "that the president has attempted to intervene directly in an investigation conducted by the Department of Justice and the FBI," which suspected ties between the Mr. Trump and Russia.

Immediately after the media made public the existence of the documents of the former FBI Director, the Republican representative and chairman of the House Supervisory Committee, Jason Chaffetz, demanded that the FBI deliver all "memoranda, notes, summaries and records "of the discussions between Trump and Comey.

According to the representative, the documents "would raise questions about whether the president tried to influence or impede" the investigation.

According to two sources, Comey's memorandum details his conversation with the President, carried out the day after Flynn's resignation, and his transcript was part of the FBI director's reaction to a circumstance he found "uncomfortable".

"It was part of a trail of documents that Mr. Comey created to document what he perceived as improper efforts on the part of the President to influence an investigation that was under way," according to the report.

Those who had access to the documents, relate that the President insisted that Flynn "is a good guy" and that he hoped that Comey "could let go" because his adviser had done nothing "wrong." For his part, the FBI director did not respond to the investigation, merely adding that he agreed that Flynn was "a good person."

The conversation would have taken place on February 14, after Flynn was forced to resign for revealing his lack of diligence in informing Vice President Mike Pence of the nature of the talks he had engaged with the Russian ambassador to the United States.

For the new administration, Flynn's resignation should close the suspicions about links between Trump's presidential campaign and the Russian government, but Trump's erratic behavior remains the talk of the media, and the lack of consistency in the statements of the White House’s spokesmen, only throws more wood to the fire.

The only official response has always been to discredit the reliability of the media, which, according to the president, vilify him for having won a majority election popular vote for Hillary Clinton.

But the relationship between what the president says and what he does, doesn’t seem to be congruent.

Just two weeks before the meeting in the Oval Office, the President would have invited James Comey to a private dinner, on January 27, where he had demanded his loyalty to the administration, to which the director refused, arguing that, for his part "there would always be honesty." The matter was revealed by Comey himself once his dismissal became official.

According to analysts, the case could demonstrate some ignorance on the part of the President on political issues and on the impartial nature of agencies like the FBI, also showing that the new head of state still does not distinguish between being a businessman and directing a nation.

One example will suffice to prove it

The scandal over the apparent submission of the President of the United States to the Russian government only grows to spread.

Last week, according to employees close to the White House, President Trump would have shared classified information from an intelligence source of the Islamic State to the Foreign Minister and Ambassador of Russia, during a meeting in his office.

The information had been provided by a counterintelligence agreement considered as sensitive, intended to keep secret some operations, especially from allies like Russia.

The data - which would later be known to have come from Israel - had not been authorized for circulation, and some officials said that Trump's decision put at risk not only cooperation with its allies but the individuals involved.

"This is code-word information revealed more information to the Russian ambassador than we have shared with our own allies”, the Washington Post reported.

If the stage in which President Trump is wasn’t complicated enough - with many cataloguing it as a new version of the Watergate - today Russian President Vladimir Putin has offered the recordings of the meeting between Trump and Russian diplomats to show that the American president had not given any compromising information.

During a press conference in Sochi (Russia) jointly with Italian Prime Minister Paolo Gentiloni, Vladimir Putin ridiculed the furor in Washington, calling it "political schizophrenia," and assured that "if the US Administration considers it appropriate, we are prepared to Provide recordings of the conversation between Lavrov (Foreign Minister) and Trump to the US Senate and Congress, "said Russian President, according to the report by the New York Times.

For the chief Democrat representative on the House Intelligence Committee, Adam Schiff, "the last thing (President Donald Trump) probably needs right now is for Vladimir Putin to be vouching for him," as he told CNN.

For the Democrat of California, Putin's offer represents "yet another twist in the road," adding to the serious circumstances that the President could be facing, especially because it would have to explain why Russian diplomats would be recording their meetings with the President of the U.S.

Schiff said what is needed is for former FBI director James Comey to testify before Congress in a public session, if possible. The only reason the agent has not done so is because he requests the session to be public so the American citizenship can judge for itself.

"After that, we would still have much to investigate to determine what the President asked the director and why," said the representative.

One of the obstacles to the evaluation of the President's behavior is the position of the Republican majority in Congress. But today, one of the GOP lawmakers has declared a change of position with respect to the Trump-Russia case, ensuring that he is willing to appoint a special prosecutor for the case.

We’re speaking of Rep. Adam Kizinger, who said that "the time has come to do what is necessary so that, when all this is over, we can give the American people confidence that justice, by whatever means, has been served "as he said in an interview with CNN.

But Kizinger is only one among a few. While several Democratic representatives have raised their voices on the urgency of a special prosecutor to direct the investigation, only a few Republicans have done so.

For his part, Texas Congressman Al Green took the floor in the House of Representatives this morning to seek the impeachment of President Trump, asserting, “He has committed an impeachable act and must be charged,” as The Guardian reported.

The President is expected to address the cadets at the Coast Guard Academy in Connecticut today, and there will be a glimpse of how he manages the circumstance to get out of this mess.