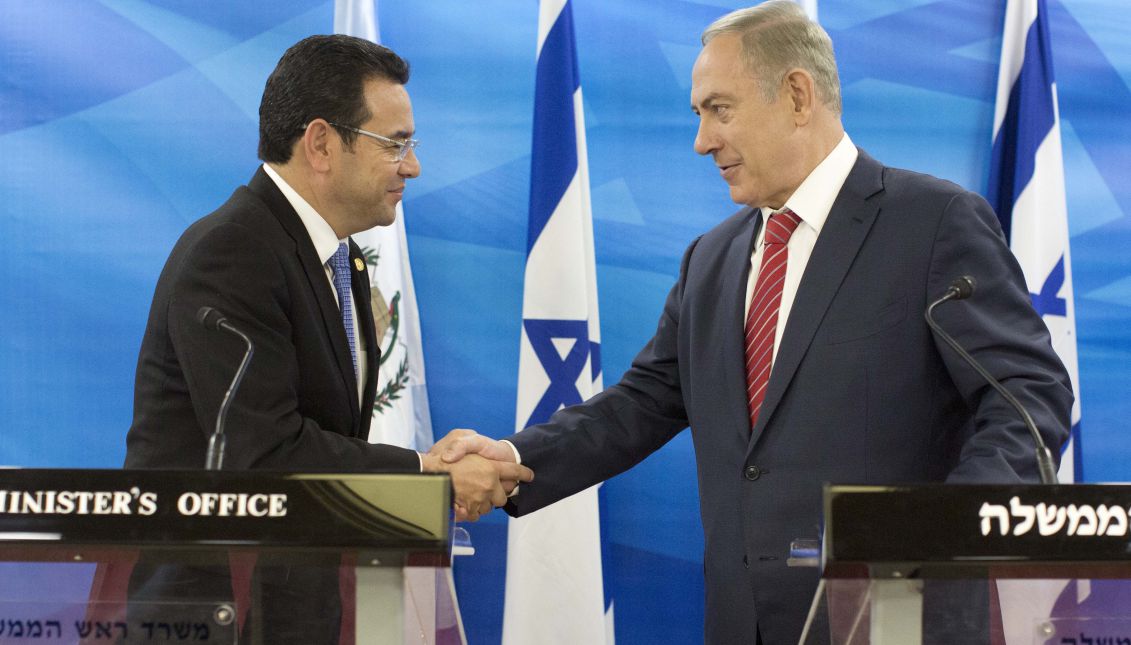 True friends: Guatemala lines up with Trump and will move its embassy to Jerusalem

Morales’s government is the first to follow Trump’s controversial decision to recognize Jerusalem as the capital of Israel.

Last week, the Trump Administration threatened to withdraw US financial aid to all those countries that voted against its decision to consider Jerusalem as the capital of Israel in an extraordinary assembly convened by the UN in New York.

Trump’s “blackmail” had little effectiveness – 128 countries voted against the controversial decision, and 35 abstained. However, there were 8 countries, in addition to Israel, that aligned with the US president, Guatemala, and Honduras among them.

The first one has already taken action: on Sunday, the president of Guatemala, Jimmy Morales, confirmed via a statement on Facebook that he will move his embassy from Tel Aviv to Jerusalem, becoming the first country in the world to follow Trump's decision.

The statement was made after a conversation between Morales and Israeli Prime Minister Benjamin Netanyahu, who celebrated the decision on Monday hoping other countries will soon follow in Guatemala's footsteps: "This is just the beginning and it is important," Netanyahu said.

Honduras could be next. Also, the Czech Republic and Romania are on the list of countries that could imitate Trump's controversial decision, which has dynamited decades of efforts to bring peace to the Middle East, since both Palestinians and Israelis consider Jerusalem as their holy city.

"Until the turn given by the White House, there seemed to be a broad consensus in the international community to make the final status of Jerusalem conditional on the achievement of a peace agreement between Israelis and Palestinians," explained the newspaper El País.

‘A veces despierto temblando’. What does it mean to live under the Guatemalan dictatorship?
May 24th, 2022
The secrets of Chile Cobanero
April 27th, 2022
Former President of Honduras to be extradited to the U.S.
February 15th, 2022

The Israeli army occupied Jerusalem in 1967.

In the UN Assembly, there were 35 countries that abstained, among them Canada and Mexico, trade allies of the United States.

The New York Times points to Morales' decision as an effort to show support for Trump and perhaps "divert attention from the problems at home. His brother and son are being investigated for corruption."

After the vote in the UN, Morales affirmed that it is "of a Christian thought that, in addition to the political, we believe that Israel is our ally and we must support it, even though we were only nine in the whole world, we are with total certainty and conviction that it is the correct route", according to El Mundo.

El País also points out that both President Morales and Guatemalan Foreign Minister Sandra Erica Jovel are Evangelical Christians, a religious community that contemplates Jerusalem through a messianic interpretation of the Bible. "Both in the United States and in Latin America, the evangelical leaders have expressed themselves as open supporters of Israel," the paper continues.

For his part, the president of Israel, Reuven Rivlin, thanked the Guatemalan government via Twitter for their "deep friendship", while the spokesman for Israel, Emmanuel Nahshon, described the Central American country as a "true friend".