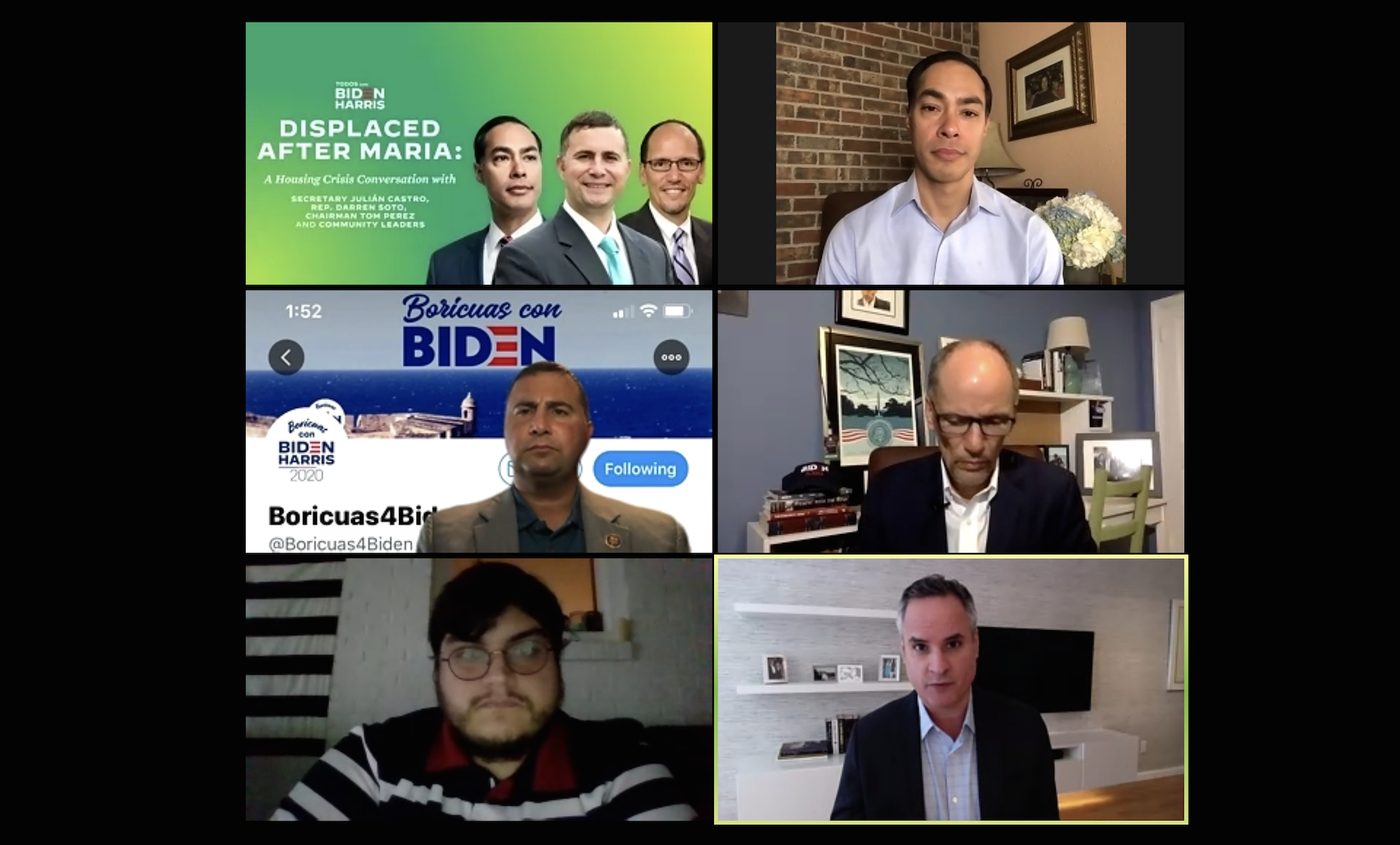 As the roundtable between these leaders took place, Trump announced funding for the island – three years too late. Screenshot: AL DÍA News.

In two days, Puerto Rico will mark the third anniversary of the devastation by Hurricane Maria. Since then, Puerto Rico has suffered two more major natural disasters — Hurricane Irma, and several major earthquakes to start 2020.

The speakers also touched on the news that President Donald Trump released long-overdue funding to rebuild Puerto Rico’s energy grid and other top issues for the island, three years after Hurricane Maria hit.

“I remember traveling there. It was abject destruction everywhere,” said Tom Perez.

He said federal aid so desperately needed was not there “because the Trump administration is treating Puerto Ricans as second class citizens.”

Before Trump’s announcement today, Puerto Rico had only received a third of the $50 billion granted by Congress in 2018 necessary to rebuild. The funding announced today, was initially approved by Congress under the Bipartisan Budget Act of 2018, enacted in February 2018.

“It is the height of cynicism to wait until 46 days before the election to make this announcement,” said Erin Cohan, vice president of the Center for American Progress Action Fund in a statement.

The majority of Puerto Ricans still feel the scars left by the initial disregard and delayed recovery process. The notion of reviving efforts only when an election is in sight is the epitome of disrespect.

“While I certainly hope to see this money put to good use making Puerto Rico’s electrical system more resilient, these delays are unacceptable, and it is insulting to Puerto Ricans everywhere that the Administration is so blatantly playing politics with this aid,” Rep. Nydia Velazquez wrote in a statement.

The effects of Trump’s disregard have not only been felt on the island, but within Puerto Rican communities on the mainland.

Florida was not only also hit by Hurricane Maria, but the Puerto Rican communities have strong ties with families on the island.

“There are 1.2 million Puerto Ricans here in Central Florida. We had to suffer what was a terrible response. This is the deadliest natural disaster in modern American history, leaving 3,000 of my fellow Boricua dead, with a power outage that lasted seven to nine months,” said Rep. Soto.

“Here in Central Florida we welcomed folks as best as we could,” Soto continued.

He said the federal response and lack of programs put in place to help families also fell short. Soto then mentioned Biden's Puerto Rico plan and recent visit to his district, comparing it to Trump's response.

“I was one of the Puerto Ricans on the island,” said Luis Ferrán, a resident of Puerto Rico and Joe Biden supporter also present on the virtual roundtable. “I saw first hand what it was to grab a bucket and drain your house.”

Ferrán also noted, like others, that Trump’s announcement for aid came too late. He called it laughable, saying you can still see the scars of his inaction at the time visible now.

The Trump administration has shown the United States, and Puerto Rico, that when it really wants something, it gets it done. This has been seen through its incessant push for border wall funding and going as far as taking millions out of military funding to do so.

“This is a time when all of us are thinking about our families, about the wellbeing of our families,” Julián Castro said, recalling instances when he accompanied Biden in improving housing while Castro served as HUD secretary under Obama.

Under Trump, Castro said the disrespect will only continue, seen through, “submitting a plan 1000 days late.”